The tourist, who has not be named, was visiting from New Jersey and was caught in the act in the early hours of Tuesday morning, according to reports from local news.

It is claimed that the man, believed to be a student visiting Italy with friends, urinated next to a famed statue of Hercules.

The Loggia dei Lanzi was completed in 1382, and is an open air building to view sculptures and art.

This is not the first time tourists have acted disrespectfully towards Italy’s landmarks – in 2016 three women stripped down to their bikinis to swim in Fontana dell’Acqua Paola.

The tourists caused outrage after they cooled off in a 400-year-old fountain to escape the summer heat. 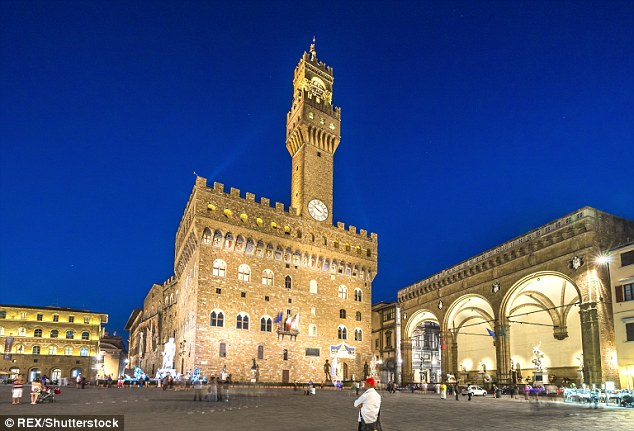 The Loggia dei Lanzi was completed in 1382, and is an open air building to view sculptures and art (file photo)

Locals fumed at their apparent lack of respect for the 17th century monument, after they were snapped in the act, and while pondering on their nationality decided that only the English or Germans would behave in such a ‘rude’ manner.

Temperatures soared to 32C in Rome over that weekend, but locals saw this as no excuse to strip off and take a plunge.

Online magazine Trastevere vented its outrage about the act on twitter, posting: ‘It is very hot but the fountain of the Janiculum can not become a pool x tourists Rome deserves more respect!’