The Australian swimming team has been left reeling after it was revealed freestyle swimmer Shayna Jack was forced to pull out of the World Championships because she failed a doping test.

Jack had dropped out just days before the competition, citing personal reasons, but on Saturday it was revealed she had tested positive for a prohibited substance – tainting the moral high ground of a team that has been incredibly vocal about drug use in athletes.

US breaststroke champion Lilly King was the first to lash out, and told reporters she considers the 20-year-old swimmer a ‘drug cheat.’

Australian team leader Cate Campbell said no member of the Dolphins team knew about Jack’s positive test until it was splashed across the news.

‘I had absolutely no knowledge of this before tonight. All I knew before is that it was a personal matter and we were respecting her privacy,’ she said.

‘I think that we have to respect the process. We stand for clean sport and I think the fact that Shayna isn’t here at the moment strengthens that stance.’

Jack confirmed the positive test on Instagram but said she did not ‘knowingly’ take a banned substance.

‘I did NOT take this substance knowingly. Swimming has been my passion since I was 10 years old and I would never intentionally take a banned substance that would disrespect my sport and jeopardise my career,’ she posted.

‘Now there is an ongoing investigation and my team and I are doing everything we can to find out when and how this substance has come into contact with my body.’

Jack said she was finding the allegations ‘very hard to cope with’. 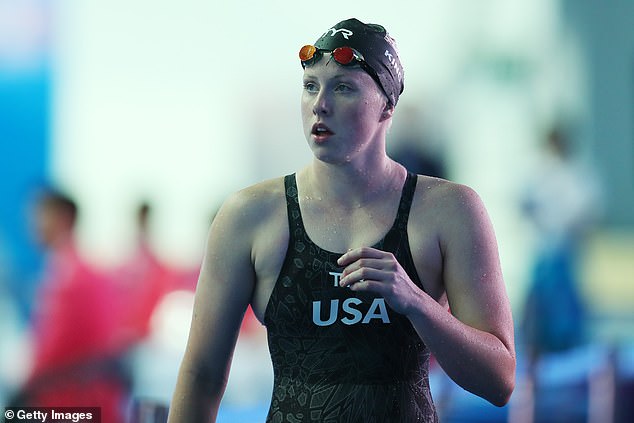 Revelations of Jack’s failed test come after a series of strong moves by the Australian team to denounce drug cheats, with the most notable Mack Horton’s refusal to stand alongside Chinese swimmer Sun Yang.

Horton refused to join Sun – who served a drug ban in 2014 – on the podium after the Chinese star relegated him to 400m freestyle silver, sparking an international furore.

Swimmers were angry that Sun had been allowed to contest the titles ahead of a Court of Arbitration for Sport hearing in September that may end the 11-time world champion’s career.

He faces a lifetime ban if found guilty of charges that he smashed vials of his blood with a hammer in a clash with testers in September 2018.

However, Sun claimed he was standing up for other athletes during the now infamous clash.

Sun has maintained his innocence, and said his presence at the championships is a protest of its own, against unauthorised drug tests.

He took a final dig at his biggest critic, Horton, on Friday night before leaving Gwangju, South Korea.

‘There are millions of swimmers in the world. A couple of guys won’t influence me,’ the 200m and 400m gold medalist told reporters.

‘I don’t want to get into a fight with those haters. Mack will then just answer back and the whole thing escalates and turns into a tit-for-tat.’ 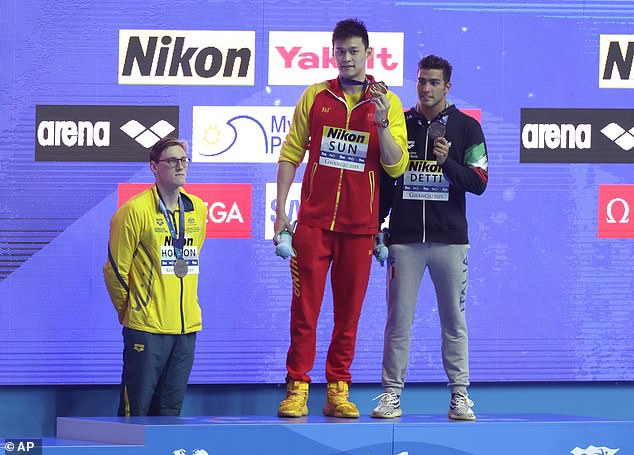 Australia’s Mack Horton (left) refused to join Sun (middle) – who served a drug ban in 2014 – on the podium after the Chinese star relegated him to 400m freestyle silver, sparking an international furore