In a look-ahead to how the US would fight in conflicts, allies will get access to a ‘combat cloud’ for information, according to a top American general.

Under the Pentagon’s plan, dubbed ‘Extended Maneuver,’ allied soldiers would be able to use biometrics – such as fingerprints – to access US data during a conflict. The system would share data across all forces and be safe against hacking.

The plan could be in place by 2030, Vice Chairman of the Joint Chiefs Gen. John Hyten said this week.

‘Even our closest allies, they can’t get onto our basic secret system, SIPRNET,’ Hyten said, during the launch event of the National Defense Industry Association’s Emerging Technologies Institute on Monday, FCW reported.

‘Friends are our biggest advantage but not being able to take full advantage…is just wrong,’ he added. ‘The data has to flow everywhere.’

The change came about after the US suffered a crushing loss in a wargame last year.

The simulation involved a hypothetical battle between the US and China over Taiwan. Early in the exercise, the US lost access to its information systems.

‘What happens if right from the beginning that information is not available? And that’s the big problem that we faced,’ Hyten said.

The US ‘failed miserably’ in a war games exercise in 2020, solidifying the Pentagon’s need to modernize. Above, US soldiers during a military operation

‘Without overstating the issue, it failed miserably.’

‘An aggressive red team that had been studying the United States for the last 20 years just ran rings around us. They knew exactly what we’re going to do before we did it.’

As a result of the simulation, which involved hundreds of senior military personnel, the US will fundamentally change its guiding principles, the Telegraph reported.

‘We basically attempted an information-dominance structure, where information was ubiquitous to our forces,’ Hyten said according to Defense One. 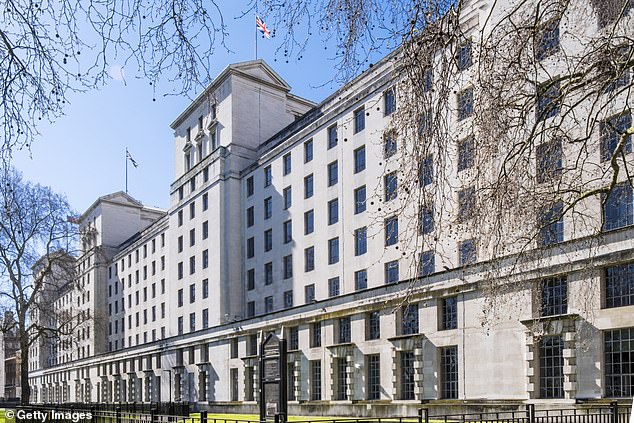 By 2030, allied soldiers should be able to access US military information during conflicts using biometrics. Above, the Ministry of Defense building in London

But the old tactics weren’t enough.

Hyten released four directives to the armed services earlier this month, including plans to use rockets to get cargo in and out of battlefields and using ‘virtual aggregation’ of mass fires to operate from different places.

‘We always aggregate to fight, and aggregate to survive. But in today’s world, with hypersonic missiles, with significant long-range fires coming at us from all domains, if you’re aggregated and everybody knows where you are, you’re vulnerable,’ Hyten said.