A US veteran has received the world’s first total penis and scrotum transplant after losing both legs and his genitals to a bomb blast in Afghanistan.

The young man, who declined to be identified, is expected to regain all sexual and urinary functions within a months if not years.

Nine plastic surgeons and two urological surgeons were involved in the 14-hour surgery on March 26 at Johns Hopkins – the same team that performed the country’s first bilateral arm transplant in a wounded warrior.

They transplanted an entire penis, scrotum without testicles and part of the abdominal wall all from a deceased donor. The donor’s testicles were removed for ethical reasons to avoid risk of having his babies.

‘It’s a real mind-boggling injury to suffer, it is not an easy one to accept,’ the patient said.

World first: The young man (pictured), who chose not to be identified, lost his genitals and both legs above the knee in Afghanistan. He received the world’s first total penis and scrotum transplant in a 14-hour surgery on March 26 at Johns Hopkins

‘When I first woke up, I felt finally more normal… [with] a level of confidence as well. Confidence… like finally I’m okay now.’

Having now recovered from the surgery, he is expected to be discharged from the hospital this week.

The move is groundbreaking, and paves the way for the many other soldiers who have sustained genital injuries during combat.

‘We are hopeful that this transplant will help restore near-normal urinary and sexual functions for this young man,’ Andrew Lee, M.D., professor and director of plastic and reconstructive surgery at the Johns Hopkins University School of Medicine, said.

The team has been working towards this milestone for years. It is part of a major program to give 60 soldiers penis transplants.

There have been two penis transplants in the world to date. The first in China in 2006 was unsuccessful, while the second in South Africa in 2014 was a success. The South African patient, who is now 24, even fathered a child in 2016.

However, this is the first time a team has perform a total penis and scrotum transplant.

The patient started working with the Johns Hopkins team in 2012 as he refused to believe the military doctor who said there was no way back, according to the New York Times.

Finding director of pediatric plastic and reconstructive surgery Dr Richard Redett, he said, pulled him out of a total sense of loss, taking his pain medications longer than he needed to just to numb his mind.

While they could have created a penis from the patient’s own skin, it wouldn’t allow him to regain everything – a prosthetic implant would be necessary to achieve an erection, and that comes with a much higher rate of infection.

Many veterans also tend not to have enough viable tissue from other parts of their bodies to work with, including this patient.

After surpassing the high bar of necessary requirements (he needed to still have a urethra and a specific set of blood vessels), the patient decided to trust Dr Redett that it was worth waiting for a donor penis to transplant.

The alert finally came in March that a donor was available in another state. The three surgeons flew from Maryland to retrieve it, before coming back for the 14-hour, 25-surgeon operation. 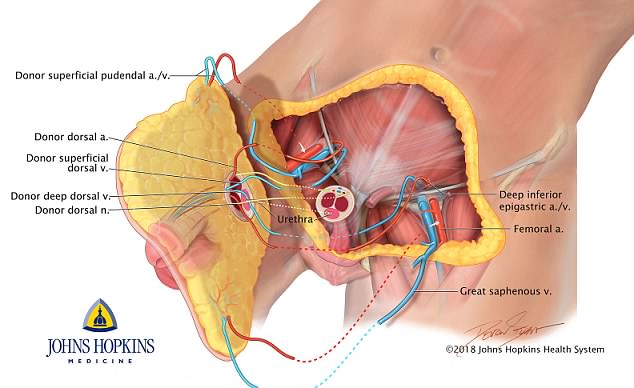 Nine plastic surgeons and two urological surgeons were involved, transplanting an entire penis, scrotum without testicles, and part of the abdomen

This type of transplant, where a body part or tissue is transferred from one individual to another, is called vascularized composite allotransplantation.

The surgery involves transplanting skin, muscles and tendons, nerves, bone and blood vessels. As with any transplant surgery, tissue rejection is a concern.

The patient is put on a regimen of immunosuppressive drugs to prevent rejection.

The team has developed an immune modulation protocol aimed at minimizing the number of these drugs needed to prevent rejection.

Within a few months, he will be able to urinate again, as the nerve endings start to grow.

According to a report released last year, 1,367 male US service members sustained one or more genitourinary (GU) injuries between October 2001 and August 2013.

The majority of injuries involved the external genitalia including the scrotum, testes, penis and urethra, which can impair several abilities including having sex, fathering children and urinating normally.

Almost 94 percent of the sufferers were 35 or younger ‘during their peak years of sexual development and reproductive potential,’ according to the US Department of Defense’s TOUGH (Trauma Outcomes and Urogenital Health) report.