US wife of Barcelona victim seeks last person who saw him

The wife of the American man killed in last week’s Barcelona terror attack is trying to find a waiter who may have been the last person to see her husband alive.

Jared Tucker, from California, was one of the 13 people who died when a van mowed down pedestrians on the La Rambla on August 17.

A photo posted on social media showed the 42-year-old being helped by someone who looked like a waiter.

Now his wife, Heidi Nunes-Tucker, is now trying to track the stranger down.

Mrs Nunes-Tucker, of the San Francisco Bay Area, said on Tuesday she does not have a copy of the post, but she and her family would still like to thank the man.

Heidi Nunes-Tucker with her husband Jared Tucker during a visit to Venice, Italy. Jared Tucker, a California resident along with his wife were ending their European vacation in Barcelona when he was killed 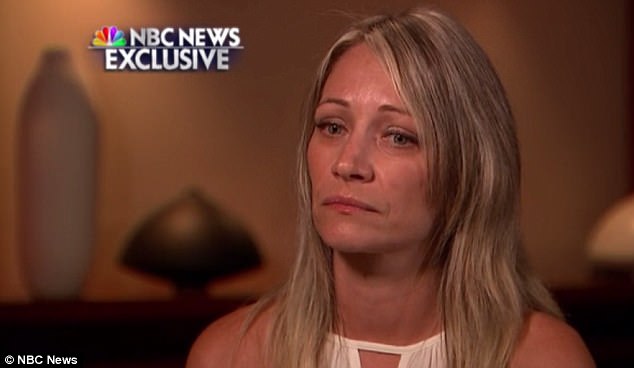 A photo posted on social media shows the 42-year-old being helped by a waiter and his wife, Heidi Nunes-Tucker (pictured above during an interview with NBC), is now trying to track the stranger down

‘We are trying,’ she said. ‘It looks like he was helping and anybody that stopped to help amidst the chaos … that’s just a testament to the helpfulness and the love people can have for one another without even knowing one another.’

Mrs Nunes-Tucker said she saw the image shortly after the attack while she was searching for her husband but now cannot find it.

If the man was a waiter, she thinks he worked at a brew pub among the many bars and restaurants along Las Ramblas.

At least 100 people were injured during the rampage. A second attack hours later in the seaside resort of Cambrils left two more people more dead.

Mrs Nunes-Tucker said her husband would have been among those helping the wounded on Las Ramblas if he had survived.

‘He was very brave,’ she said. ‘He loved to help people. That’s what he did.’

The day the couple left for their European vacation, which also included Paris and Venice, her husband cooked a feast for friends who had just returned home from the hospital after having a baby.

‘He spent the entire day cooking enchiladas so we could take it to their house so they didn’t have to worry about cooking, and he still hadn’t packed, and we were leaving hours later,’ she said. ‘He was always thinking of others first. Never himself.’

Mrs Nunes-Tucker said she expected to remain in Barcelona for several more days because her husband’s body was being prepared for her to take home to Lafayette, California. 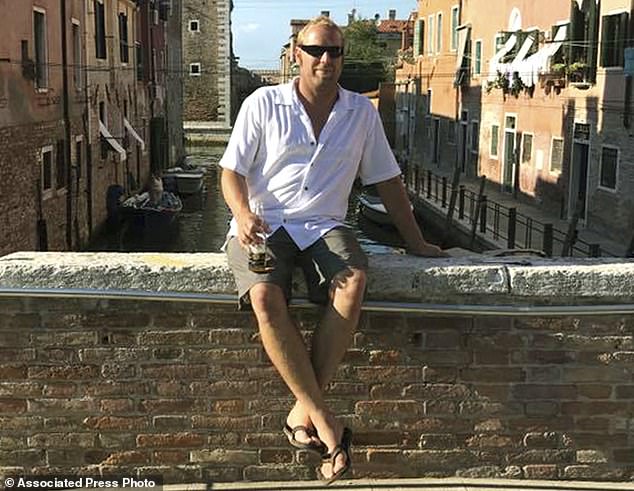 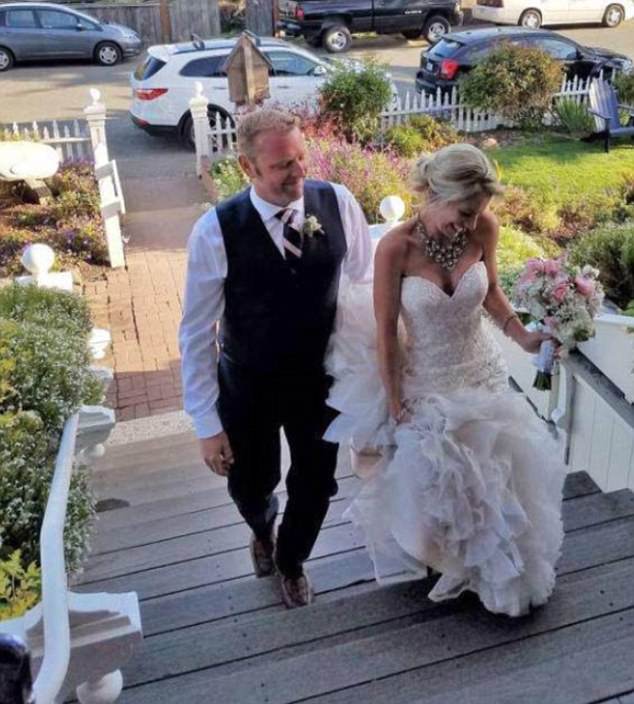 Mrs Nunes-Tucker said she first met her husband at an annual art and wine festival in Lafayette in 2012.

‘I kept seeing this extremely handsome surfer guy throughout the day and I kept telling friends, “Look at that cute guy, there he is again,”‘ she said.

When she later noticed the handsome stranger leaving, a friend went and brought him over.

‘He came and sat next to me and we hung out the rest of the night at the festival,’ she said. ‘We danced and we were pretty much inseparable after that. It was an instant connection.’

‘He walked in the door carrying some groceries I had asked him to get and he starts crying – he doesn’t hardly get through the doorway,’ she said. 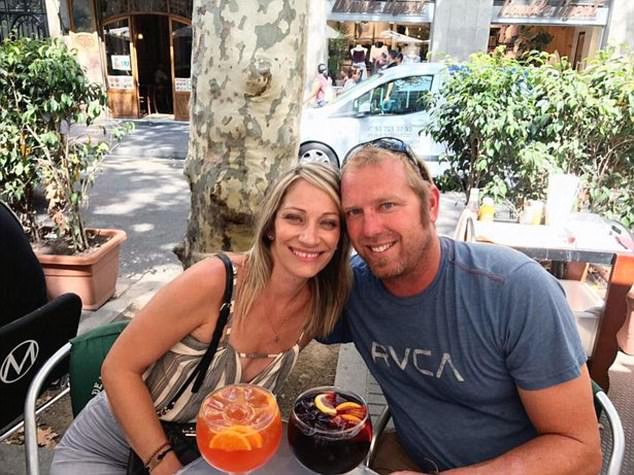 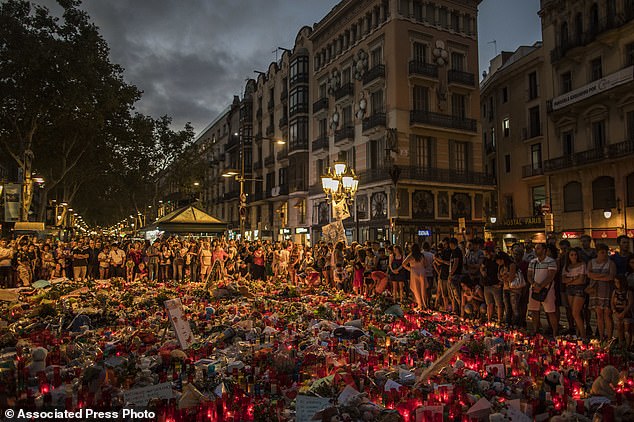 People stand next to candles and flowers placed on the ground, after a terror attack that left many killed and wounded in Barcelona

‘He got on his knee and said, ‘I don’t want to live life without you and I have something to give you.’ And he had a ring.

The two had a blissful life, the sixth-grade teacher said, with her husband working in his family’s business remodeling swimming pools. She has a son and he was the father of three daughters.

‘As far as matters of my heart go, I have lost everything. He was my heart and my soul,’ Nunes-Tucker said. ‘Waking up next to him and going to sleep next to him was all I wanted to do. He was my person.’ 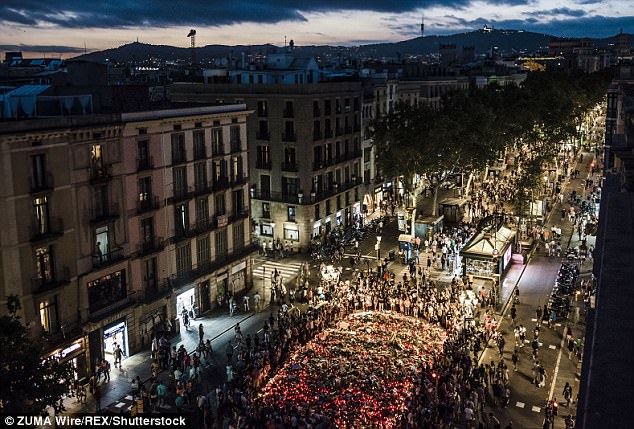 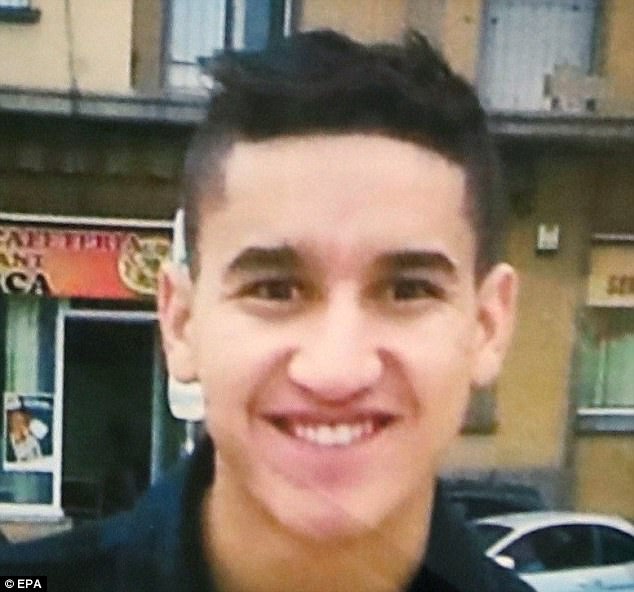 Younes Abouyaaqoub, who police believe was the van driver, was shot and killed on Monday by police in the town of Sant Sadurni d’Anoia in the district of Subirats

Mrs Nunes-Tucker did not have much to say about the men who planned and carried out the attack.

Six were killed by police, including the suspected van driver Younes Abouyaaqoub, two more died in an explosion at a house where authorities said bombs were being prepared and four surviving suspects were questioned by a judge in Madrid on Tuesday.

‘The only thing I would say is as a mom and as a teacher, I feel like it’s so important to continue to teach our children to be kind, to be tolerant, to love one another,’ she said.

‘Jared would not have wanted to focus on any sort of hatred or intolerance. That was just not what he was about at all.’