James Rodriguez suffered a nightmare season, but this was a dream start to the Copa America Centenario, with the Real Madrid star’s penalty and Cristian Zapata’s cool finish from a corner helping Colombia see off hosts USA in the opening match.

Colombia took just eight minutes to open the scoring, with centre back Zapata deftly flicking the ball beyond Brad Guzan, before James doubled the lead from the penalty spot minutes before half-time, leaving America seeing stars and stripes.

USA had plenty of spirit but lacked creative nous and bar a couple of long-range Clint Dempsey efforts and a Geoff Cameron header that was hacked off the line, they didn’t come close to getting one past Arsenal’s David Ospina. Most of the entertainment for their fans came from the pre-match performance by Jason Derulo at the opening ceremony. 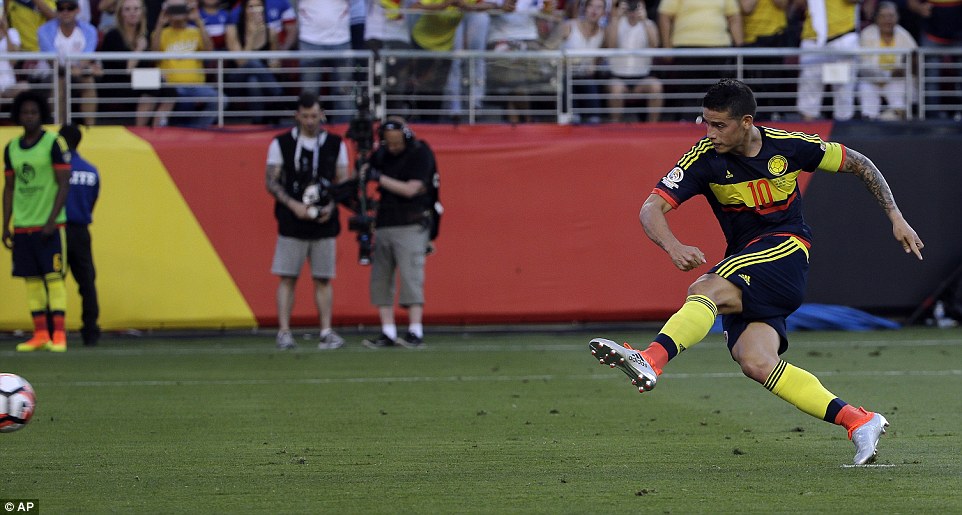 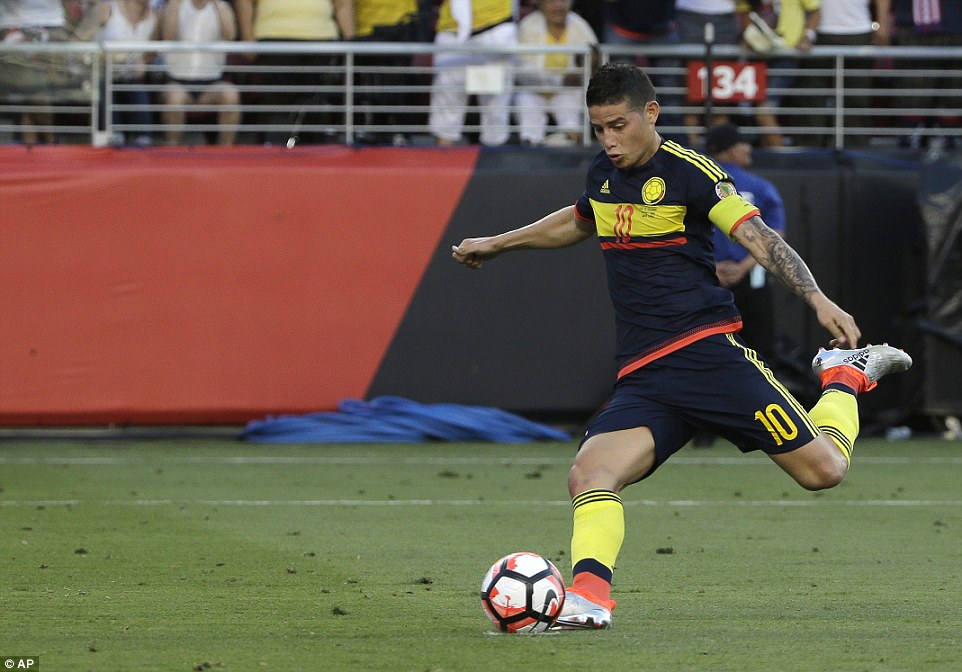 The tens of thousands of Colombians packed into the stadium, by contrast, were having a wild time.

‘We’re absolutely okay with the team’s performance,’ insisted Jurgen Klinsmann after the game, despite the disappointing result and the lack of opportunities created. ‘There was no difference [between the two teams], besides the two goals.’

The coach has rotated his backline so often that it can hardly come as a surprise that they aren’t totally organised, but conceding so early was an unpleasant surprise for the fans crammed into the Levi’s Stadium.

It was a fine finish from Zapata, but there was a notable lack of marking from the corner kick, with the AC Milan defender left to his own devices.

By contrast, Colombia’s defence and midfield were sharp, and although the game flowed end to end, by the 30 minute mark the US had been restricted to a couple of free kicks as their only chances of note.

At the other end Cardona juggled the ball brilliantly in the box, one way then the other, but his eventual shot was weak.

Sebastian Perez was also denied by Guzan, with his low strike from distance well fielded.

The US went close when Dempsey broke away towards the box, floating an effort inches wide of Ospina’s right-hand post. The Gunners shot-stopper was rooted to the spot and the crowd roared, fooled momentarily, because the effort seemed destined for the top corner. 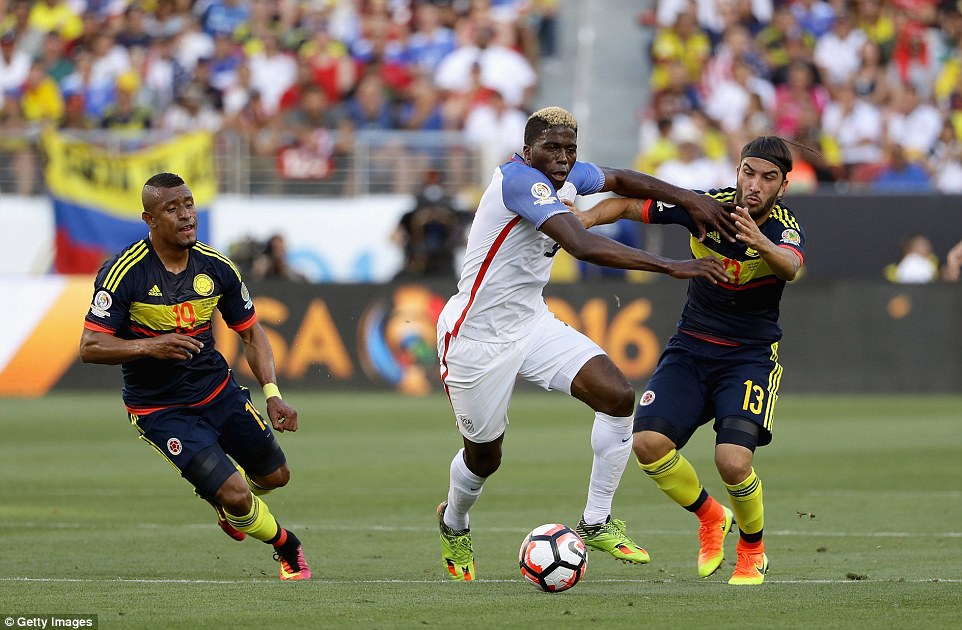 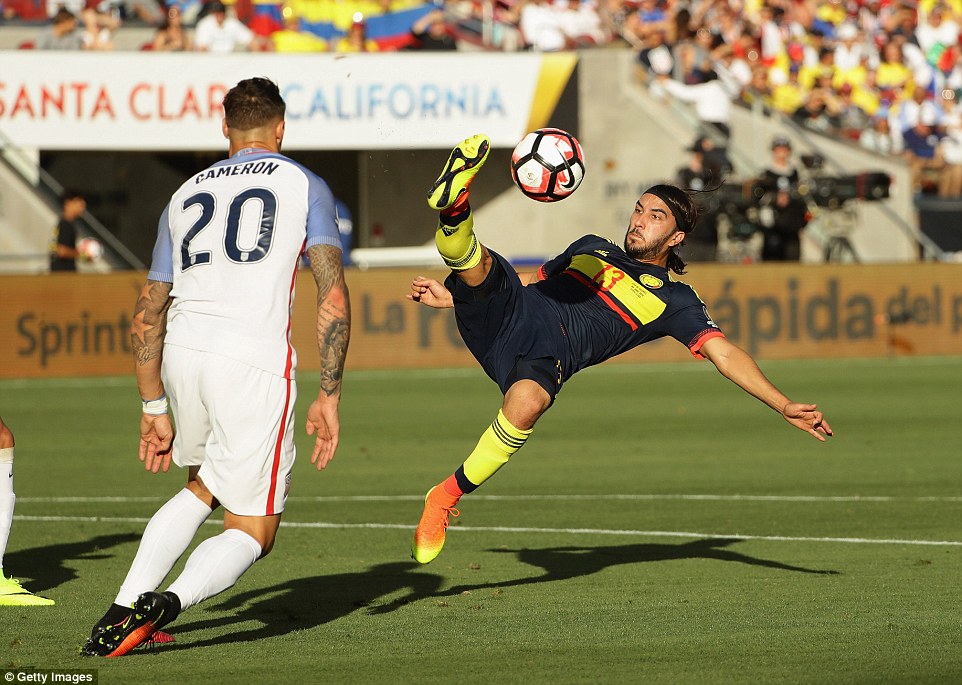 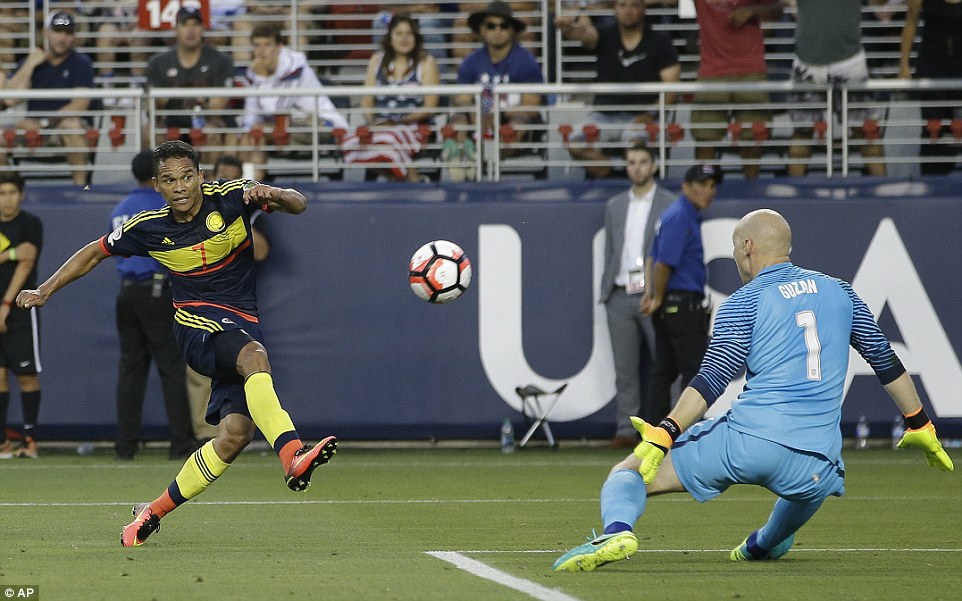 It could have been 1-1, it was soon 2-0. Farid Diaz whipped the ball in from the left and it clipped DeAndre Yedlin’s arm, which was in an awkward position. It was a little harsh and the US made that clear to Mexican referee Roberto Garcia, but he wasn’t for turning.

Colombia captain James took it, dispatching it low and hard into the bottom-right corner.

It was a wonderful moment for James, a burst of joy after a season in which he’s been forced to sit glumly and watch on from the sidelines, not in Rafa Benitez or Zinedine Zidane’s good books at the Santiago Bernabeu.

Colombia’s substitutes spontaneously rushed onto the pitch to celebrate with him, too.

Even if the Copa America Centenario can justly be criticised, on various counts, from the reasons for holding it to the organisation of the event itself, it clearly still matters. And if this thrilling clash is anything to go by, it will be a splendid tournament.

The finest moment of the hosts’ first-half display came when Geoff Cameron robbed James before dancing his way past Daniel Torres with a roulette. It brought roars of delight from the crowd, but they were given little else to cheer.

The States nearly pulled one back early in the second half when Cameron’s header was blocked by Perez on to his post, after Michael Bradley’s corner. Then Dempsey drew a brilliant save from Ospina with a free kick that was seeking the top-right corner, until the Arsenal No 2 clawed it out.

Klinsmann threw on 17-year-old Borussia Dortmund midfielder Christian Pulisic and Darlington Nagbe as he tried to give his team more creativity, hoping to capitalise on a good spell, and while they helped continue their side’s domination of the ball in the second half, chances were not forthcoming. 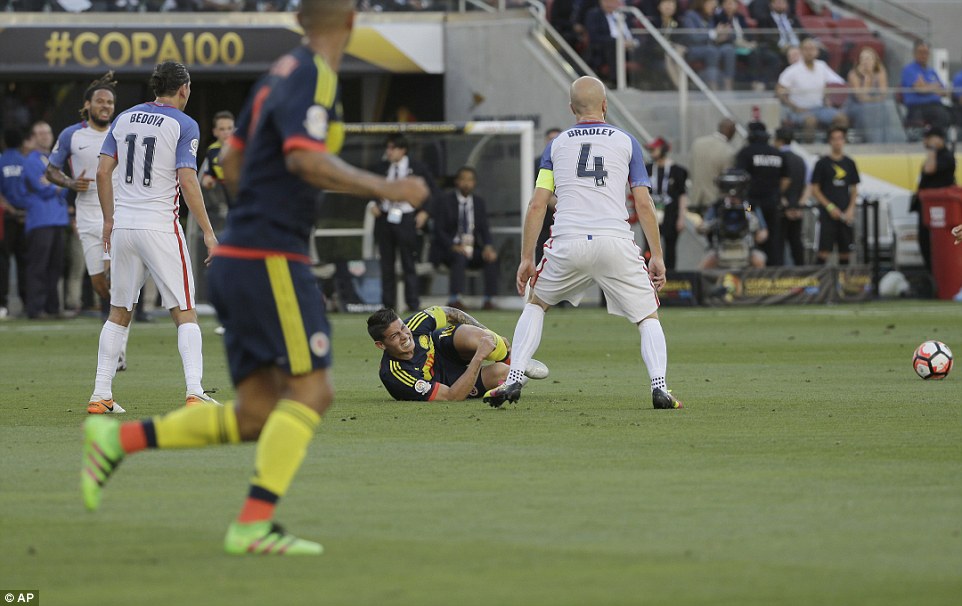 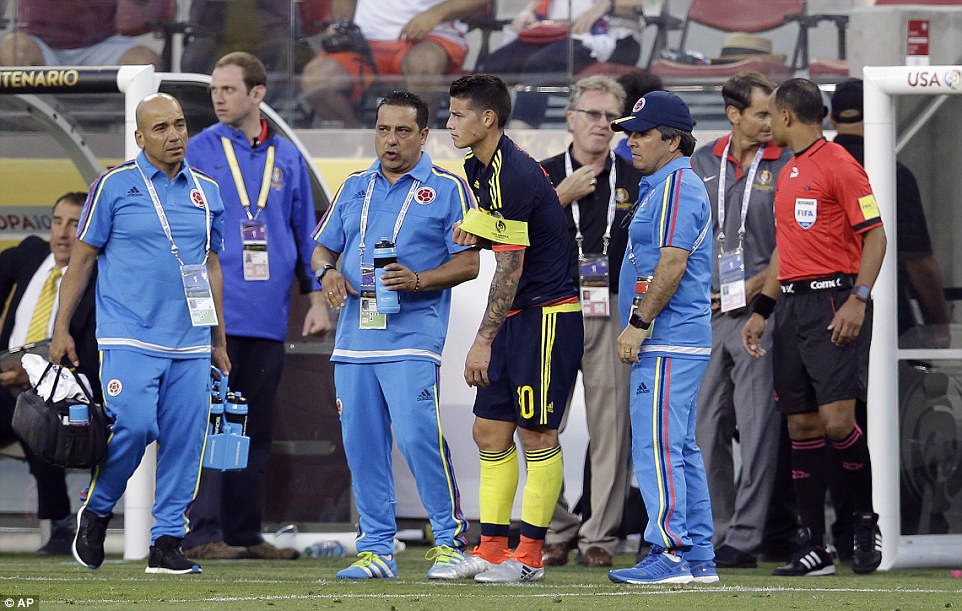 Instead Colombia nearly sealed it, with Bacca breaking clear of the backline and blasting the ball off the crossbar. The finish didn’t match his intelligent run, which split the defence perfectly.

Los Cafeteros’ biggest problem of the night came when James went down hard on his shoulder after challenging for the ball. He was substituted and Jose Pekerman will be praying it was just discomfort caused by the impact, rather than a serious problem.

‘For James [injury prognosis] we’ll have to wait until tomorrow,’ said the coach, in his post-match press conference. ‘James is a fundamental player for Colombia, and we know the desire he has to play.’

Along with Cardona and Chelsea’s Juan Cuadrado, who continued his good form which he showed at Juventus, a whirling dervish down the Colombia right, James formed part of an attacking midfield trio that saw the USA run themselves into the ground to keep up with their quick passing.

Some Colombia players fell to their knees at the final whistle and pointed at the sky. If this was their reaction to a win on the opening day of the Copa America Centenario, who knows what they will produce if they lift the trophy at the end?

‘The first goal gave us confidence, but the opponent demanded a lot from us,’ added Pekerman. ‘We found the passes between the lines that we were looking for. The United States are a competitive team, but we could have scored a couple more.’

This was a weak way for the hosts to start the tournament, proof they are still some way off measuring up to both Europe and South America’s big sides.

Their bid is not over, but they need to attack Costa Rica and Paraguay with more accuracy and conviction than they showed here, if they are to keep flying the flag at their own event.

There were fireworks after the national anthem played before the game, but that’s where they stopped, as far as the USA were concerned. 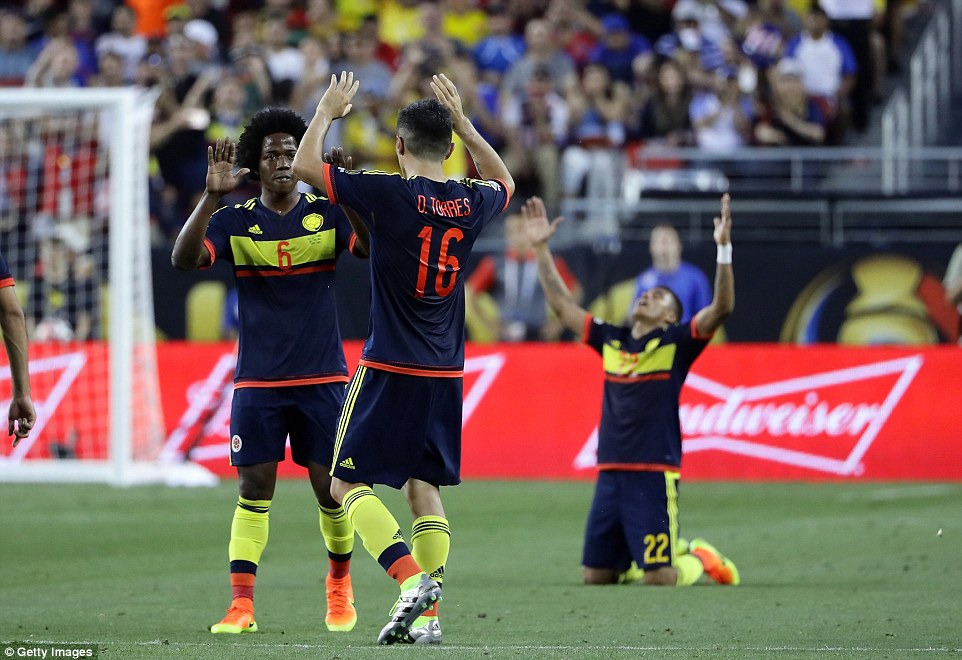