They had to sweat for it. Particularly after DeAndre Yedlin’s red card—he was idiotically booked twice in the space of a minute early in the second half—but the United States of America held off Paraguay to seal their place in the Copa America Centenario quarter-finals.

Jurgen Klinsmann insisted his men had to go out there and ‘rock it’ and while this was anything but an emphatic victory, it was a deserved triumph against adversity, even if it was adversity of their own creation.

The USA coach refused to make any changes, meaning he picked the same team for all three group games. It was what was expected; he kept faith in his men after a poor showing in their 2-0 defeat by Colombia and they paid him back with a 4-0 win over Costa Rica, and then this clash.

Despite progression being on the line for both teams, it had been a relatively quiet opening period, with Clint Dempsey’s strike eventually kicking the game into a higher gear.

Before the former Fulham and Tottenham man found the net the only clear chance had been created by Paraguay, when Miguel Almiron raced through on goal with the ball, and two team-mates in support.

Only John Brooks stood between him and Brad Guzan’s goal, but the centre-back made a brilliant tackle to shut down an attack which should have produced the game’s first goal.

That came when Jermaine Jones fed Gyasi Zardes down the left, who zipped past Paulo da Silva and fired in a low cross, which Dempsey drilled home to widespread delight in Philadelphia’s Lincoln Financial Field.

It should have been an easier night from there on out for Klinsmann and his men, but the game soon became complicated.

Guzan made a superb save after Dario Lezcano reached Antonio Sanabria’s fine through-ball, he drifted in towards goal but his effort was saved by the onrushing goalkeeper. 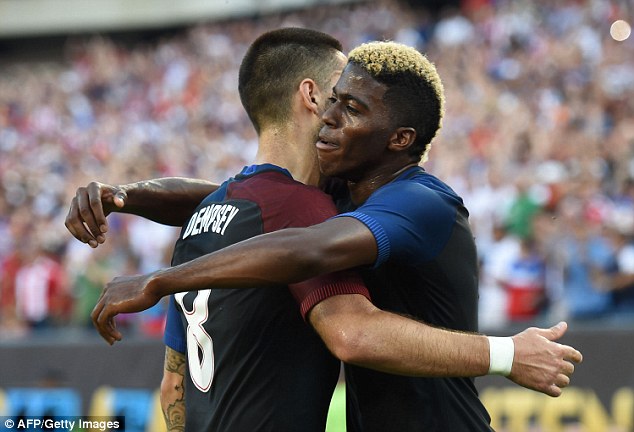 Dempsey, left, celebrates with his team-mate Gyasi Zadres after scoring the only goal of the clash

Then, three minutes into the second half, came Yedlin’s moment of madness.

The Tottenham defender was booked for a thunderous challenge on Almiron, perhaps a little harshly, but there was no doubt about his second booking, less than one minute later, for a late, clumsy foul on Miguel Samudio, which left referee Julio Bascunan no choice but to dismiss him.

Yedlin’s red card made things harder still for the hosts and Dempsey was sacrificed for Michael Orozco, as Klinsmann brought on a new right-back. 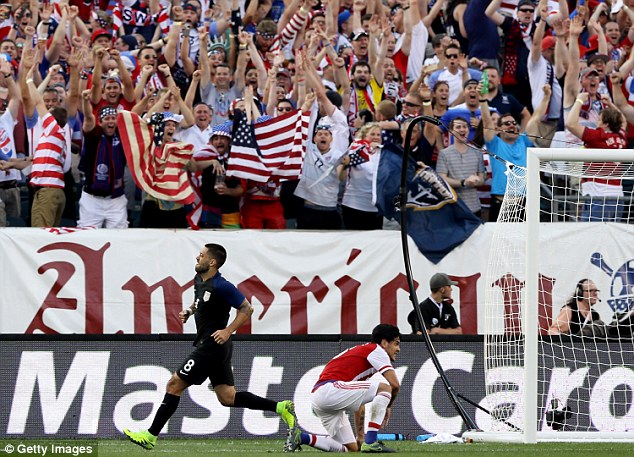 Despite their numerical disadvantage, the USA took to their task with relish. They gave as good as they got and Zardes wasted a fine chance when he broke in down the left but couldn’t get a shot away and was closed down.

At the other end Guzan was the hero as he denied Jorge Benitez, after the Paraguay substitute’s magical footwork in the box earned him a sight of goal from just a few yards out.

Kyle Beckerman zipped a strike over the angle of post and bar with four minutes left on the clock as the USA searched for the second goal which would have sealed their victory. 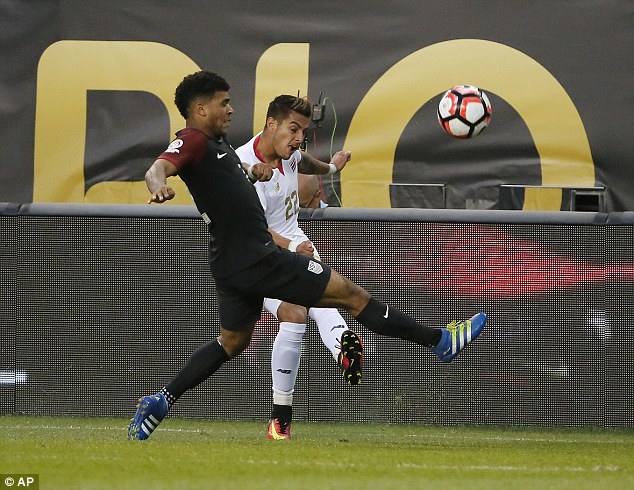 There was a late scare as Rodrigo Rojas struck for Paraguay, but he was correctly adjudged to be offside from Victor Ayala’s cross.

Despite six minutes of stoppage time being added on, the hosts held out and earned a creditable victory over a team that has done well in recent editions of the Copa America.

Klinsmann’s dream is that his team will be able to compete against South America’s traditional superpowers and with a quarter-final clash against Brazil a possibility, he may get a chance to put his men to the test.