Clint Dempsey drove the United States of America to the Copa America semi-final for the first time since 1995 as they saw off Ecuador in a thrilling clash in Seattle, which saw both teams reduced to 10 men.

The forward has been the tournament’s best player and he shone on home soil, scoring the opening goal and setting up the second for Gyasi Zardes.

Antonio Valencia and Jermaine Jones were sent off in the second half as the game grew increasingly heated, but the USA held their nerve after Michael Arroyo’s strike pulled Ecuador back into it. 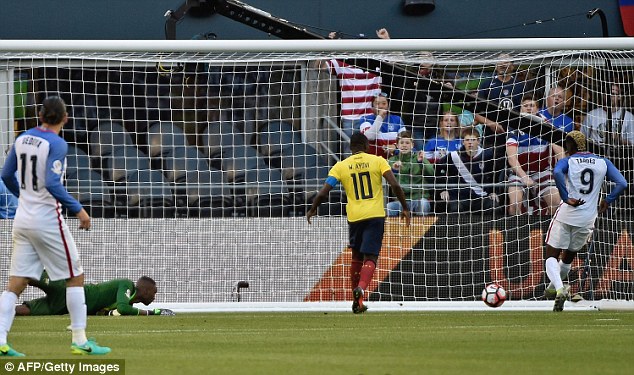 USA coach Jurgen Klinsmann had selected the same team for the first three games of the tournament but was forced into a change by DeAndre Yedlin’s foolish red card against Paraguay.

Instead of opting for back-up right-back Michael Orozco, he pulled off a classic Klinsmann tinker, moving his usual left-back Fabian Johnson to the opposite side and handing Matt Besler his first start of the tournament in his place.

And like most things have done after their opening day defeat by Colombia, it came up trumps for the USA. They took 22 minutes to take the lead and it was Clint Dempsey who broke the deadlock. 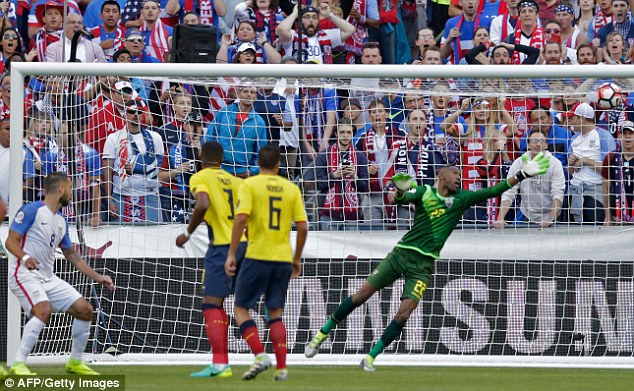 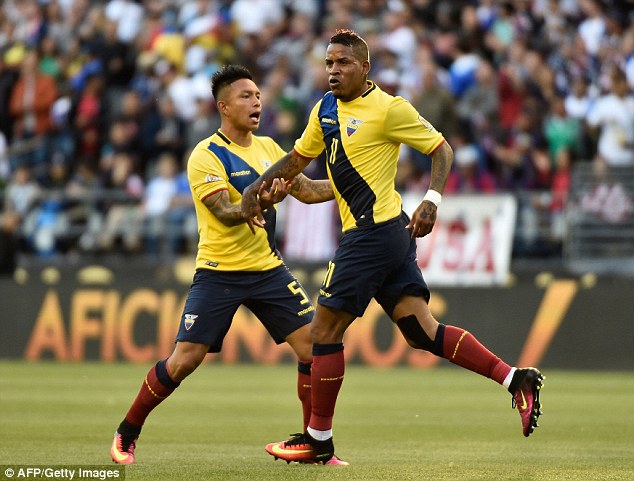 Sent off: A Valencia

The former Fulham and Tottenham star executed the perfect header, which sailed into the top scorer, after Bobby Wood cut the ball back to Jermaine Jones, who whipped it into the box.

Wood had been forced wide of goal and it seemed the move would break down, but he made the right decision by feeding Jones, who put the ball on a plate for Dempsey.

The 33-year-old plays for the Seattle Sounders and at the CenturyLink field, his club side’s home, he was hailed by a crowd of nearly 50,000.

Dempsey has been the USA’s best player at the Copa America, having played a part in six of the seven goals the team has scored this summer, racking up three strikes of his own and three assists.

He was the man who laid on the second for Gyasi Zardes in the 65th minute, after the forward won a header in the box and Dempsey fired it back to him at the far post.

Plenty had happened between the first and second goals though, with both teams having a man dismissed early in the secnd half. 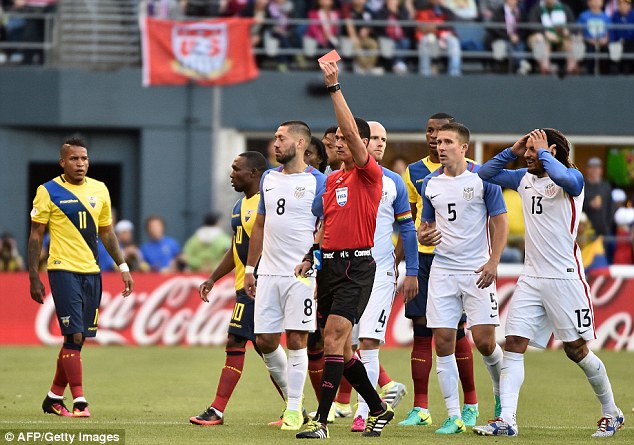 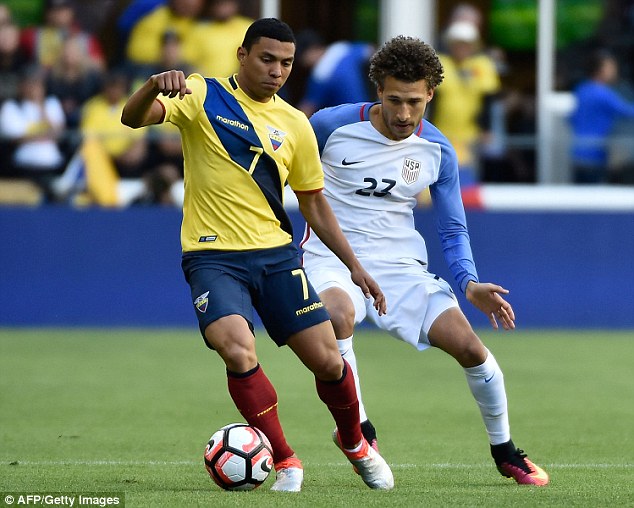 Manchester United’s Antonio Valencia was shown his second yellow card after swiping out at Alejando Bedoya, causing a melee in which Jones was also given his marching orders after pushing his hand into Michael Arroyo’s face.

Bedoya had missed a good chance after Dempsey teed him up, and he was playing like he had a bee in his bonnet, picking up a booking for a foolish tackle that will rule him out of the semi-final clash against either Argentina or Venezuela.

Wood and Jones will also be suspended so Klinsmann will have to call on reserves he has barely used, probably against the might of Lionel Messi, Sergio Aguero and Co.

The US had to fight for their place though, with Ecuador netting through a low Arroyo drive with 15 minutes left to go. 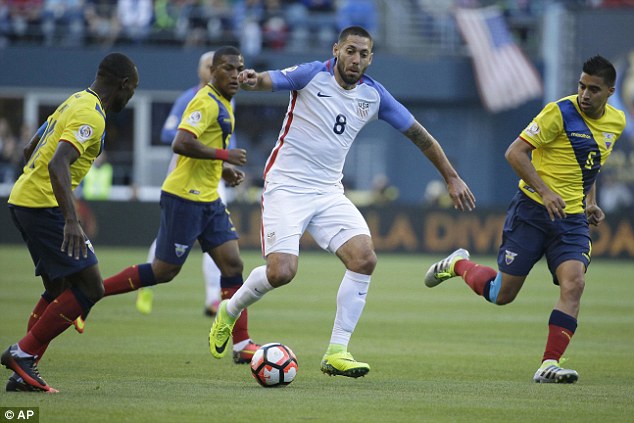 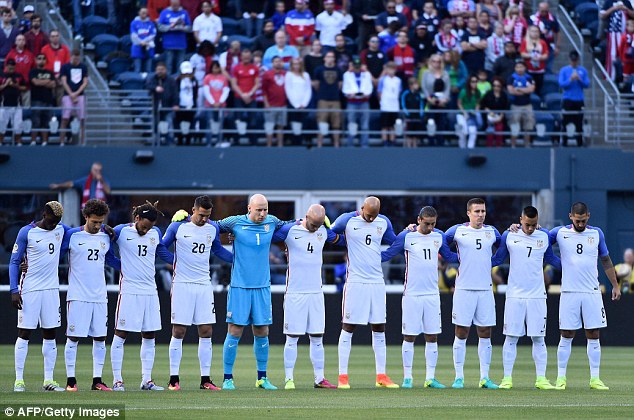 Enner Valencia should have equalised after Jefferson Montero picked him out with a cross, but his header inched over the crossbar as the minutes ticked away.

Brad Guzan, who has enjoyed a superb tournament, made a fine save from his own defender John Brooks who deflected an effort towards his own goal, but it was the last threat his side had to face.

Klinsmann said the semi-finals were the target before the tournament started and now his team have arrived there. Sometimes it’s seemed more like luck than judgement. They will need both if they are to reach the final. 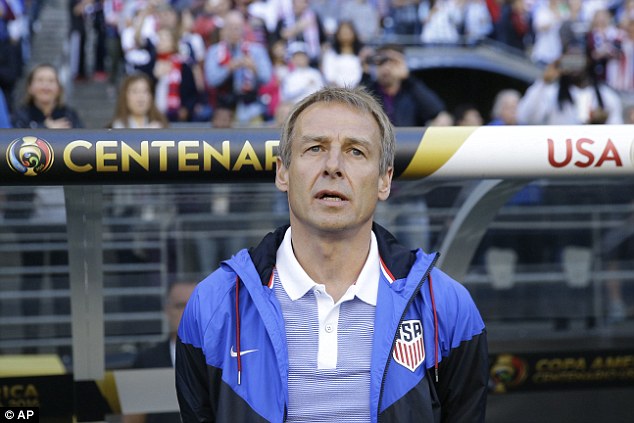