USA Basketball says no one will wear Brittney Griner’s no. 15 at the upcoming FIBA Women’s World Cup

USA Basketball says no one will wear Brittney Griner’s No. 15 at the upcoming World Cup… as the star center still sits in a Russian jail after her arrest in February

By Reuters and Afp and Jake Fenner For Dailymail.Com

USA Basketball said none of its players at the Women’s World Cup would wear the No. 15 when the tournament begins on Thursday, in honor of Brittney Griner, who was sentenced to nine years in prison in Russia on drug charges last month.

Griner, who wore the No. 15 in international competition, helped the United States collect two of their 10 gold medals in the quadrennial tournament, which takes place in Sydney this year running through October 1st.

‘USA Basketball continues to keep BG in our thoughts as we take the court in Sydney. In her honor, no U.S. player will wear BG´s No. 15 in this competition. #WeAreBG,’ the sport’s national governing body said on Twitter.

No one on Team USA wears No. 15 other than two-time Olympic Gold Medalist Brittney Griner.

USA Basketball will honor BG as they take the court in Sydney at the World Cup. No. 15 will stay reserved until BG is back home. #WeAreBG pic.twitter.com/S7ud0jX3Mi

U.S. President Joe Biden met with the WNBA star’s wife, Cherelle Griner, last week and has called the judgment against Griner ‘unacceptable.’ The United States said in July it put forth a ‘substantial offer’ for the release of Griner and former U.S. Marine Paul Whelan.

Coach Cheryl Reeve admitted Wednesday the fate of ‘gentle soul’ Griner is weighing heavily on the USA team at the tournament.

Griner, a standout when they won gold at the Tokyo Olympics last year, would normally be with the squad as they attempt to claim a fourth straight title and 11th overall, starting Thursday against Belgium.

Reeve said Griner would be ‘top of mind’ throughout the 10-day tournament, and revealed players had been in touch with her to send messages of support.

‘The mindset is just trying to stay strong for her and doing what we can,’ Reeve said, describing Griner as ‘a gentle soul, just full of love’. 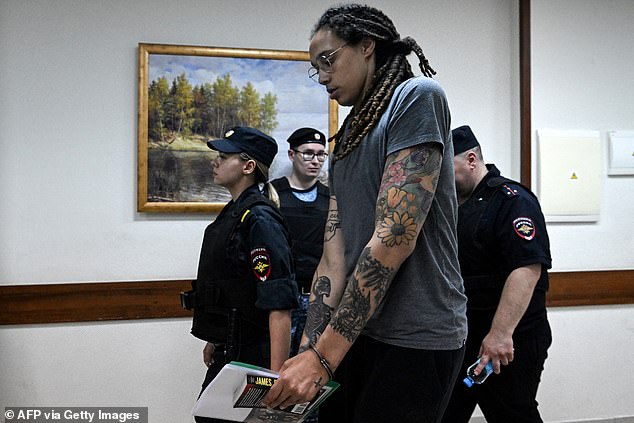 She added that players had been able to communicate with their teammate via email, sending ‘messages of love and support and strength’.

‘It’s on their minds every day. It’s heavy, it is really, really heavy especially as we participate in this USA basketball competition,’ she added.

‘She’s such a big part of many of our lives, so it’s challenging.’

Since being selected first overall out of Baylor University in the 2013 WNBA draft, Griner won the 2014 WNBA finals, has been named a WNBA all-star eight times, has been the league’s scoring leader twice, and has been named to multiple lists highlighting the best in women’s basketball.

In addition, she’s won four Gold medals with Team USA – including two at the Olympics and two at the World Cup. 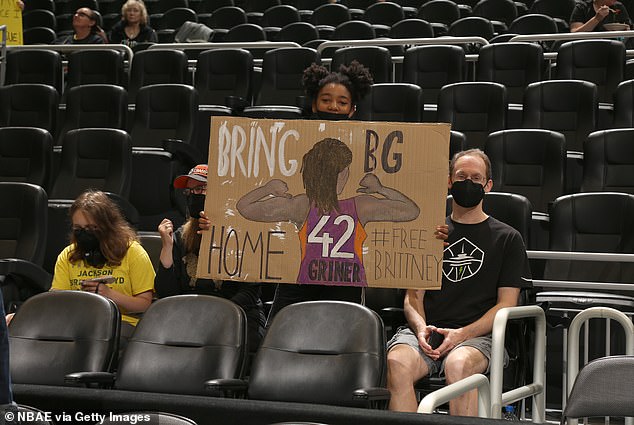 Griner’s well-being is a concern among USA players, with many advocating for her release