The US Air Force’s Thunderbirds put on a special show above every hospital in the Las Vegas Valley as a way of thanking first responders, health care professionals and other essential workers during the coronavirus pandemic.

The elite demonstration squadron, which is based out of Nevada’s Nellis Air Force Base, began their 25-minute aerial honor at 2.30pm Saturday.

The eight F-16 Fighting Falcons’s flight path took them over Nevada’s Centennial Hills, Summerlin and Spring Valley areas, along the Las Vegas Strip and to Henderson.

The US Air Force’s Thunderbirds put on a special flyover, across the Las Vegas Valley, Saturday to honor essential workers during the coronavirus pandemic 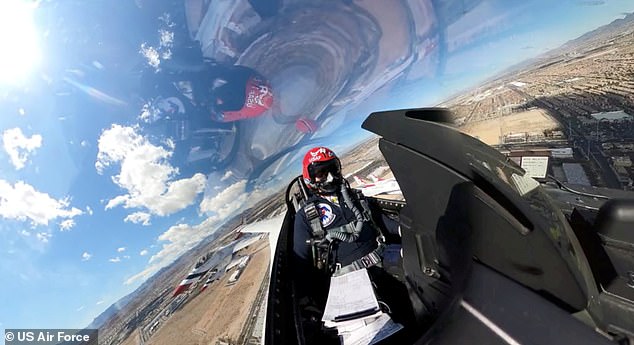 Eight F-16 fighter jets participated in the flyover. The demonstration team’s commander said it was rare for the entire squadron to perform together

Thunderbirds commander and leader Lt. Col. John Caldwell has said Friday that six of the fighter jets would be performing maneuvers as close to three feet apart, while traveling up to 450mph, at altitudes of between 500 to 1,000 feet.

He also noted that it was rare for the entire squadron to participate in the flyover, according to the Las Vegas Review-Journal.

‘We’ve been amazed at just the tenacity, the dedication, the professionalism of some of our medical professionals,’ Lt. Col. Caldwell said.

‘What better way to show a supportive solidarity of our thank you, of our gratitude than dedicating these flyovers to our medical community?’

Lt. Col. Caldwell also said the flyover was meant to represent the support of the Air Force’s 685,000 members for essential personnel in Las Vegas and around the US. 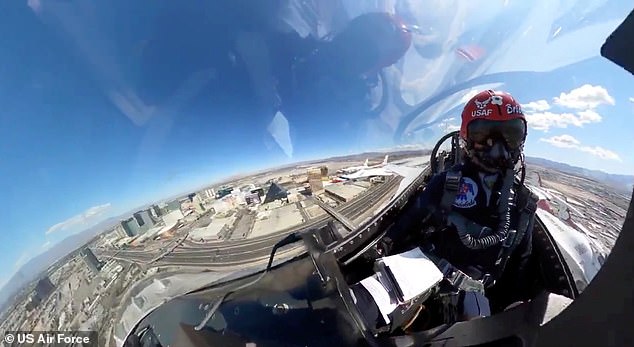 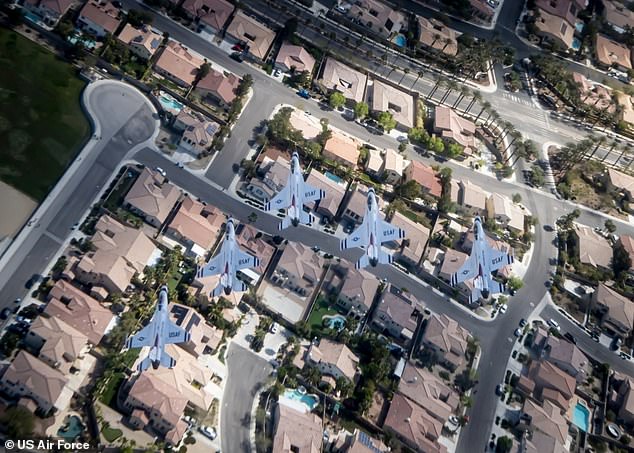 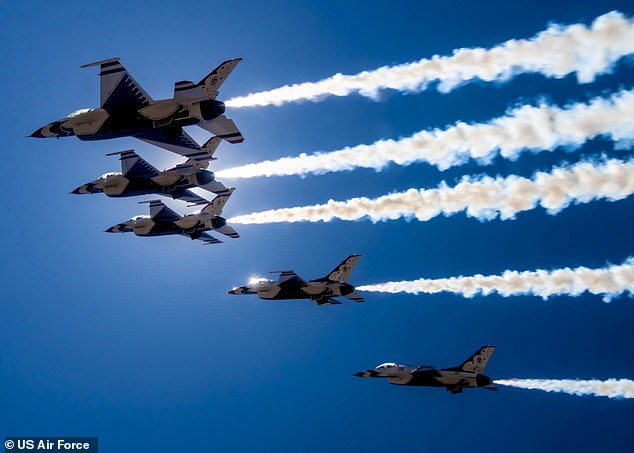 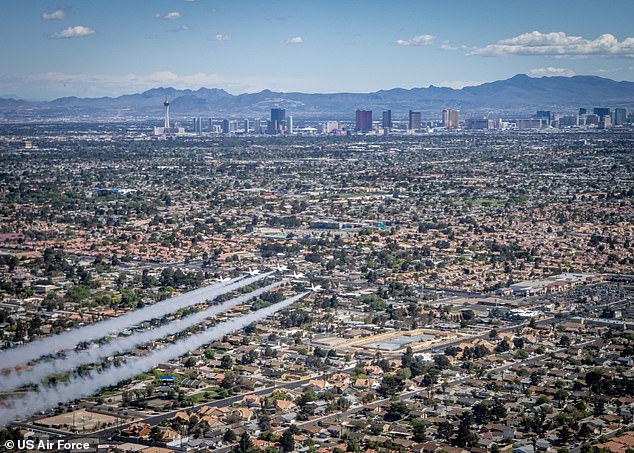 ‘It is an honor to fly for the Americans at the forefront of our nation’s fight against the coronavirus,’ Lt. Col. Caldwell said in a press release, calling them ‘true heroes.’

Residents of the Las Vegas Valley were encouraged to watch the flyover from the safety of home-quarantine and were reminded to follow social distancing guidelines during the performance.

‘We want Las Vegas residents to look up from their homes and enjoy the display of American resolve and pride while keeping front line coronavirus responders in their hearts during this unprecedented time in our nation,’ Lt. Col. Caldwell said.

Despite the Thunderbirds telling people not to travel to watch the flyover or gather to see it, Las Vegas Valley residents did so anyway.

Las Vegas’ Town Square and Las Vegas Golf Center parking lots were reported to be nearly full before the jets left the Air Force base.

One man, Marine Corps veteran Chris Slajar, 47, had parked his truck horizontally across multiple parking lot spots outside the golf center as a method of enforcing social distancing.

He told the Las Vegas Review-Journal that he and his wife, Veronica, 49, were ‘getting very stir crazy; this lets us out to see eight super-cool fighter jets.’

Other viewers sat on their cars on the Las Vegas Strip.