Using moisturisers, make-up and shaving cream could kill your dog

But scientists have today suggested women may be unknowingly harming dogs by exposing them to toxic chemicals.

Common cosmetics could be triggering chronic illnesses that can ultimately lead to the death of the adorable pets, new research shows.

High levels of gender-bending chemicals used to preserve moisturiser, make-up and shaving cream have been found in the urine of Britain’s most popular pets.

Researchers say it could explain why dogs that stay indoors have increased rates of diseases such as diabetes, kidney failure – which can kill – and hypothyroidism compared with those that stay outside.

Some scientists suggested substances in the home could be the cause – and now the theory has been investigated for the first time.

They’re known for being man’s best friend. But scientists have today suggested women may be unknowingly harming dogs by exposing them to toxic chemicals

An analysis of 58 varieties of dog and cat food – as well as 60 urine samples from animals – identified an abundance of methyl paraben and its metabolite 4-HB (4-hydroxybenzoic acid). The chemical is the most common used in cosmetics.

Most of the consumption by cats was through their diet – whereas the dogs exposure was about seven times more.

Coming from other sources – not just pet food

This showed it must have come from other sources’ too – such as household products, according to New York State Department of Health researchers.

In the last 20 years concerns have been raised about the risk to human health posed by these parabens – which have been linked to breast cancer in particular.

This is because they possess oestrogen-mimicking effects. Oestrogen is known to play a central role in the development, growth and progression of the disease.

The study, published in the journal Environmental Science & Technology, said parabens – also found in foods and drugs – are preservatives commonly found in cosmetic and pharmaceutical products.

Their use in human food products and dog and cat food is regulated by the US Food & Drug Administration as substances as they have been shown to be endocrine-disrupting compounds (EDCs).

This can have harmful effects on developmental, reproductive and neurological systems.

Previous studies have examined the presence of other EDCs – such as heavy metals and bisphenol A – in pet food. But very little is known about parabens.

Dr Kurunthachalam Kannan and colleagues analysed the exposure of dogs and cats to parabens in commercially available pet food and levels in their urine. 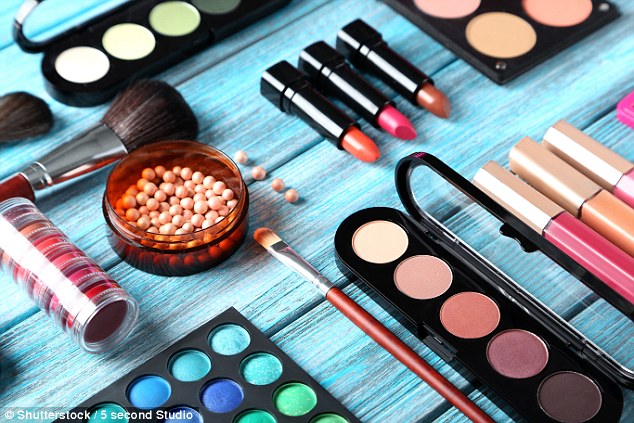 High levels of gender-bending chemicals used to preserve moisturiser, make-up and shaving cream have been found in the urine of Britain’s most popular pets

After the urine analysis the group calculated the cumulative exposure intake for the dogs and cats.

By comparing the calculations the team concluded dogs are exposed to other sources of parabens – besides food. Cats’ exposure is mainly from their diet.

The researchers believe it’s the first time the occurrence of these substances has been reported in pet food and urine.

WHAT ARE GENDER-BENDING CHEMICALS?

BPS was designed as a replacement for BPA after mounting concerns about the plastic compound’s effect on human health.

But, scientists now believe that BPS is also a hormone disruptor.

WHAT ARE THESE CHEMICALS?

Bisphenol A (BPA) in polycarbonate plastic is used for hard reusable bottles and food containers.

WHAT DO THEY DO?

The invisible chemicals cause neurological and behavioral disorders including autism and ADHD.

Their hormone effects may cause cancer, diabetes, male infertility and endometriosis.

What did the researchers say?

Dr Kannan, an environmental scientist at New York State Department of Health, said: ‘Many households can claim at least one four-legged friend as part of the family.

‘But pets that primarily stay indoors can have increased rates of diseases, such as diabetes, kidney diseases and hypothyroidism compared with those that stay exclusively outside.

‘The exposure of pets, such as dogs and cats, to a wide range of chemicals present in the indoor environment and the concomitant increase in non-infectious diseases in these companion animals are a concern.

‘Parabens, especially methyl paraben (MeP), and their metabolites were found in all pet food and urine samples.’

What did the researchers find in the urine of dogs and cats?

The average concentrations of parabens in dog and cat food were 1,350 and 1,550 nanograms per gram respectively.

Dr Kannan said: ‘In addition to diet, other sources of paraben exposures were found for dogs, whereas, for cats, the majority of exposures was identified as related to diet.’

They are also found in numerous brands of underarm deodorant.

They are present in processed meats such as sausages, pies and pastries along with other savoury snacks

Parabens are a chemical compound of para-hydroxybenzoic acid. They are most widely used in cosmetics to extend their shelf-life by protecting them from microbial growth.

They are also used in drugs and as food additives. They occur naturally in some foods such as blueberries.