USMNT coach Gregg Berhalter hails Christian Pulisic as the ‘ultimate competitor’ ahead of Japan friendly, and said he’s handling Chelsea situation ‘in a great way’ after turbulent start to season

Gregg Berhalter has called USMNT talisman Christian Pulisic the ‘ultimate competitor’ as the team prepares to face Japan Friday in the first of its last two World Cup tune-ups.

Pulisic, who has won the Champions League and World Club Cup with Chelsea, has already scored 21 goals for the national team and could be in store for a great tournament in Qatar if his coach is to believed.

‘I think Christian is an ultimate competitor,’ Berhalter told reporters virtually on Thursday. ‘He’s a guy that, he just turned 24 on Sunday, and it seems like he’s been in football for the last decade.

‘He’s seen it all, done it all, and I think the World Cup will be a great moment for him as a player.’

Pulisic endured a difficult summer with Chelsea, as Raheem Sterling was signed from Manchester City to occupy his left-wing spot, leading the American to be linked with a move away.

However, Pulisic remained at the club and has started just one of the club’s six EPL matches this season.

The winger also had a sometimes frosty relationship with former manager Thomas Tuchel.

In his forthcoming autobiography, Pulisic claims the German coach misled him about a place in the starting lineup for the 2020-21 Champions League semifinal second leg vs. Real Madrid, but Berhalter was full of praise for the player’s attitude on Thursday. 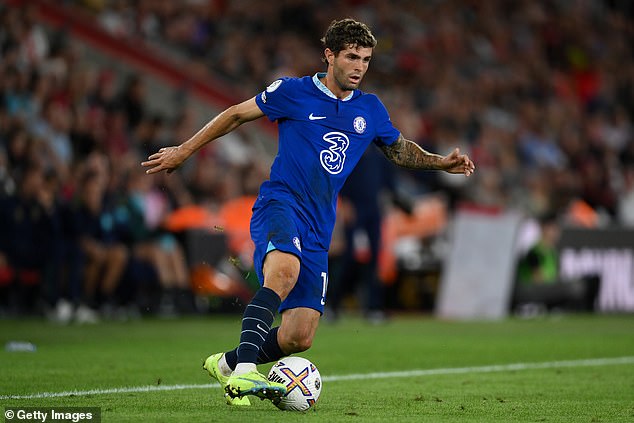 ‘What I’ve seen the most from him is his growth as a person, and that’s been gratifying over these three-and-a-half years.

‘He’s really matured, really has been able to handle adversity. And every player’s situation with their club is different, and it’s how they navigate through that that’s important.

‘And he’s navigating through it in a great way, and I’m excited to see what the future holds for him.’

Pulisic was linked with moves to Manchester United, Juventus and Newcastle over the summer after starting just 13 league games last season.

However, he could have a new lease on life at the club with the appointment of Graham Potter as the new manager earlier this month.

Berhalter also recognized how Potter’s arrival could be a positive for his No. 10.

‘I’m not happy a guy lost his job. But if this means more opportunity for Christian, then it’s positive because he’s a guy that’s proven that he can perform at that level,’ he told The Associated Press. ‘We’ll just have to wait and see.’

The USMNT will face Japan on Friday before playing Saudi Arabia on Tuesday.

Their World Cup begins on November 21 vs. Wales.