The USNS Comfort and the Javits Convention Center are still sitting mostly empty despite being set up in New York City to treat coronavirus patients while emergency rooms across the city overflow with patients.

The 1,000-bed Comfort and 2,500-bed Javits Center were set up by the federal government and military to alleviate the strain on New York’s hospitals at the height of the pandemic.

But immediately, hospital executives expressed frustration and outrage at the red tape that was stopping them from actually contributing to the crisis.

The first problem was that neither was willing to take COVID-19 patients. The Comfort also refused to take patients who had any of 49 other health conditions that were detailed in a list by the state department that is yet to become public.

Gov. Cuomo asked Trump to overrule FEMA and turn both into COVID-19 facilities, which he did. It reduced the USNS Comfort’s capacity from 1,000 to 500.

But there is still a mountain of as-yet unexplained red tape that is stopping people from being treated there.

There are currently only 60 patients at the Comfort and 225 in the Javits Center.

One doctor told The New York Post there was a 25-point checklist of requirements that patients had to meet before they could be transported. It is unclear whether the military or the state department of health mandated that checklist.

Photos released by the defense department show the Javits Center, where military doctors are treating coronavirus patients. It is still largely empty due to a mountain of red tape that is stopping people from getting the care they need. Only 225 people are being treated there 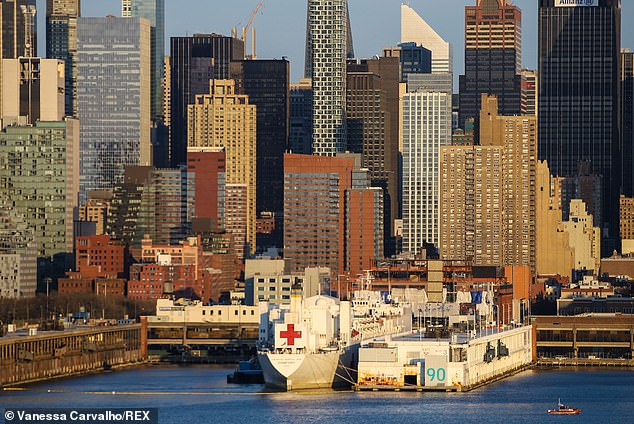 The USNS Comfort, which has the capacity for 500 coronavirus patients, only has 60

State officials say that it was the military that put the strict requirements in place, whereas defense officials say it was the state. They say the state issued guidance saying the patients had to have five days worth of medication before they could be transported to either facility because their pharmacies are so backed up.

They are now working to get their pharmacies up to scratch to handle the incoming load of patients and say dozens will be transported this week.

An additional hurdle is the lack of specialized staffing. The Comfort, for example, does not have the right staff to treat mentally ill people, children or pregnant women.

One state official told the Post that the Comfort was refusing to take any patient that needed a nurse for eight hours or longer, for reasons that are not clear.

Yet another complication is that it is logistically difficult to move patients who are on ventilators.

‘I think at the end of the day, no one wants to accept a patient that then we can’t care for and then we have to transfer back to a hospital and burden them again,’  Major General William Hall, the commander of Joint Task Force Civil Support, said, adding that more patients would be moved this week to both.

Doctors in overwhelmed hospitals are at their wits end with the situation. 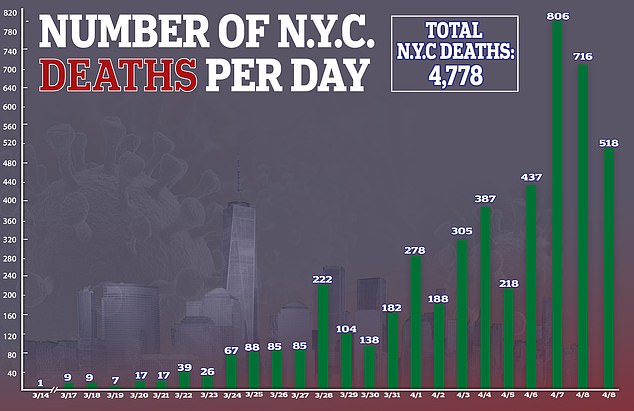 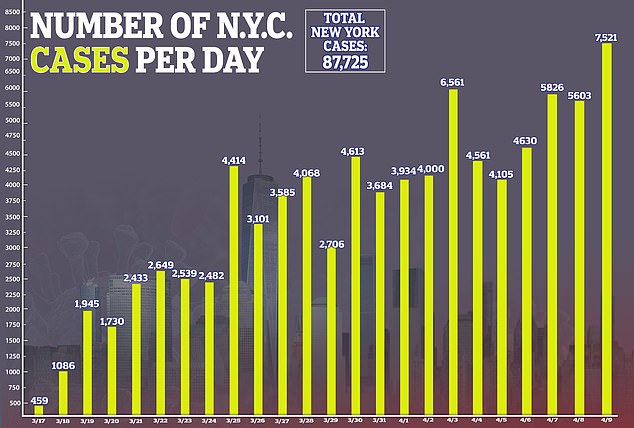 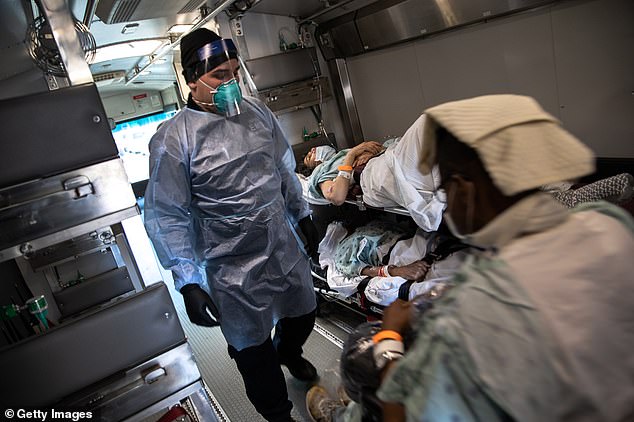 One doctor who works at a hospital in East Harlem told The Post: ‘It’s bulls**t.’

The worker said that his hospital recently asked Javits to take 95 patients but that they only accepted one. He did not say what their reasons were for rejecting the other 94.

Another hospital worker from the Jacobi Medical Center in the Bronx said  that it was a ‘big problem’ especially when his ER is ‘backed up 50 deep’.

Michel Downing, the CEO of Northwell Health, is among those who are frustrated.

He said it was ‘hogwash’ that the delay was the state’s fault and that the federal government is to blame for the bungled relief efforts.

‘They wanted no patients that needed to see a nurse more than once every eight hours.

‘They wanted all patients to be ambulatory. We had no patients like that. To say it was our list is hogwash,’ he said.

On Thursday, Vice President Mike Pence called the patient count on the Comfort so ‘modest’ that 75 military doctors had been deployed to emergency rooms to help relieve their strain. 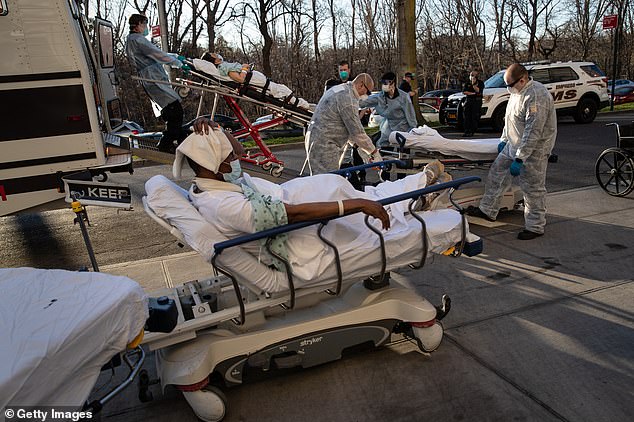 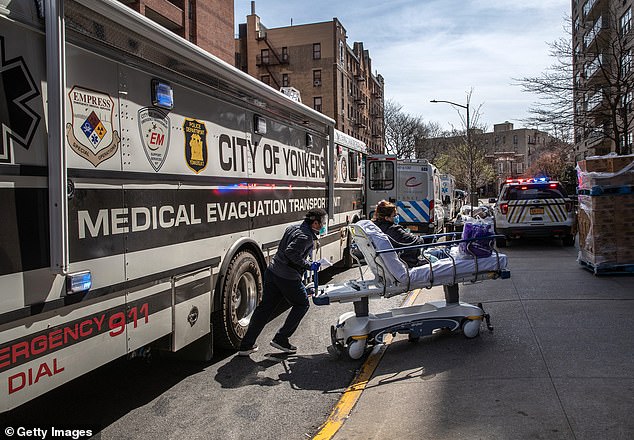 A worker wearing PPE pushes a COVID-19 patient from a specialized bus known as a Medical Evacuation Transport Unit (METU), which carried patients to the Montefiore Medical Center Moses Campus on Tuesday 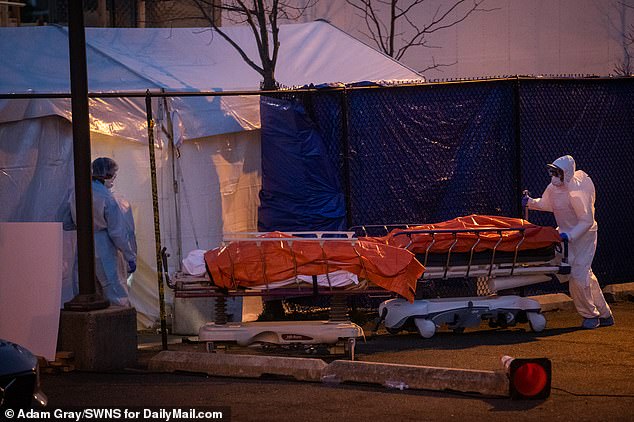 Devastating photos show coronavirus patients being stacked onto evacuation buses and body bags being wheeled out of morgues as New York City sees over 1,000 deaths over the last 36 hours from Tuesday morning to Wednesday night

The rate of hospitalization is dramatically slowing in New York, as is the number of patients entering ICU.

While the death toll continues to climb, it has left many hopeful that New York has hit its peak and is now turning a corner in its fight against the virus.

The city’s hospitals have been so overwhelmed by the crisis that they turned lobbies and conference rooms into wards to accommodate the wave of patients.

Doctors and nurses have worked round the clock, many of them falling sick themselves, because of their unrelenting exposure to the disease.