The USS Abraham Lincoln has arrived home after a 295-day deployment – the longest since the Cold War – allowing some sailors to meet their children for the first time.

The Lincoln left it’s former home port in Norfolk, Virginia, on April 1, 2019, and returned to its new home port in Coronado, California, following a 10-month deployment that took them around the world and covered 64,000 nautical miles.

The Lincoln was originally supposed to arrive in Coronado in October, but had its deployment extended three months due to escalating tension with Iran.

While at sea, the 3,000-person Carrier Strike Group it led participated in maritime security and combat missions with various US allies around the world. 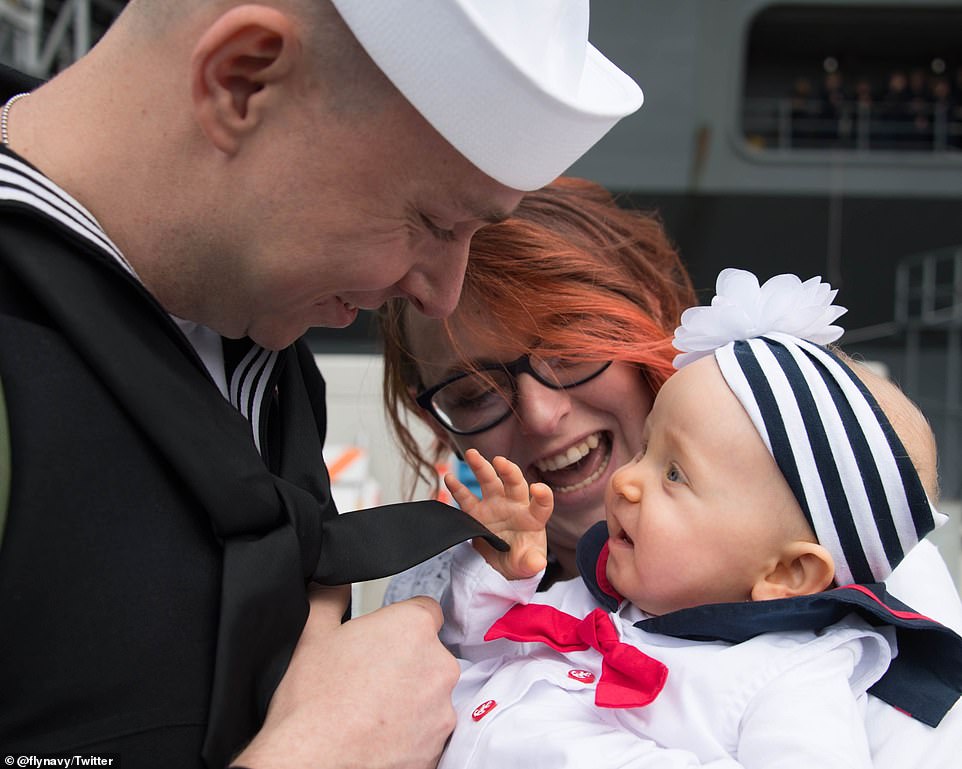 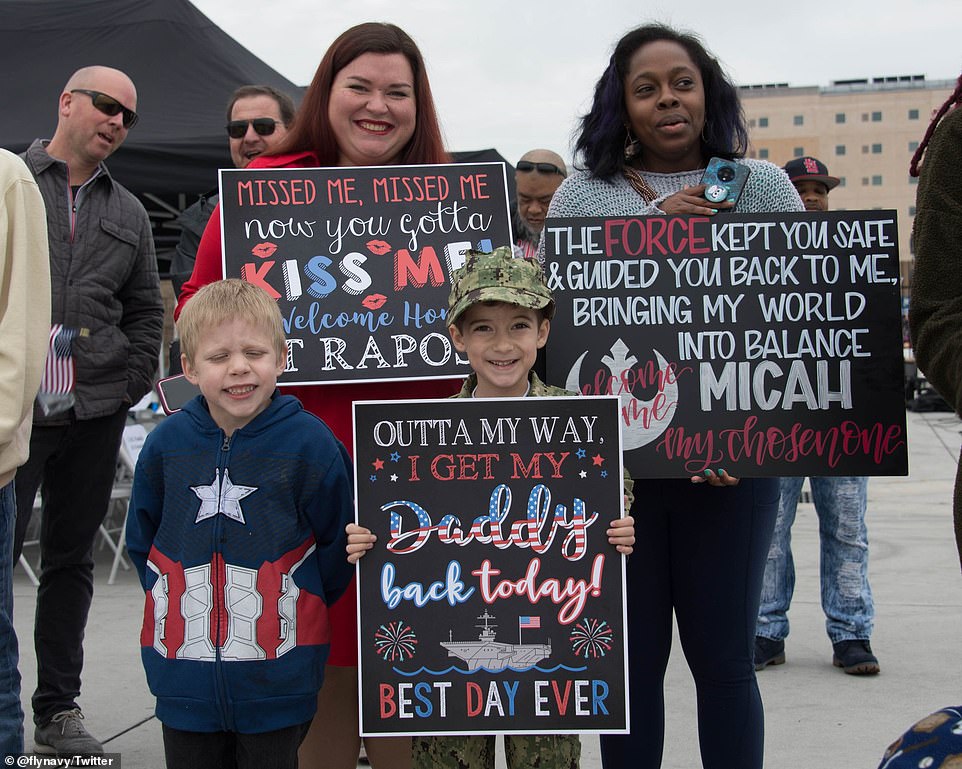 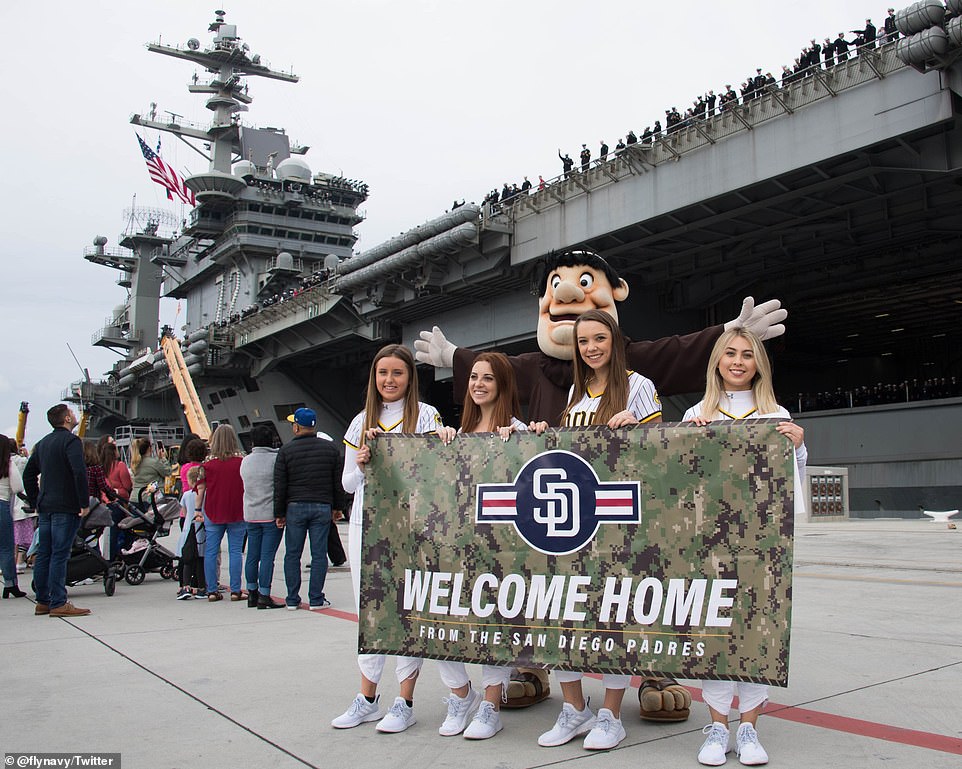 The USS Abraham Lincoln had previously been based out of Norfolk, Virginia, but made a pre-arranged port-swap in October 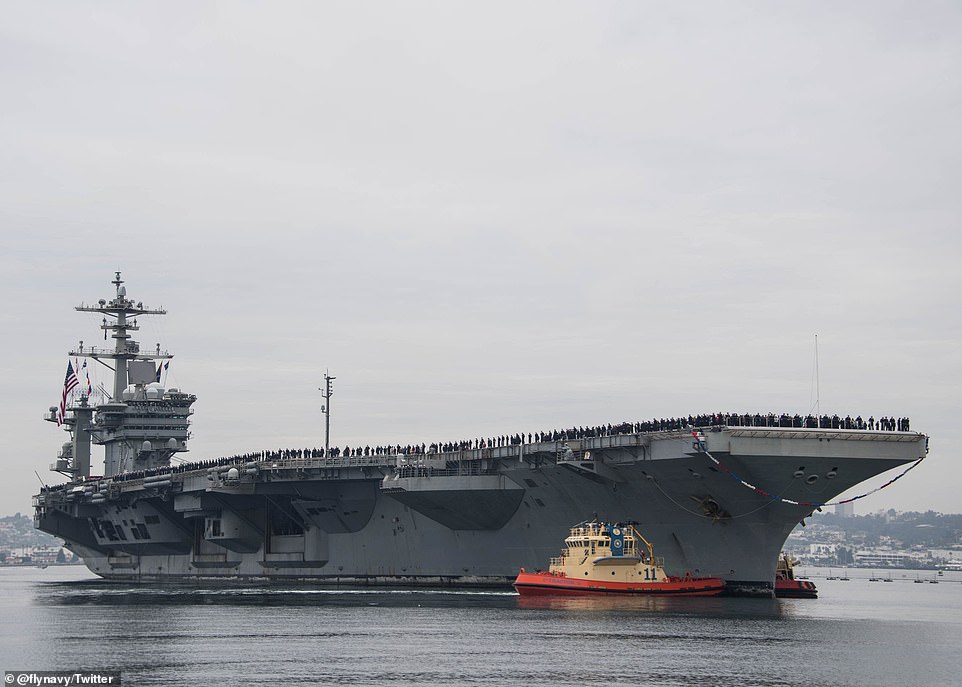 During the 10 months they were away, a number of sailors missed the births of their children – meaning that they got to hold their babies for the first time ever Monday morning.

P02 John Aportela, who was finally introduced to his six-month-old daughter in person, told 10 News that he was ‘blessed to be back and I thank God for bringing us back safe.’

Aviation Boatswain’s Mate First Class Brian Johnson told the San Diego Union-Tribune that he was ‘euphoric’ about meeting his six-month-old son, Cameron, for the first time.

‘I had to imagine what he looked like in real life,’ Johnson said, noting that all he has was photos of the child, ‘so I was just trying to figure out what he would actually look like. I didn’t know what he smelled like or how he felt, so it’s really nice to see that.”

While their spouses were away on deployment, many of the sailors and Marines’ wives and children packed up their homes in Norfolk and moved across country, because the Lincoln had been given a planned port swap. 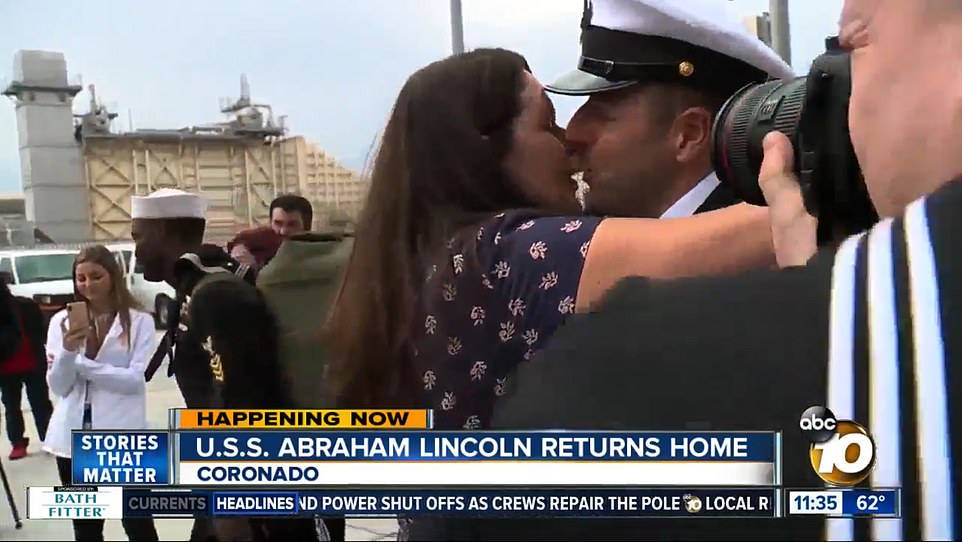 Some spouses said that they didn’t find out that the deployments were extended until they had already arrived in San Diego, expecting to great their loved ones in October 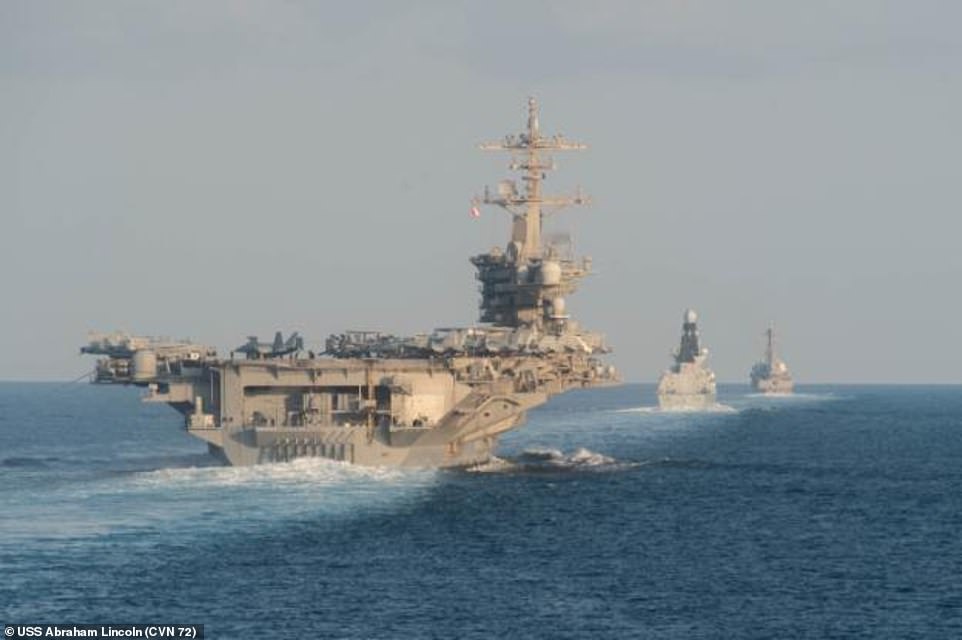 The USS Abraham Lincoln is seen in November 2019, traveling through the Strait of Hormuz

Brittney Lehman told the San Diego Union-Tribune that she was was waiting to introduce her husband – aviation ordanceman Austin – to their new five-month-old son, Colton.

She said that she had moved their family – which also included four-year-old son, Mason – from Virginia to California in October, only to find out that Austin’s deployment was being extended the day after she arrived in San Diego.

‘I left my family and all my friends in October because I thought he was going to be home,’ Brittney said. ‘I was in my new house and I got a phone call and he said, “Actually, I’m not coming home (yet).”‘

The strike group’s 10-month deployment is the longest carrier deployment in the post-Cold War era.

While the Lincoln was deployed, it assisted operations in the US 5th, 6th and 7th Fleet areas, working allies including France, Bahrain, Malaysia, Singapore, Saudi Arabia and Oman.

During the deployment, the Lincoln globe-trotted to ports in countries such as Singapore, Japan, Israel, Thailand, Australia and the Maldives, according to 10 News.

The Lincoln also operated out of the North Arabian Sea and the Gulf of Oman, supporting combat operations in Iraq, Afghanistan and Syria for 222 days.

‘Our mission there was to be a deterrent force. We were the response option,’ Carrier Strike Group 12 commander Rear Adm. Mike Boyle told USNI.

‘I truly believe, and it’s not a talking point – is our presence in the Middle East prevented us from going to war with Iran. There’s no doubt in my mind.’

Boyle said that the strike group supported troops on the ground in Afghanistan and Marines as they withdrew from Syria and added that ‘if we can prevent one soldier, one coalition soldier, from getting killed, we’d stay out there forever.’

He admitted that the deployment was ‘probably one of the more challenging’ that he’s had ‘not because it was long, but because the end date was uncertain.’

‘If you can count down, you can pretty much do anything. But when you don’t know when to start the count, it’s really, really challenging,’ he said.

While traveling from Norfolk to the North Arabian Sea and other parts of the world, the Lincoln navigated through multiple straits, including the Strait of Gibraltar, the Suez Canal, the Bab-el Mandeb, the Strait of Hormuz, the Strait of Malacca and the Surigao Strait, Fox 5 San Diego reported.