Navy Vice Admiral William Merz, commander of the US 7th Fleet, has answered questions from the crew and embarked staff of the aircraft carrier USS Theodore Roosevelt (CVN 71) during a visit to the ship on Tuesday when the crew were also tested for high temperatures.

Merz arrived in Guam to asses and support the ongoing COVID-19 recovery efforts and took questions for 90 minutes in a bunker after Captain Brett Crozier was relieved from his duties by Acting Secretary Thomas Modly.

As of Tuesday, 230 crew members had tested positive for coronavirus, according to Navy officials. There are more than 5,000 sailors on board.

Crozier was fired because a letter he wrote criticizing the Navy’s response to an outbreak on the ship was leaked.

Modly flouted social distancing rules and flew 8,000 miles to the ship just to berate the captain via loud speaker, labeling him ‘stupid’ for penning a note that could get out to the public. Modly ultimately resigned after scrutiny of how he put lives at risk by flying there, among other questionable actions. 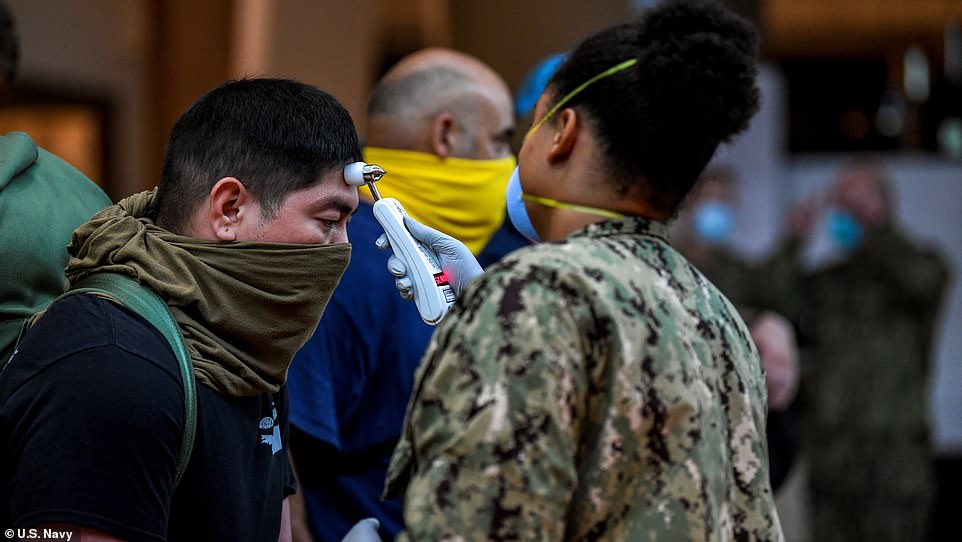 A crew member gets their temperature checked. Sailors remain in quarantine in their assigned lodging for at least 14 days, in accordance with DoD directive and the Governor’s executive order 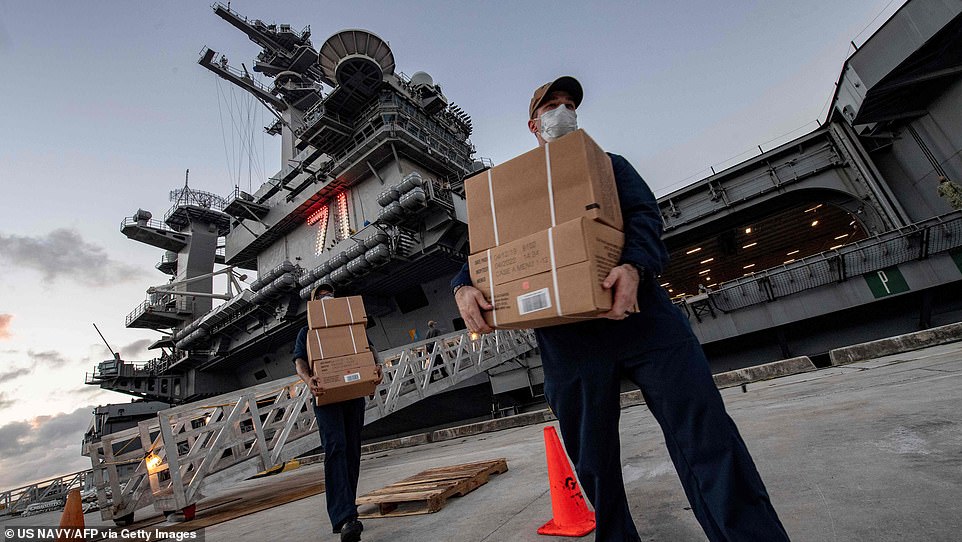 After fired captain Crozier had begged in the letter for permission to stop sailing, Theodore Roosevelt was docked in Guam Tuesday for a scheduled port visit to resupply and to allow crew to rest during their deployment to the Indo-Pacific.

Sailors assigned to the aircraft carrier USS Theodore Roosevelt (CVN 71) who have tested negative for COVID-19 and are asymptomatic are at local hotels in an effort to implement social distancing and stop the spread of COVID-19.

On Tuesday, Seabees assigned to Naval Mobile Construction Battalion (NMCB) 1 and NMCB-5 coordinated transportation of sailors from Naval Base Guam to government of Guam and military-approved commercial lodging.

Sailors remain in quarantine in their assigned lodging for at least 14 days, in accordance with DoD directive and the Governor’s executive order.

Acting Undersecretary of the Army, James McPherson, has been tapped by Pentagon officials to succeed Modly until permanent replacement found.

Modly’s resignation came amid mounting criticism of his handling of the coronavirus outbreak on the craft carriers, including criticism from several Democratic lawmakers such as Speaker Nancy Pelosi who said Modly should resign or be removed from office.

Washington Democratic Congressman Adam Smith, the chairman of the House Armed Services Committee, which has jurisdiction over the Navy, agreed. 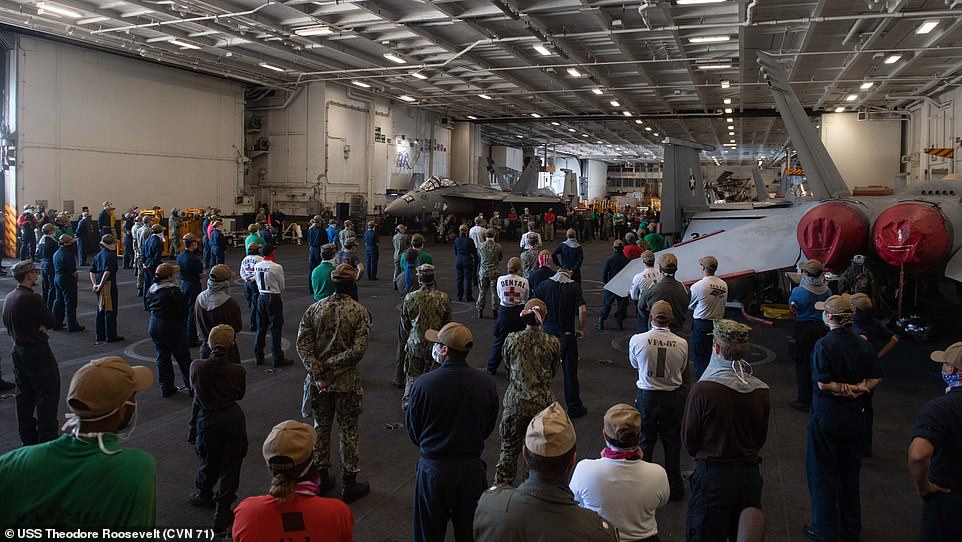 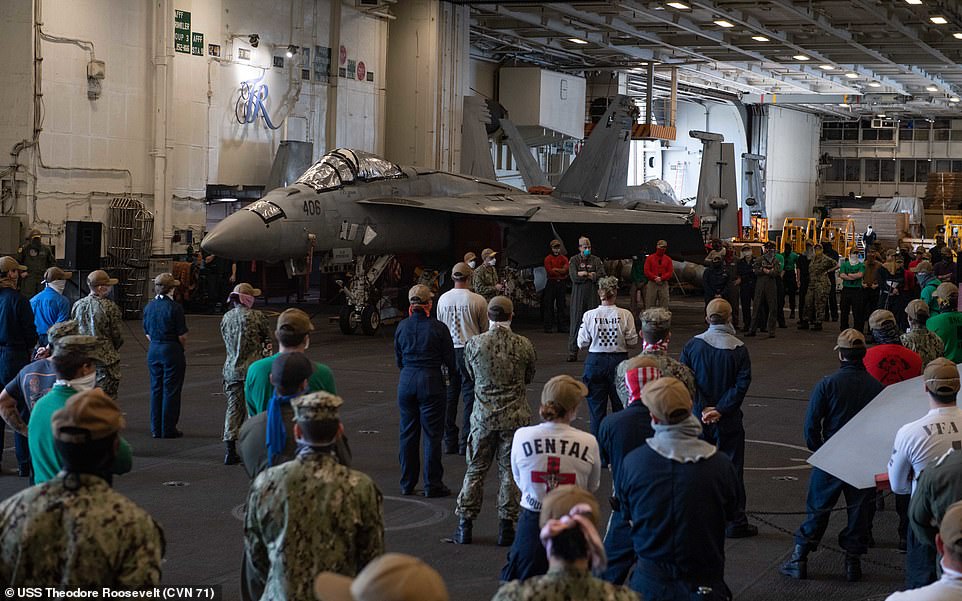 Merz answered questions during a visit to the ship on Tuesday. He is expected to stay there for a few days 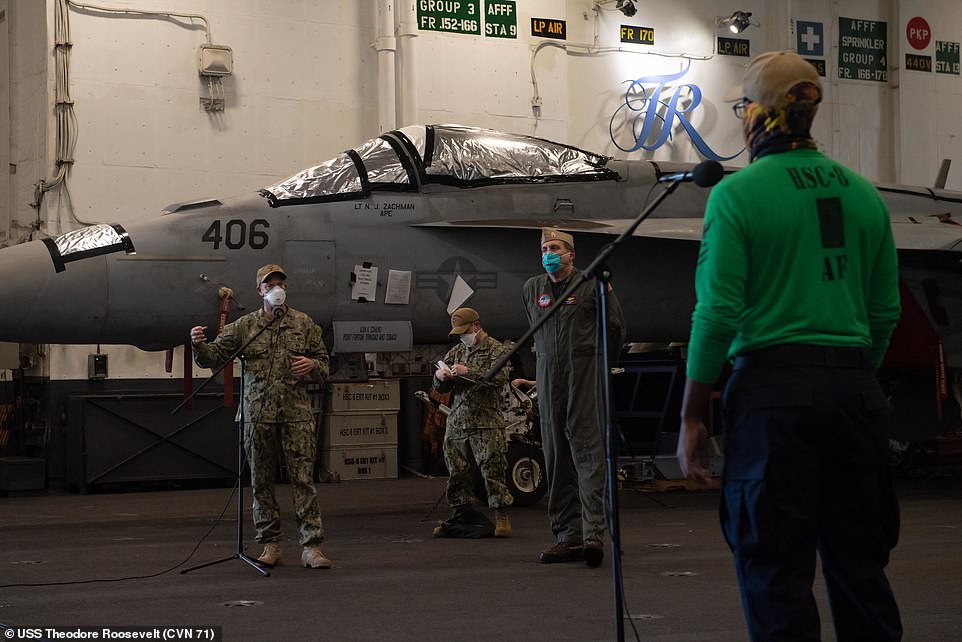 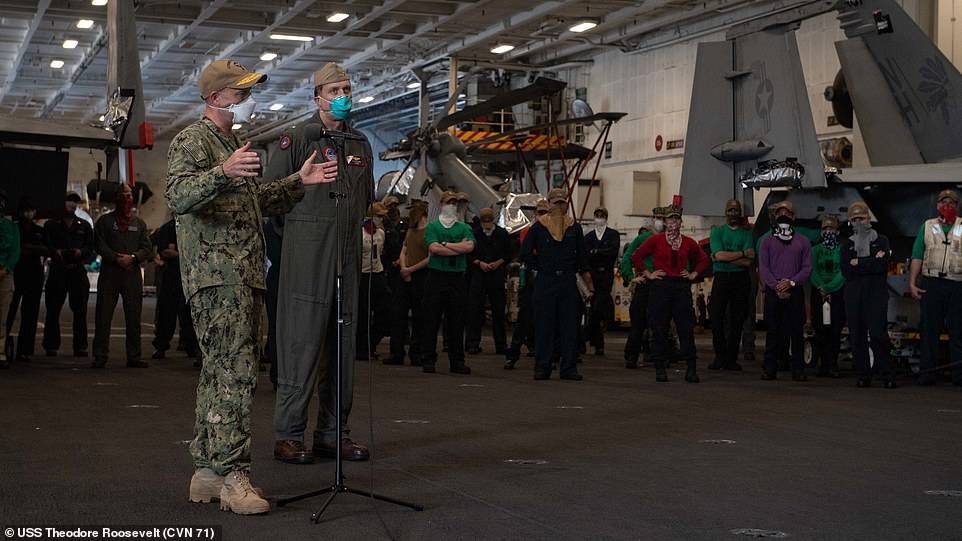 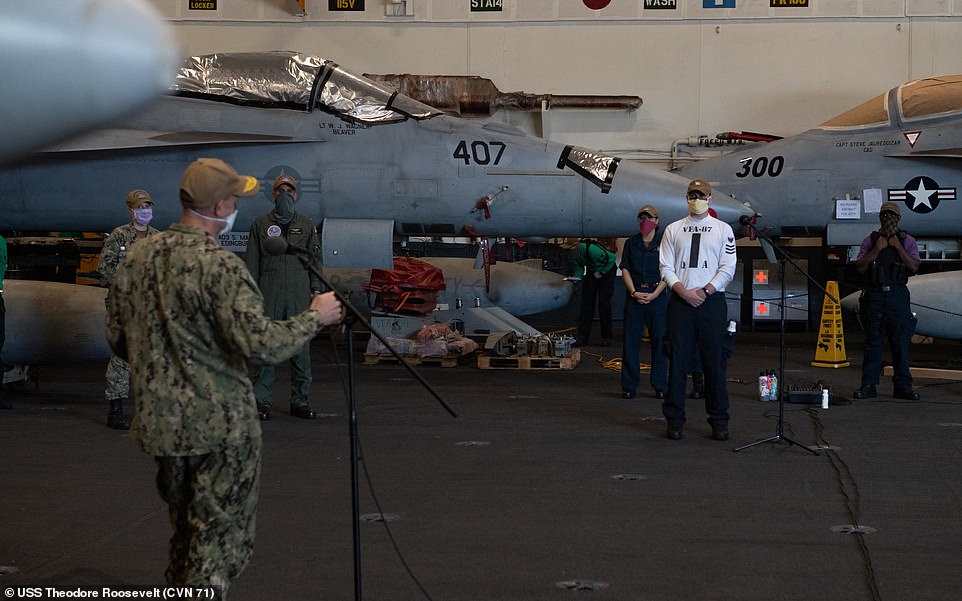 Several lawmakers were furious when Modly relieved Captain Brett Crozier of his command of the USS Theodore Roosevelt after a letter the captain wrote berating the Navy for its handling of a coronavirus outbreak on the ship went public.

In a scathing memo to Navy officials, Crozier pleaded to be able to take the Roosevelt to dock to try and contain the growing outbreak of coronavirus on the ship.

‘We are not at war. Sailors do not need to die,’ Crozier wrote in the four-page missive.

In early March, the USS Theodore Roosevelt made a stop in Vietnam. As it headed back out to sea, crew members began falling ill to the coronavirus with the highly contagious disease spreading rapidly throughout the ship.

The numbers rose from from three initially to more than 150 sailors affected.

As of Tuesday, 230 crew members of the Roosevelt had tested positive for the coronavirus, according to Navy officials. There are more than 5,000 sailors on board.

In his memo, Crozier complained about the limitations of the coronavirus test, saying seven who tested negative displayed symptoms of infection one to three days later.

He also pointed out the ship’s close quarters made it unable to comply with the recommended social distancing guidelines.

He wrote that bunk space, shared meals and bathroom spaces are ‘most conducive’ to spreading the disease. 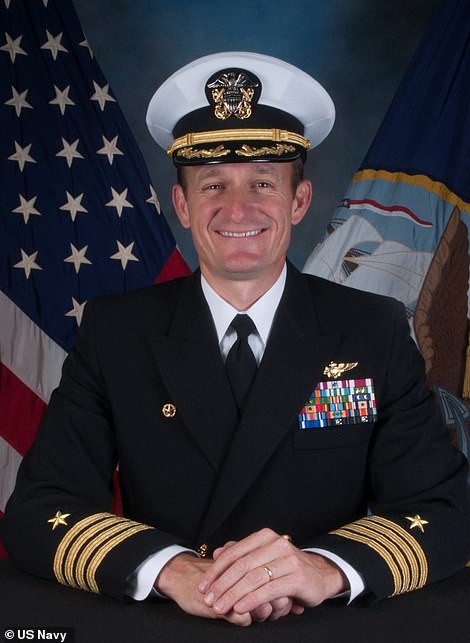 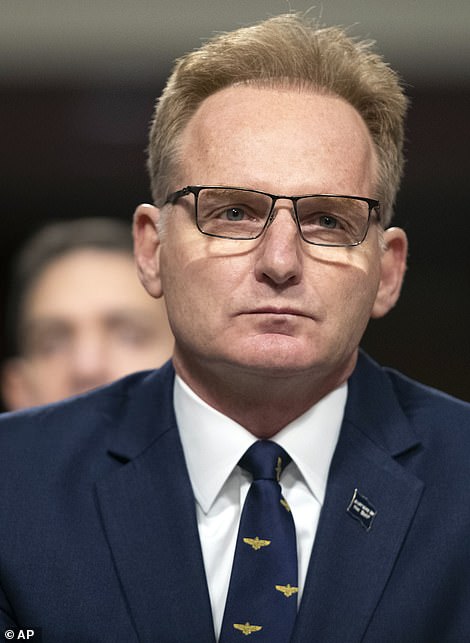 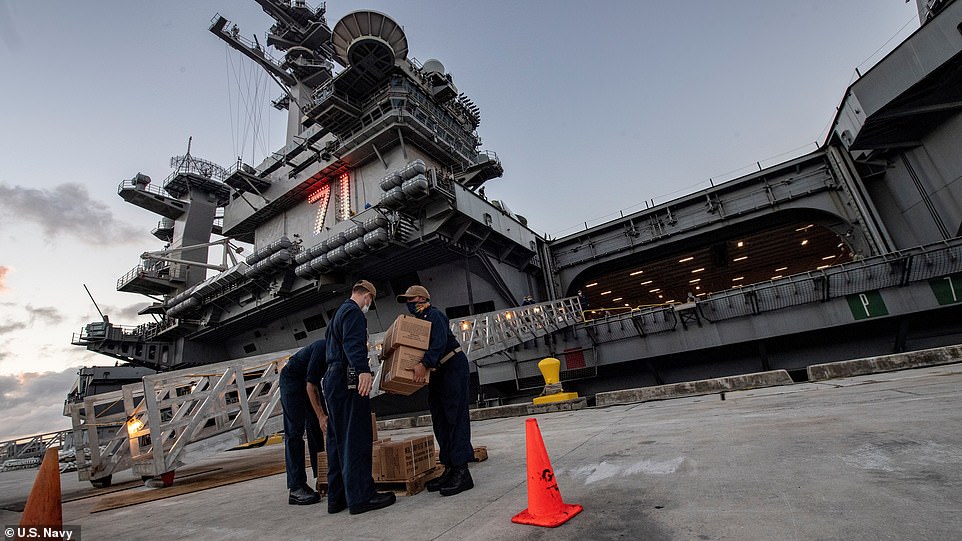 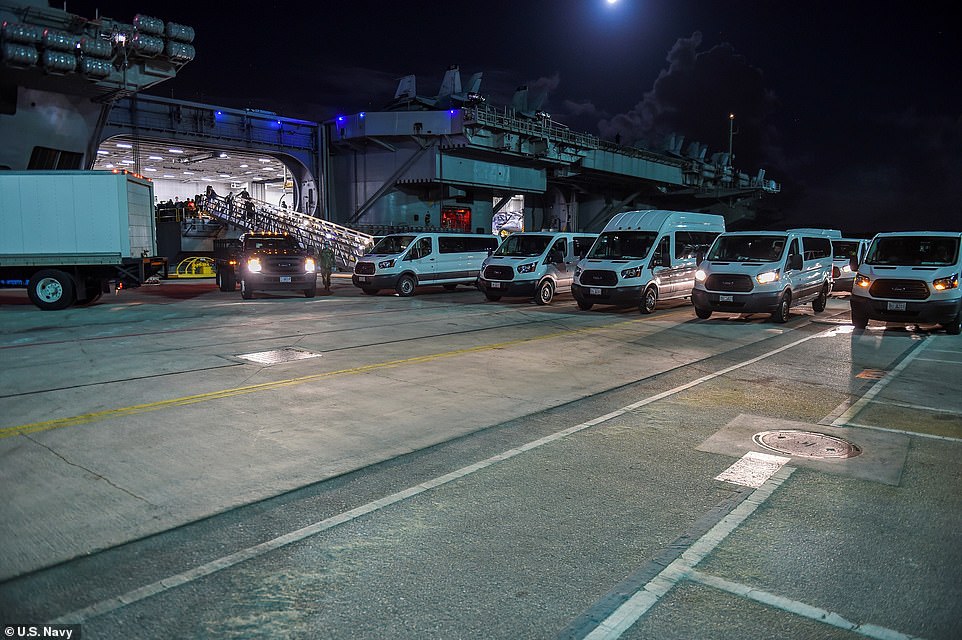 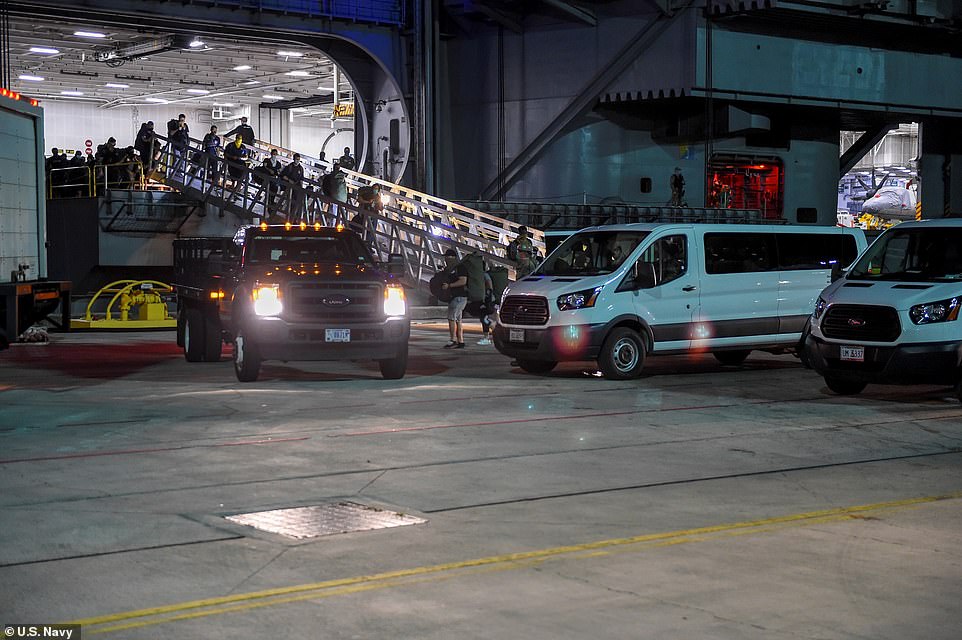 ‘With the exceptions of a handful of senior officer staterooms, none of the berthing onboard a warship is appropriate for quarantine or isolation,’ he noted.

After the memo went viral, Crozier was relieved of command.

In a 15-minute speech, blasted over the ship’s PA system, Modly went on a tirade against Crozier, calling him ‘naive’ and ‘stupid’ for writing something that ended up being leaked to the media.

Modly defended his decision, saying he had his chief of staff reach out to Crozier directly after he learned of the outbreak on the ship.

‘That message and all the contents of that message was perfectly fine for him to send to people in his chain of command in a confidential way so they could get acting on it. He, in fact, could have given it to me, either my chief of staff, or to me, as I asked him to do when I first reached out to him on the ship when we first found out that there were COVID cases here,’ he told the Roosevelt sailors in his speech

Trump said Crozier shouldn’t have sent the memo. He added, however, that the captain had a great career prior to the incident and shouldn’t have that destroyed for ‘having a bad day.’

‘He shouldn’t be writing letters like that. But it happens. Sometimes I’ll write a letter that I’ll say I wish I didn’t send it. Not too often but it happens,’ Trump said.

Many sailors on the Roosevelt praised Crozier for his actions and for being a leader when the sailors needed him.

‘He had legitimate concerns about his sailors, asked for help in a respectful and honorable way, and then they relieved him of duty’ one Roosevelt sailor told The Wall Street Journal.

‘Seriously, that’s crazy. If anything the guy deserves a promotion. That’s the type of leadership they lack, but the type they need,’ another said.

The acting Navy secretary defended his decision in an interview with The Washington Post, where he explained he fired Crozier because he thought that was what President Trump would want.

‘I didn’t want to get into a decision where the president would feel that he had to intervene because the Navy couldn’t be decisive,’ Modly said: ‘If I were president, and I saw a commanding officer of a ship exercising such poor judgment, I would be asking why the leadership of the Navy wasn’t taking action itself.’

He said he did not speak to anyone in the White House before he made his decision.

But Modly also recounted how his predecessor, Navy Secretary Richard Spencer, ‘lost his job because the Navy Department got crossways with the president’ in the case of former Navy Seal Eddie Gallagher.

‘I didn’t want that to happen again,’ Modly said.