Michael Clay, 45, was the head of the Urban and Regional Planning in the Geography Department at BYU in Utah when he allegedly abused the student

A professor from a private Utah university owned by the Church of Jesus Christ of Latter-day Saints has been accused of sexually abusing a female student and is said to have inappropriately touched her during some of 20 meetings in his office which he made her keep secret.

Michael James Clay, 45, was the head of the Urban and Regional Planning in the Geography Department at Brigham Young University (BYU) and according to the complaint from the alleged victim – who is originally from another country – gave her a priesthood blessing and told her he was inspired by god to engage in physical activity with her.

Clay allegedly invited the student to listen to some ‘meditation music’ and ‘told the victim that his office was a safe place and that she should not tell anyone what went on there’ after she told him she ‘was having some emotional difficulties’.

When the student talked to Clay about meeting with a counselor or psychiatrist, he allegedly told her that ‘meeting with him was more effective.’

The incidents took place between January and March near to the time the professor and unidentified student first met.

At some point between January 15 and February 15, Clay – who is from Springville – allegedly drove her up a canyon and touched her behind over her clothing.

‘(Clay) asked if it was OK. The victim said it was OK because she felt like she had to say yes,’ the charging document states.

During meeting in his office on February 19 or 20, he allegedly got the student to sit on his lap in a straddling position. 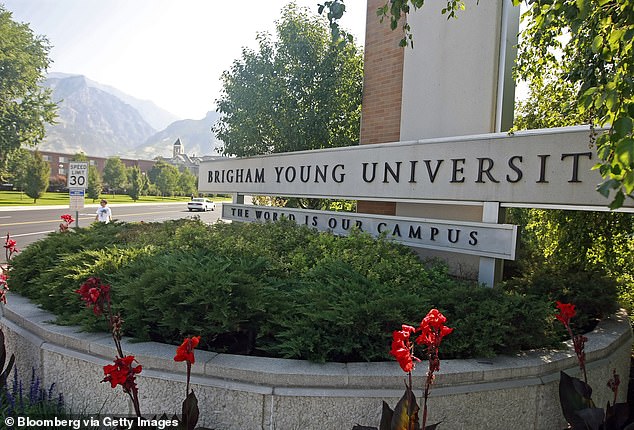 Clay allegedly invited the student to listen to some ‘meditation music’ in his office after she told him she ‘was having some emotional difficulties’. When she spoke to him about meeting with a counselor, he allegedly told her that ‘meeting with him was more effective’

‘Defendant (Clay) asked the victim to demonstrate something,’ according to charging documents. ‘Defendant sat on a sofa and had the victim straddle Defendant’s lap. The victim stated that Defendant “dry humped” her, grabbing her buttocks with his hands and rubbing his pelvis against hers.’

When she told Clay ‘that’s enough’ he allegedly didn’t stop and said she needed to keep trying. The student claims that after two more objections he stopped.

Clay allegedly text the student that she was ‘making good progress’ and that his job was to ‘help (her) on the inside’.

The student also claims he told her to delete the text messages sent between them.

‘On one occasion, (Clay) gave the victim a priesthood blessing. On another occasion, (he) told the victim that he had prayed about her and felt inspired from God to engage in physical contact with the victim,’ the documents state.

Clay was in charge of a program at the school where he had the authority to hire interns and teaching assistants.

BYU spokeswoman Carri Jenkins told Deseret News on Thursday that Clay hasn’t been employed by the university since mid-April. The school is referring all questions to the Utah County Attorney’s Office.

Clay was charged Thursday with two counts of forcible sexual abuse, a second-degree felony. His bail was set at $21,000.

According to state legislature, the charge pertains to when the victim is 14 years of age or older and, ‘under circumstances not amounting to rape, object rape, forcible sodomy, or attempted rape or forcible sodomy;.

Legislation states: ‘The actor touches the anus, buttocks, pubic area, or any part of the genitals of another, or touches the breast of a female, or otherwise takes indecent liberties with another, with intent to cause substantial emotional or bodily pain to any individual or with the intent to arouse or gratify the sexual desire of any individual, without the consent of the other, regardless of the sex of any participant.’

The offense is punishable by one to 15 years in prison.