Tradie with a death wish: Erratic ute driver slams on brakes ahead of truck to cause a collision – before storming out of his car for a heated roadside standoff

A ute driver repeatedly switched lanes and deliberately slammed on his brakes to cause a collision with a truck before storming out of his vehicle for a heated roadside confrontation. 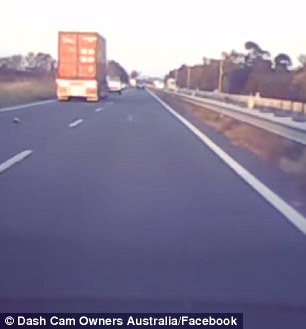 The ute then braked heavily, forcing the truck into a sudden halt to avoid a dangerous collision.

‘I’d been following this truck for most of the way from Toowoomba. He’d been doing 100 km/h consistently,’ dashcam owner Andrew said.

‘When he got into the right-hand lane to overtake a slower truck, the guy in the ute comes flying out of nowhere.

‘You can see what happens next. I stopped to support the truckie.

The ute driver eventually stopped along the highway and was seen storming off out his car to shout at the truck driver. 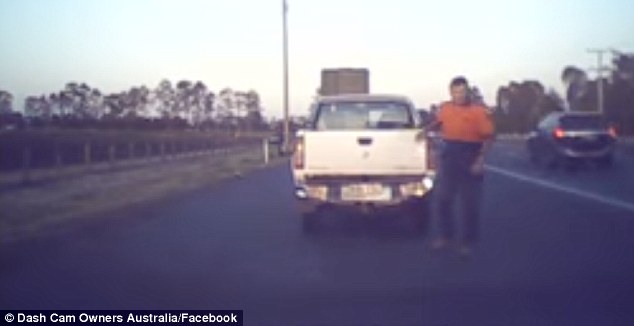 The video, which was posted on Dash Cam Owners Australia, made social media user furious at the ute driver’s behaviour.

‘Tradies are so high on roids or mad with life…..’ one Facebook user said.

‘Truckie should of done us all a favour and not braked driven straight over the top of him!!!’ another user commented.

‘It should be instant loss of license for anyone who brake checks a truck. No questions. Straight in the shredder. Should be at least a 3 year ban too,’ another comment read.