Spiralling energy prices have finally brought a ‘destructive price war’ to an end, the boss of Utility Warehouse has said, with the firm set to reap the benefits as rival providers collapse.

With Bulb becoming the latest provider to go bust and technically nationalised, UW co-chief executive Andrew Lindsay lashed out at the ‘inherent flaws’ in the energy regulator’s policy of ‘competition at all costs’.

‘Consumers now face a cost running into billions of pounds to tidy up the mess, so we welcome Ofgem’s commitment to prevent this situation from happening again, and to create a retail market that allows sustainable competition between suppliers, whilst enabling us to meet the challenges of the transition to net zero together,’ Lindsay said.

His comments come amid criticism of Ofgem for allowing many undercapitalised companies to enter the market and take a punt on wholesale prices.

Last month, the regulator launched a review into how the price cap on gas and electricity bills is calculated, and whether it reflects the risks facing companies.

But while the unfolding energy crisis has caused a raft of providers to collapse, it has been a godsend for energy-to-broadband provider Utility Warehouse.

Owned by London-listed Telecom Plus, UW is the UK’s ninth biggest energy supplier and works in a different way from its rivals.

It has a long-standing agreement with Eon under which the German firm supplies energy at a permanent fixed discount to the UK’s retail price cap and takes on all hedging risks.

That means that UW was often undercut by new firms coming to the market and slashing prices in the short-term.

This made it more difficult for UW’s 45,000 freelance agents to sell its service bundles to friends and family. UW’s strategy sees agents get incentives for signing up new customers.

But with soaring energy prices causing many rivals to collapse, UW stands to benefit as it is one of the few providers offering tariffs below the energy price cap.

Its variable tariff is priced at £1,213 per year, below the current price cap of £1,277, although that offer is only valid if customers switch over all their home services – energy, mobile and broadband. 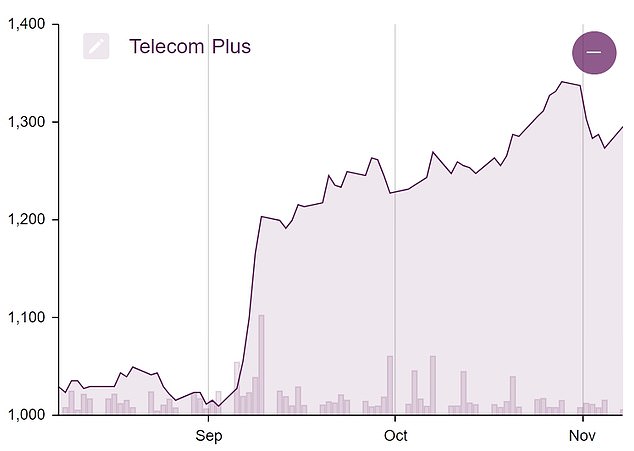 Shares in Telecom Plus, the owner of UW, have soared by over 35% in the last three months since the energy crisis took hold

‘In response to the sharp rise in wholesale energy costs during September, virtually all suppliers rapidly withdrew their discounted acquisition tariffs, leaving our standard energy tariffs amongst the cheapest in the market,’ the company said.

It hailed a ‘very strong’ start to its second half, with a net increase of over 15,000 customers during October alone.

‘Whilst we do not believe this run-rate will continue, we expect to see an increase of around 10 per cent in our customer numbers for the second half,’ it added.

Telecom Plus shares soared 8.8 per cent to £14.10 in morning trading on Tuesday. They have risen by over 35 per cent in the past three months as the energy crisis took hold.

It currently has over 660,000 customers across the services it sells, all of which are bundled into one bill.

Revenues rose 6 per cent to £371.3million in the half year to the end of September, but adjusted pre-tax profit fell 5 per cent to £26.2million.