V8 Supercars championship winner Shane van Gisbergen has made the final year of the iconic Ford v Holden rivalry one to remember with a burnout to conclude the final race of the 2022 season at the Adelaide 500.

But it wasn’t just any burnout – the Kiwi champion whipped his Holden ZB Commodore around the trophy that was on display on the track.

Then, to the delight of the crowd, the three-time champion took off his racing boot and used it to keep the throttle pinned down while he climbed out of the vehicle and onto the roof to celebrate.

‘It wasn’t too planned — I like to wing it,’ van Gisbergen said the amazing display.

‘We talked about what I was allowed to do, and they told me to do it somewhere around the trophy.

‘I was s**t-scared of hitting the thing, I left a lot of room.

‘I got out and it was still smoking — it was awesome.’

While van Gisbergen won the championship, rising star Broc Feeney has pulled off a memorable maiden Supercars win to give Holden fans a joyous farewell to the red lion at the Adelaide 500.

Feeney, who stepped into Jamie Whincup’s Red Bull Ampol seat this season after the Supercars immortal’s retirement, saved his best drive of the year for last.

‘I can’t believe it,’ an emotional Feeney said.

‘I felt like the win was always so close and to get it at the last race, in front of all these fans for Holden, it means so much.

‘In that race I was out to show that hopefully next year I can be a contender.

‘I had a wicked car … it’s just probably the best moment of my life.’

Chaz Mostert finished in second to complete the Holden podium for the final time, with van Gisbergen stoked that he was able to claim third despite a pit-lane penalty following an incident after a safety-car restart.

‘When I got into third, I was pumped. 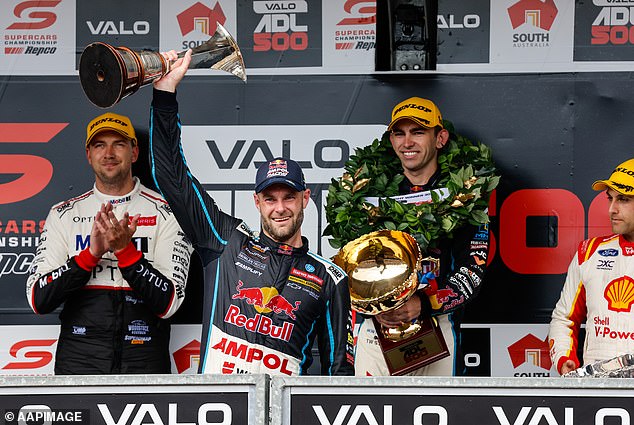 ‘I’m pretty gutted and baffled they gave us a penalty so much later.

‘I’m so glad that a Holden won too, and for Broc to get his first win and the team to go out on top… ripper.

‘So glad to be back here in Adelaide and see the stands full.’

The highlights of van Gisbergen’s 2022 include his Bathurst victory and Pukekohe send-off win. With 21 victories in 34 races, van Gisbergen admitted his dominance has given him pause for thought.

‘It feels amazing… I sort of let it sink in after Gold Coast,’ he said.

‘I wanted to come here and perform, but it hasn’t worked out.

‘What an amazing year we’ve had… I’ve tried to treasure some of moments this year. 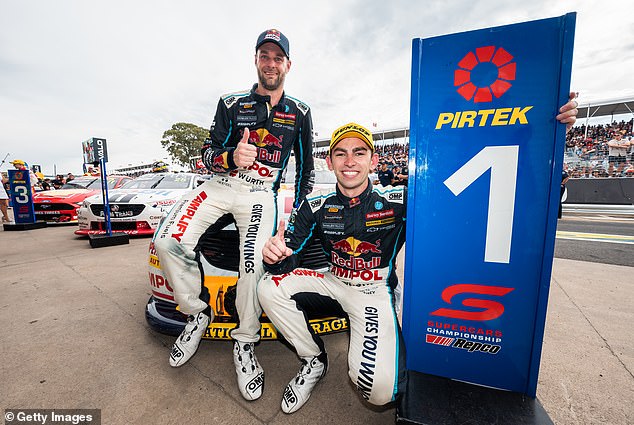 ‘You realise along the way it’s not going to be like this all the time.

‘[Pukekohe] was the best weekend I’ve had in racing… amazing how it all fell together.

‘Pukekohe was where fell in love with Supercars and wanted to be a Supercar driver.