The proportion of children getting vaccinated on time dropped for all 13 jabs in England last year.

Fewer families are managing to get their children immunised against deadly diseases such as measles, polio, tetanus and meningitis than in 2017-18.

Vaccination rates have fallen despite Government threats to stop children starting school if they’re not protected and attempts to stop anti-vaxx myths spreading.

Measles cases around the world have soared this year and, although the effects on the UK haven’t been as bad, there are concerns people are getting complacent.

Some of the fall in vaccinations has been attributed to claims they don’t work or are harmful, which Prime Minister Boris Johnson dubbed ‘superstitious mumbo jumbo’.

But many may miss the jabs because such low rates of illnesses like polio – there hasn’t been a UK case since the 1980s, thanks to the vaccine – mean people have forgotten how serious they are, one expert said.

The Government’s Health Secretary, Matt Hancock, said the drop was ‘unacceptable’ and that he wouldn’t rule out sending children home from school.

Vaccination rates fell for all 13 immunisations in England between the years of 2017-18 and 2018-19, NHS Digital figures revealed this morning. Health officials have warned the drops are ‘unacceptable’ and ‘concerning’

The damning statistics were released by the NHS earlier today and show more needs to be done to increase how many children get vaccinated before starting school.

For individual jabs, the decreases from last year ranged from drops of 0.2 to 1 per cent.

The worst change was for the DTap-IPV-Hib among one-year-olds, which dropped by one percentage point to 92.1 per cent – its lowest level since 2008-09.

The smallest fall was for the Hib/Meningitis C protection among five-year-olds, which dropped 0.2 per cent from 92.4 to 92.2.

Coverage for the a single dose of the measles, mumps and rubella (MMR) vaccine by the age of five is 94.5 per cent, down from 94.9 per cent in 2017-18 and below the 95 per cent target set by the World Health Organization.

HOW DID RATES OF THE 13 VACCINATIONS CHANGE LAST YEAR?

To give full protection, however, children should have two doses of MMR by the time they’re five, and only 86.4 per cent of children had received this last year.

Health Secretary Matt Hancock said: ‘Falling childhood vaccination rates are unacceptable. Everyone has a role to play in halting this decline.

‘The loss of our measles-free status is a stark reminder that devastating diseases can, and will, resurface.

‘We need to be bold and I will not rule out action so that every child is properly protected.’

The vaccines covered by the figures include the DTap-IPV-Hib, also known as the six-in-one, which protects against diphtheria, tetanus, whooping cough, polio, Haemophilus influenzae type b (Hib) and and hepatitis B.

Children also get the PCV vaccine, to protect against a pneumonia-causing bacteria; the Rotavirus vaccine; the MMR vaccine and one for meningitis C.

WHERE HAVE THE FEWEST CHILDREN HAD BOTH MMR JABS BY AGE FIVE?

WHERE HAVE THE MOST CHILDREN HAD BOTH MMR JABS BY AGE FIVE? 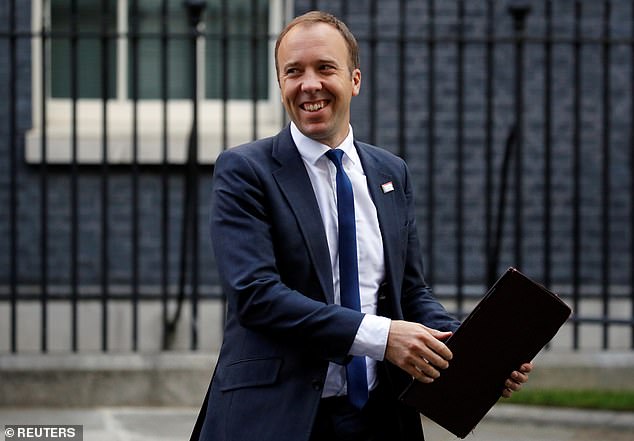 Most require more than one dose before the child turns five in order for them to be fully effective. Coverage rates for second doses tend to be significantly lower than for firsts.

The NHS’s figures gave a geographical breakdown of the country and showed all of the 20 boroughs with the worst MMR coverage were in London.

Westminster fared worst, with just 64.1 per cent of youngsters being given both doses of the MMR jab by their fifth birthday.

At the other end of the scale was County Durham, where the rate of five-year-olds having both MMR doses was 96.4 per cent. The rate for England was 86.4 per cent.

The NHS’s medical director for England, Professor Stephen Powis, said: ‘Vaccines are a vital, life-saving part of our country’s public health and the numbers of children not being vaccinated is concerning.

‘No one should be complacent about getting their own or their child’s jabs and so the NHS is taking action, with its partners, to combat the decline and to reverse the dangerous effects of complacency about vaccines.’

NHS England said it would be writing to GPs to promote catch-up vaccination programmes for children and young adults who missed them, updating advice on its website to address parents’ concerns about jabs, and working to develop a ‘comprehensive strategy’ to be published later this year.

The NHS figures comes as the UK was one of four countries to this year lose its ‘measles eliminated’ status from the World Health Organization.

This is awarded to countries which have managed to almost completely prevent the spread of the infection for three years.

As well as the UK, Greece, Albania and the Czech Republic also lost their elimination status as the countries battle against rising numbers of people catching the illness.

Public Health England’s head of immunisation, Dr Mary Ramsay, added: ‘Although these changes are small proportions, these are big drops in terms of public health.

‘The trend is a concerning continuation of what we’ve seen in the last five years.

‘No parent should be in any doubt of the devastating impact of these diseases. It’s vital that everyone recognises the value of vaccines and takes up this life-saving offer.’

WHICH VACCINES SHOULD CHILDREN HAVE HAD BY THE AGE OF 18?

Vaccinations for various unpleasant and deadly diseases are given free on the NHS to children and teenagers.

Here is a list of all the jabs someone should have by the age of 18 to make sure they and others across the country are protected: