‘We’re now going to play against one of the best teams in the world by name, history and everything’: Valencia captain Dani Parejo hails Chelsea ahead of Champions League clash

Chelsea suffered a 1-0 home loss to Valencia in a Champions League baptism of fire for new boss Lampard back in September.

But the Blues can qualify for the knockout stages with victory at the Mestalla Stadium in Wednesday’s return clash, leaving Parejo wary of Chelsea’s rapid strides under their former midfield favourite Lampard.

A win for either side would lock down a last-16 tie with a Group H game to spare, but Parejo has warned his players to expect one of their toughest games this term against the west Londoners.

‘It is true that our win there was the first game (in the competition), and while we must not take anything away from that win, Chelsea come here in great form and with big confidence,’ said Parejo.

‘We are now going to play against one of the best teams in the world by name, history and everything.

‘They are really coming at a good time, they lost to Manchester City making a great game, but they had won several games previously.

‘We must focus on ourselves, we have shown we can compete against anyone. So no extra motivation is needed.’ 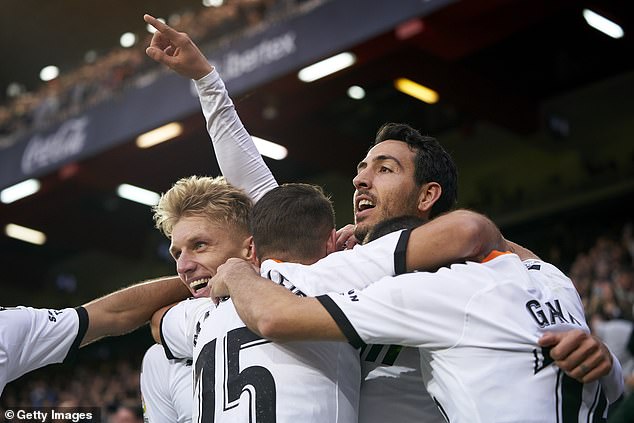 ‘I have experienced many nights like this here, arriving on the bus to a big reception, with a special and unique atmosphere,’ said Parejo.

‘On nights like this the Mestalla does not fail, the atmosphere will be impressive.

‘When we go hand in hand fans and team, almost always the result is usually in our favour.’