The value of the pound jumped this afternoon after Emmanuel Macron and Angela Merkel delivered Brexit boosts to Boris Johnson.

Mr Macron said he was open to hearing British alternatives to the Irish backstop as he signed up to Ms Merkel’s plan to give the UK the chance to come forward with a proposed replacement.

Meanwhile, Ms Merkel said she was willing to work right up to the October 31 Brexit deadline in order to find a way to stop the UK crashing out of the EU without an agreement.

The comments prompted the pound to rise sharply against both the euro and the dollar as currency markets appeared to respond to a reduced risk of a No Deal Brexit.

Pound sterling temporarily gained more than one per cent against both currencies because of renewed optimism that the UK and EU will be able to strike a new accord.

This afternoon the pound was up 0.85 percent to 1.2233 dollars, and up 0.84 percent against the euro at 90.63 pence for one euro, having earlier reached three-week highs. 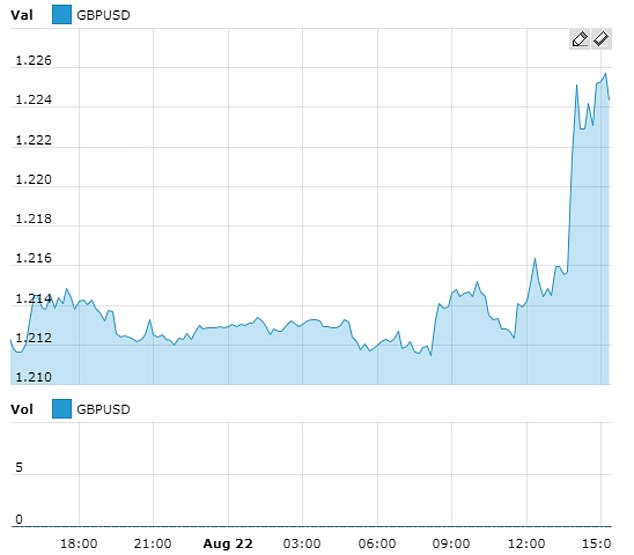 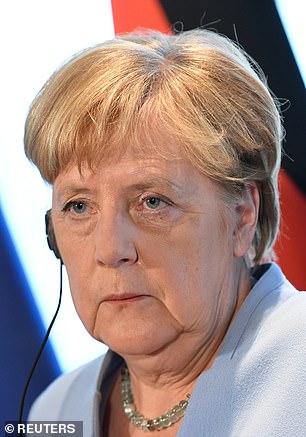 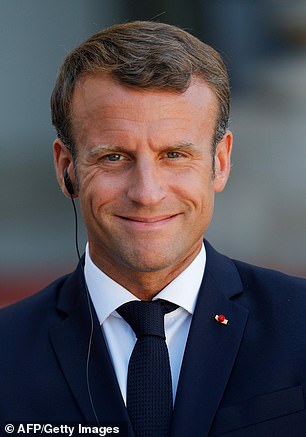 Angela Merkel, pictured in The Hague today, insisted she would work all the way up to the current October 31 Brexit deadline to stop a No Deal split while Emmanuel Macron, pictured in Paris today as he met Boris Johnson, said he was open to finding a new way forward in comments which prompted the pound to rise

Britain’s currency has been subjected to periodic fluctuations ever since the UK voted to leave the EU on June 23 2016.

Major speeches, interventions and votes in the House of Commons have caused the pound to rise and fall.

But the positive noises made by Ms Merkel and Mr Macron today have prompted a rally.

The French president had previously insisted that the existing Brexit divorce deal could not be changed.

But today he appeared to move slightly on that position as he said he was open to hearing backstop replacement ideas from the UK.

He said: ‘We will not find a new Withdrawal Agreement within 30 days which will be very different from the existing one.

‘It is just that what Michel Barnier has negotiated can be amended while complying with the integrity of the single market and [stability in Ireland]… then we can find a solution.’

He said he wanted there to be a ‘useful’ month of talks between the two sides and insisted that any new ideas must be compatible with the framework of the existing divorce deal.

He said: ‘What Angela Merkel said yesterday and which is very much in line with the discussions we have had from the very beginning is that we need visibility in 30 days.

‘I believe that this also matches the goal of Prime Minister Johnson. No one will wait until October 31 to find the right solution.’

Ms Merkel had appeared to give the UK 30 days to come forward with alternatives to the backstop as she spoke alongside Mr Johnson in Berlin yesterday.

But today she stressed that the true deadline remained October 31 when the UK is scheduled to leave the EU.

The suggestion that she is willing to work right up to the Halloween deadline in order to prevent a No Deal fueled a rise in the value of the pound.

Speaking in The Hague she said: ‘I said that what you want to do in three or two years, you can do in 30 days – or rather, you would have to say: you can do it by October 31.

‘So it’s not about 30 days, but they were symbolic for the fact that you can do it in a short period of time.’

Ms Merkel said she was giving the new date ‘because Great Britain said they would like to leave the European Union on 31 October’.

‘And until then we have to work on it – work on it if the will exists on both sides,’ she said.