Van Dijk ‘delighted and honoured’ to sign for Liverpool

Virgil van Dijk has hailed a ‘proud day for me and my family’ after completing a record £75million move from Southampton to Liverpool.

The move, the highest fee ever paid for a defender, will go through on January 1 after months of negotiations and controversy, including Liverpool having to apologise to Southampton for their heavy handed approach in the summer.

Van Dijk also thanked the staff, players and fans at St Mary’s, although he admitted it had been a ‘difficult last few months’, as his desire to leave for Anfield became clear.

In a statement released via Twitter, Van Dijk said: ‘Delighted and honoured to have agreed to become a Liverpool player. Today is a proud day for me and my family as I join one of the biggest clubs in world football!

‘I can’t wait to pull on the famous red shirt for the first time in front of the Kop and will give everything I have to try and help this great club achieve something special in the years to come.

‘I would also like to take this opportunity to say thank you to Les Reed, the board, manager, players and fans and everyone at Southampton. I will always be indebted to the club for giving me the opportunity to play in the Premier League and despite a difficult last few months I have thoroughly enjoyed my time at Saints and have made friends for life at the club. Thank you for everything.

‘Thank you for all the messages of support. I’m now looking forward to meeting my new team-mates and getting started.’ 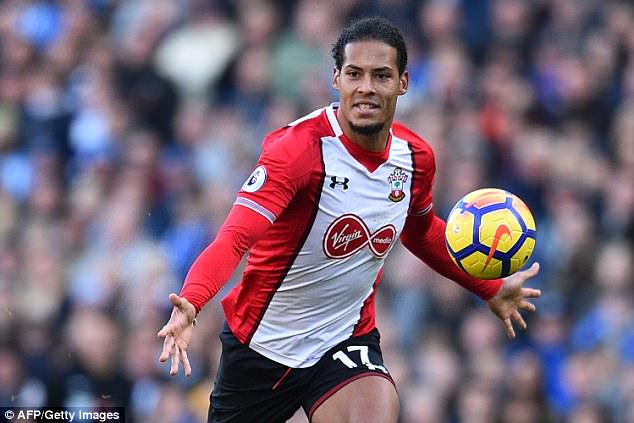 The move, the highest fee ever paid for a defender, will go through on January 1

Liverpool announced the signing on Twitter as they posted a picture of Van Dijk posing with a Reds shirt in front of a Christmas tree at his house.

Talks have been ongoing in recent days, with Southampton leaving the Dutch defender out of their squad to face Tottenham on Boxing Day.

The fee will see Van Dijk’s former club Celtic earn around £7.5million from a sell-on clause. Van Dijk is expected to earn around £200,000 a week as part of the transfer.