The statue of Theodore Roosevelt in front of the American Museum of Natural History has been attacked by vandals.

A group calling itself the ‘Monument Removal Brigade’ claimed responsibility for the attack early Thursday, splashing the New York City icon with red paint under the cover of darkness.

The bright red paint on the base of the 10-foot-tall statue had been removed by 11am Thursday, as city crews worked with pressure washers behind yellow police tape.

The statue, erected in 1939, depicts the 26th president on horseback, flanked on either side by a Native American ‘chief’ and an indigenous African holding rifles. 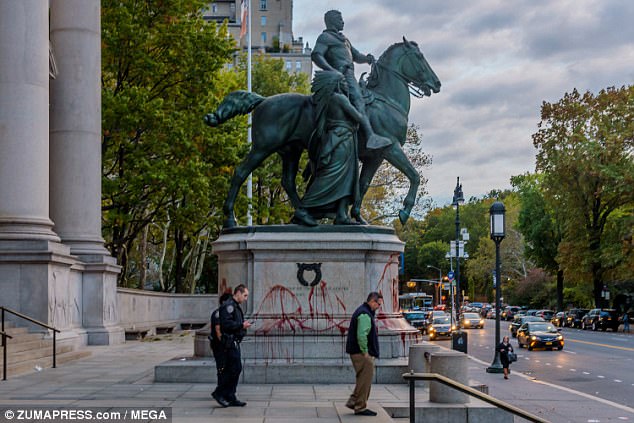 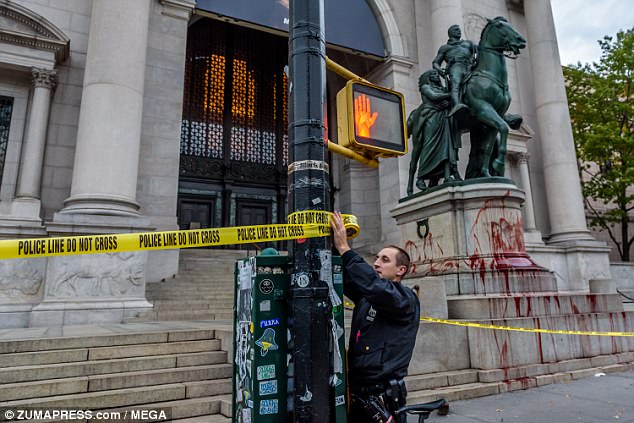 A police officer tapes off the crime scene. City crews had removed the paint by 11am Thursday

The group claiming responsibility for the attack wrote in an online screed that the statue embodies ‘patriarchy, white supremacy, and settler-colonialism’.

‘This is not an act of vandalism,’ claimed the previously unknown group. ‘It is a work of public art and an act of applied art criticism.’

The group said the targeting of the monument’s base was intentional, to symbolize that ‘it is bloody at its very foundation’.

The vandals called on the city to remove the monument, which sits at the entrance of the museum co-founded by the former president’s father.

The call to remove the statue comes amid a growing national debate over historical monuments, which began with statues of Confederate leaders but has quickly spread to include more esoteric symbols of alleged historical misdeeds. 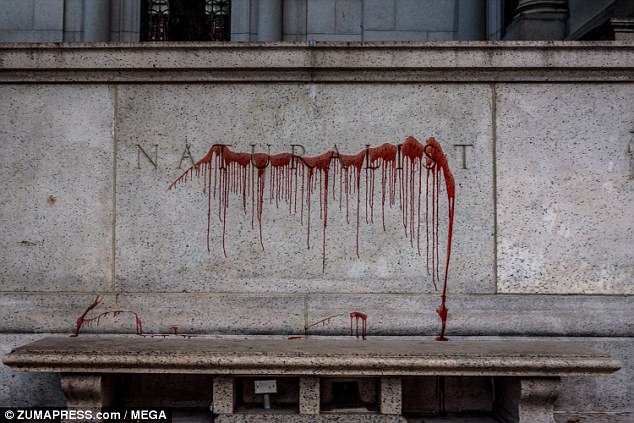 The vandals also crossed out words inscribed near the monument, including ‘naturalist’ and ‘conservationist’. The museum was co-founded by Teddy Roosevelt’s father 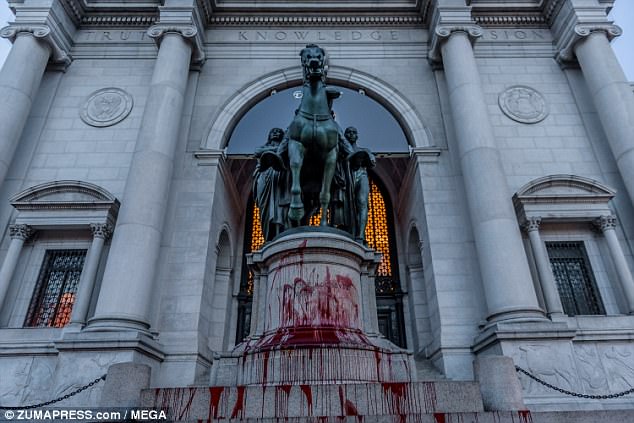 The mayor of New York City, Bill De Blasio, has formed a commission to review ‘symbols of hate’ on city property, with recommendations to remove statues expected in November.

The nearby statue of Christopher Columbus, which adorns Columbus Circle, has also come under attack by activists.

The Roosevelt statue was the subject of a small protest earlier this month, in which activists rallied outside the museum calling for the city to remove the statue and to rename Columbus Day ‘Indigenous People’s Day’.

In addition to serving as president, Roosevelt was a New York City’s police commissioner and a Republican governor of New York.

He is one of the four former presidents depicted on Mount Rushmore, alongside George Washington, Thomas Jefferson, and Abraham Lincoln.