The 33-year-old beauty had on a plunging number that made her arms, legs and waistline all look very trim as she added high heels.

The reality TV siren has lost over 50lbs since she welcomed her first child, son Cruz, with husband Jax Taylor.

Skinny lady! Vanderpump Rules star Brittany Cartwright looked very slim in a little dress this week as she looked into a mirror The 33-year-old beauty had on a plunging number that made her arms, legs and waistline all look very trim as she added high heels 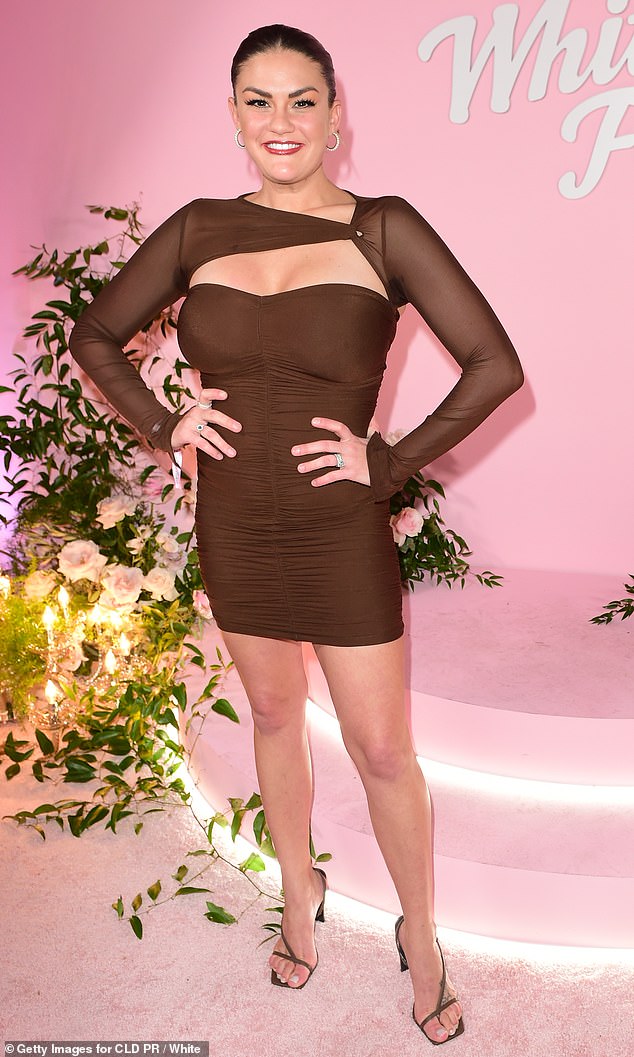 A 10! The looker hit the White Fox boutique for an event and noted she was in CLD Style

The looker was heading to the White Fox boutique for an event and noted she was in CLD Style.

This comes after she wore skinny jeans in late August.

Cartwright shared a behind-the-scenes look at her upcoming fall campaign for Jenny Craig.

The television personality was wearing her skinny jeans as she appeared in the entertaining video on her Instagram.

She captioned the post, ‘BTS shooting for our fall campaign with @jennycraigoffical. It was so much fun, I got to shoot with my mom, my baby boy, and my amazing personal coach Lauren! I’m so proud of my mom, she has lost over 20lbs, too!!’

The star hasn’t shied away from taking fans along her weight loss journey.

Spokesperson: The TV vet shared a behind-the-scenes look at her upcoming fall campaign for Jenny Craig in late August

‘Being able to have this goal and reach it is a big deal to me, the more results I saw the more motivated I became!’

In early August she showed off her new look in a swimsuit.

The looker shared photos of her slim figure when on vacation with Jax and pals such as Kristen Doute at the Royalton Riviera hotel in Cancun, Mexico.

He also said he liked her new shape. ‘I am so proud of my wife she has worked so hard on something that wasn’t easy for her…you’re my idol babe!’ he gushed on social media.

He followed that up with a tweet: ‘And for the record, I never once in my life told my wife to get large breasts she wanted a boob job her whole life.

‘I simply gave her the doctor. So enough of the sh*t I made her do it. You people are sad,’ he added. 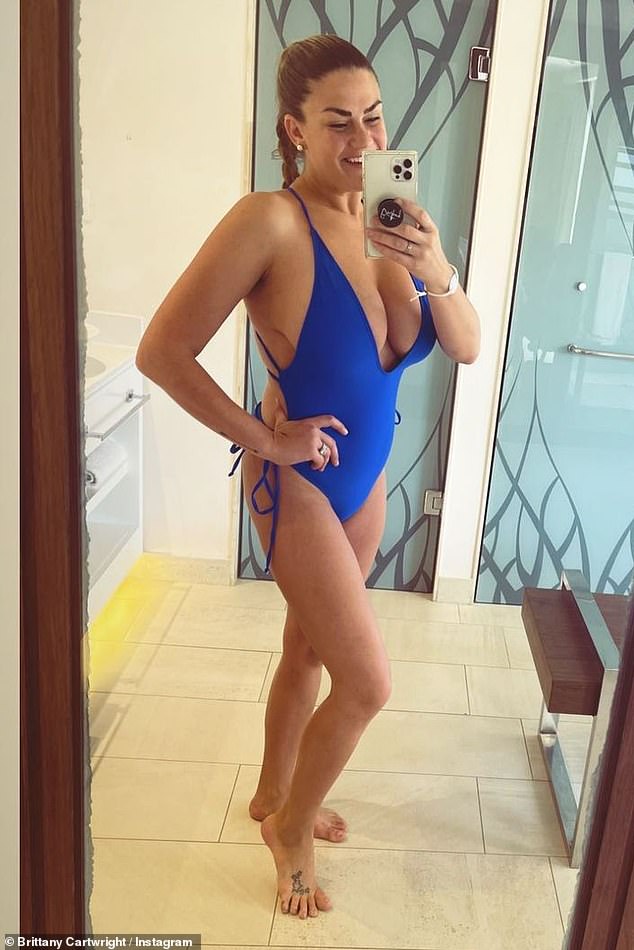 Slim is in: Cartwright has never looked better as she posed in a plunging royal blue swimsuit in August while on a vacation 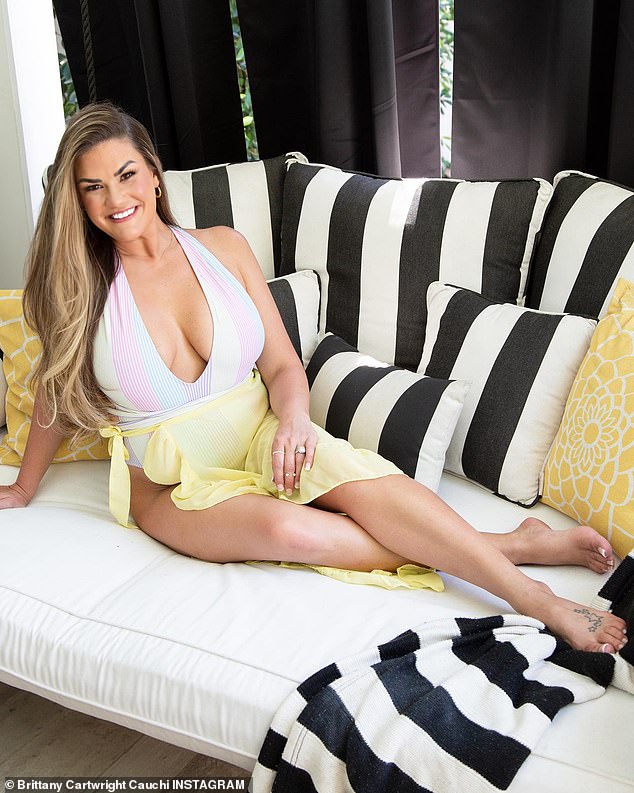 Slim and sweet: Cartwright posted a pinup photo to Instagram that lit up her page

In January she teamed up with Jenny Craig which has helped her with weight loss.

‘I’m down 39lbs!! Woo hoo,’ wrote Brittany, who shot to fame alongside Jax during their time on Vanderpump Rules.

She took the show to her main Instagram page, where she posted a behind-the-scenes video montage from her latest Jenny Craig shoot.

‘I’m feeling great!’ she gushed in the caption of the post, where her husband Jax Taylor leapt into the comments and wrote: ‘Hot wife alert!!!’

Jax and Brittany began dating in 2015 and the ups and downs of their relationship unfolded in front of reality TV cameras on Vanderpump Rules.

Although they broke up at one point because of his infidelity with their co-star Faith Stowers, they eventually patched up their relationship and married in 2019.

They welcomed their bouncing baby boy Cruz in April 2021, and Brittany proudly posts frequent pictures of him to her Instagram. 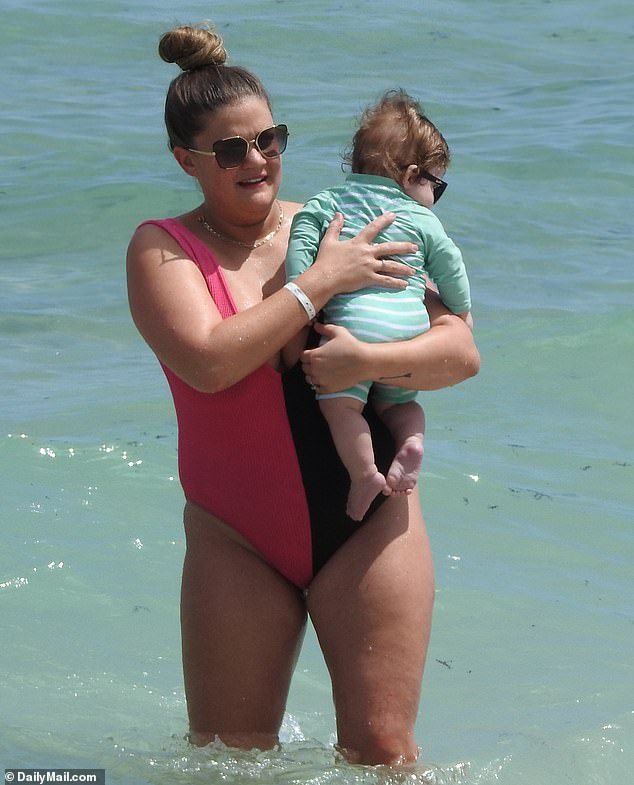 Then and now: Brittany is pictured in September 2021, before embarking on her Jenny Craig journey 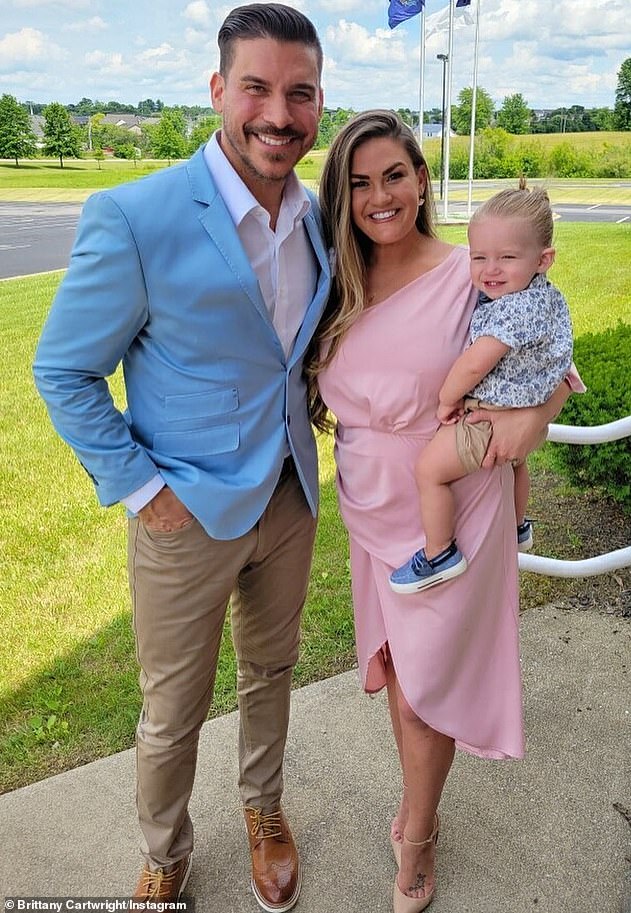 Baby mine: The Vanderpump Rules star gave birth to her son Cruz by her husband Taylor in April 2021 and then teamed up with Jenny Craig this January

Brittany, who grew up on a farm in Kentucky, teamed up with Jenny Craig in January and embarked on their Max Up weight loss program.

When she first signed onto Max Up, an official press release announced that she intended to take off at least 30lbs, a goal she has now exceeded.

She eventually announced that that after she adopted the Jenny Craig program, she lost a whopping 22lbs in just 11 weeks.

Celebs ranging from singing stars Mariah Carey and Jennifer Hudson to sitcom stars Valerie Bertinelli and Jason Alexander have endorsed the brand in the past.