Angry clashes have erupted after dozens of ‘vandwellers’ lined a trendy suburb and use residents’ gardens as toilets.

Around 35 Vans, horse boxes and caravans have parked up near a cemetery in Easton, Bristol, leaving the community furious.

The ‘vandwellers’ say they have been left no choice but to bed down in their vehicles after being priced out of the city’s housing market.

Vans, horse boxes and caravans have parked up near a cemetery in Easton, Bristol, leaving the community furious

However, the drivers are legally free to do so as long as their motors have full tax and MOT.

Residents want the vandwellers to leave amid claims they urinate in their gardens and leave a mess.

But tensions reached boiling point at a meeting on Tuesday evening as the group were confronted in a heated showdown at St Anne’s Church.

More than 50 people packed out the church hall after the vandwellers called a meeting to explain their presence and hear residents’ views.

One mother said: ‘I have had a conversation with a man who ”whipped it out” and urinated right in front of me and tried to justify that. I have a six-year-old girl.’

Another homeowner said the back of her house had  ‘had become a toilet’. 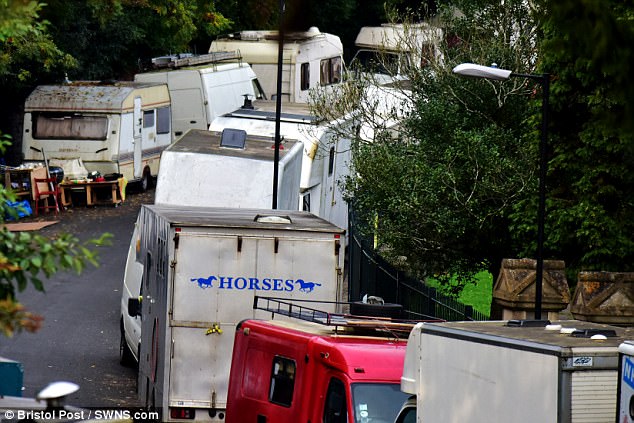 Vandwelling: Britons priced out of the market turn to life on the road

More Britons are packing up and turning to life on the road as they find themselves priced out of the property market.

Vandwelling or ‘Van Life’ as it is called on social media, is seen as an attractive way to live in cities like London without shelling out for extortionate rent rates.

The average monthly rent in Greater London is around £1,560, while the average wage in England and Wales is around just £820.

A survey conducted last year found that there were 480 monthly searches for ‘living in a van’ online, which is a 50 per cent rise on 2015.

But there are both pros and cons to hitting the road.

Money can be saved on rent and bills, while living in your vehicle or caravan offers the freedom to move around the country.

It is also completely legal, as long as the vehicle is fully taxed and has an MOT.

However, the cons include fuel prices, parking costs, no fixed toilet and the time-consuming search for a safe parking area.

However, the vandwellers said they had been urinating in bottles and using compost boxes to dispose of waste.

Eleven caravans have been ordered to move by the council, but officers are still trying to find a secure site for the other vehicles. 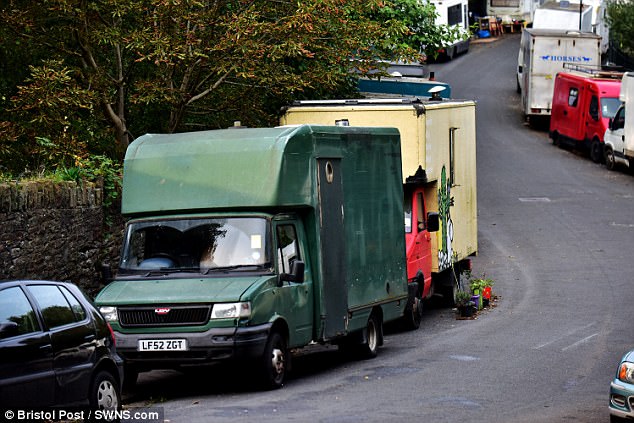 Eleven caravans have been ordered to move by the council, but officers are still trying to find a secure site for the other vehicles

‘We’re dealing with 10 years of neglect in terms of social housing and a government that has made it much, much harder.

‘There’s been a lot of work to find a way out of this but it’s part of a much wider systematic problem.’

Chris Swinscoe, from the council’s neighbour enforcement team, said: ”We currently don’t have any notices we can serve the vandwellers to get them to go. We have served 11 notices on caravans and they will have to move by October 8.

‘We could be looking at a public space protection order but that will take time.’