Vanessa Bryant, 39, posts photos of the family on vacation in France just weeks before 43rd birthday

Vanessa Bryant took to Instagram to show her followers photos of her family on vacation in France weeks before what would have been her late husband’s 43rd birthday.

Kobe Bryant’s widow, 39, shared pictures she took while swimming off the French coast in a blue and gold multi-patterned swimsuit. She also wore large hoop earrings.

She posted pictures with her youngest daughter, Capri, while sitting in a boat together and of her oldest daughter, Natalia, holding Capri.

Family silliness on vacation: Vanessa Bryant with her 2-year-old daughter Capri in France on holiday 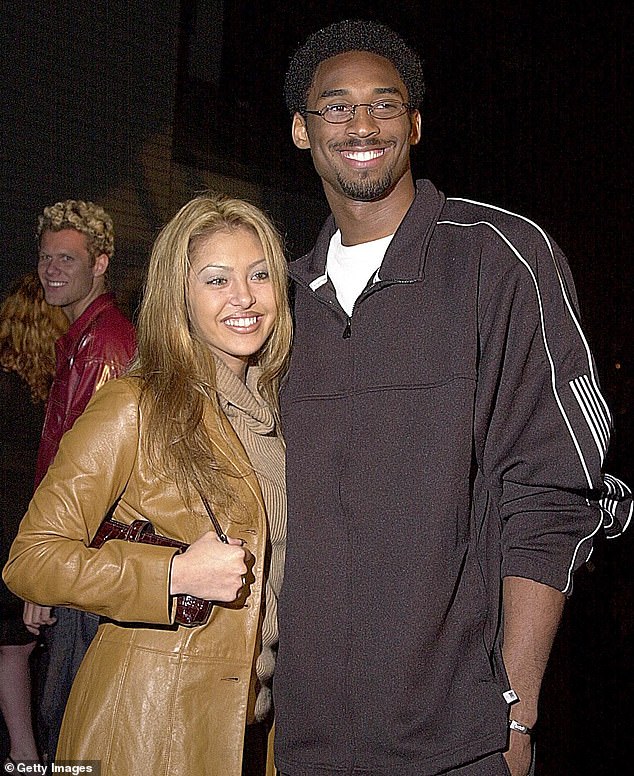 So much has changed: Vanessa with her late husband Kobe Bryant at his Adidas launch party in 2000. Kobe died in a helicopter crash with the couple’s 13-year-old daughter, Gianna, in January 2020

The family spent time on the small peninsula, Saint-Jean-Cap-Ferrat, which juts out into the Mediterranean sea.

The mother of four lost both Kobe and her second child, Gianna, in a January 2020 helicopter crash. The pair, along with seven others, were on their way to a basketball tournament when, because of poor weather conditions, their helicopter ran into the side of a mountain.

The helicopter did not have a black box, so the exact cause of the crash is still unknown, but the National Transportation Safety Board attributed the crash to disorientation of the pilot caused by poor visibility. 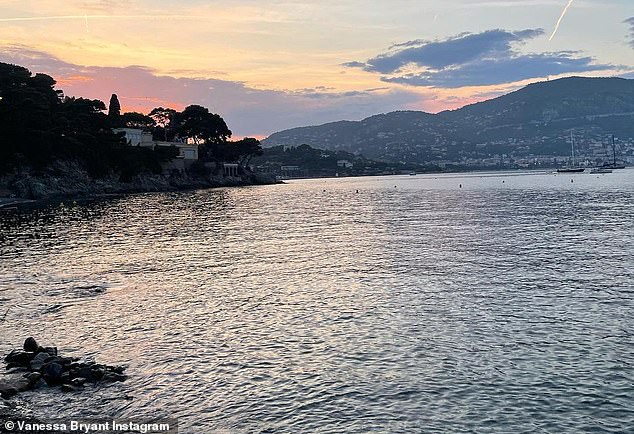 A secluded vacation spot: A view from the Bryant’s vacation destination on the peninsula of Saint-Jean-Cap-Ferrat which juts out into the Mediterranean Sea 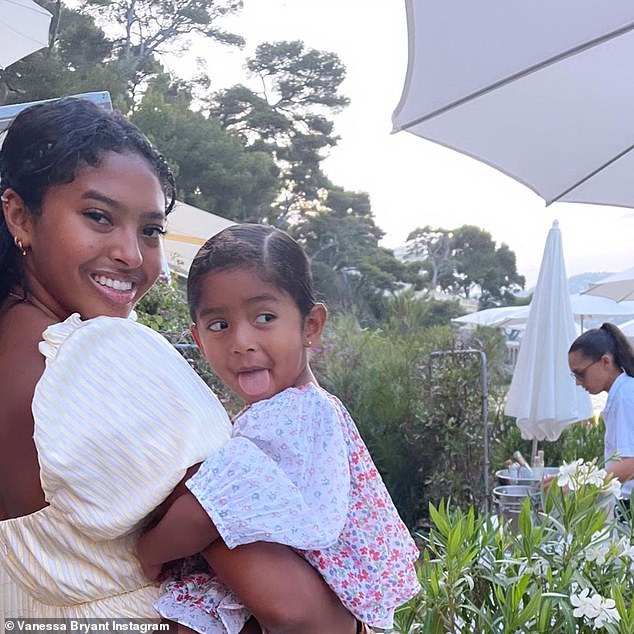 Sisters with an age gap: Natalia Bryant, 18, holds her sister Capri, 2, while the youngest Bryant still has her tongue out 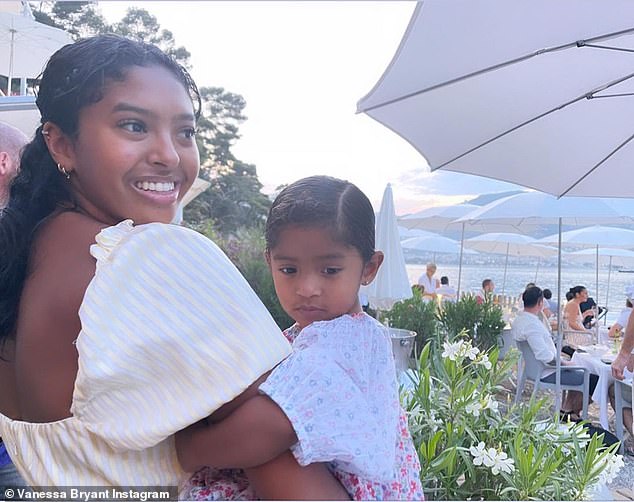 A getaway vacation: Another photo of the oldest and youngest Bryant daughters who went on vacation just weeks before what would have been their father’s 43rd birthday

Back in May, Vanessa Bryant paid a moving tribute to Kobe at the Naismith Memorial Basketball Hall of Fame.

She said: ‘I used to always avoid praising my husband in public because I felt like he got enough praise from his fans. Along the road someone had to bring him back to reality. Right now I am sure he is laughing in heaven because I’m about to praise him in public for his accomplishments on one of the most public stages.

Vanessa revealed she decided to follow in Kobe’s footsteps by not preparing her speech beforehand. 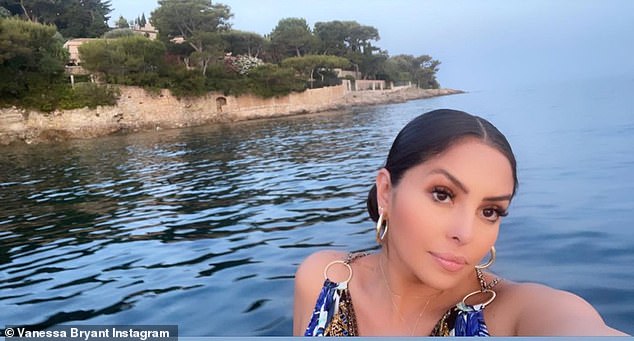 A moving tribute: Vanessa, pictured here on the water during her vacation, gave a powerful speech in Kobe’s honor at the Naismith Memorial Basketball Hall of Fame ceremony in May 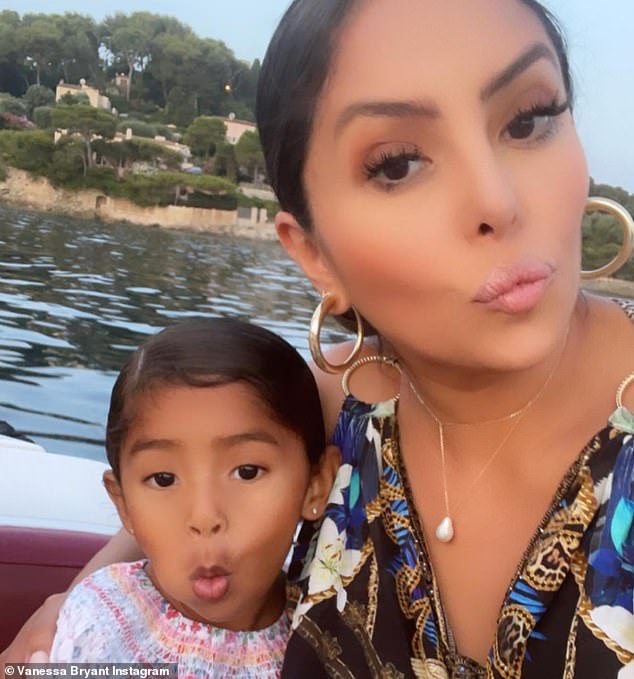 Family first: In Vanessa Bryant’s speech, she made sure people knew that Kobe’s skills on the court were great, but his work as a father to their four daughters was just as important

She explained: ‘I don’t have a speech prepared about my husband because he winged every single speech.

‘He was intelligent, eloquent, and gifted at many things, including public speaking. However, I do know that he would thank everyone that helped him get here, including the people that doubted him and the people that worked against him and told him he couldn’t attain his goals. He would thank all of them for motivating him to be here. After all, he proved you wrong.’

Vanessa noted that while Kobe is best remembered for his skills on the basketball court, he always considered his family to be his priority. 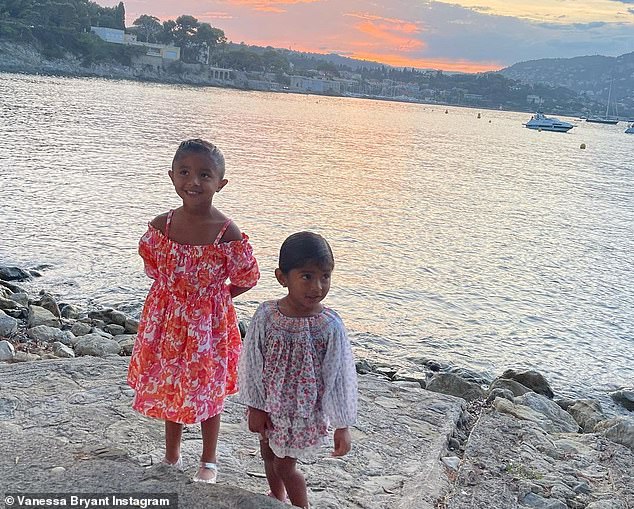 ‘The very best girl dad’: Vanessa said Kobe was a great father to their four girls and thanked him for learning from his mistakes and for the family the two had together

She concluded her speech by sending a series of thank you messages to her late husband.

She explained: ‘Dear Kobe, thank you for being the best husband and father you could possibly be.