Autumn has kicked in and Halloween is just around the corner.

But with the temperatures hovering in the mid-90’s Fahrenheit in much of the Los Angeles region on Sunday, Vanessa Hudgens decided it was the perfect time to spend time with a few of gals pals, slip into a stylish bikini, and enjoy a pool party.

And the High School Musical alum and her friends would capture a few moments of all of their fun in the sun and share them on their Instagram pages.

Summer fun in the fall: With the temperatures soaring into the mid-90s Fahrenheit on Sunday, Vanessa Hudgens decided to slip into a stylish bikini, hook up with a few of her gal pals, and enjoy the day with a pool party

Hudgens, 32, wasted little time in assembling her crew of friends that included the likes of DJ besties GG Magree and Mija, as well a choreographer and dancer Laura New.

For their day of summer fun in the fall, Hudgens would change into a baby blue-patterned bikini that included a top that tied along the center.

‘It may be October but it still feels like summer. Oh la,’ she professed in a selfie snap taken in a dining room. 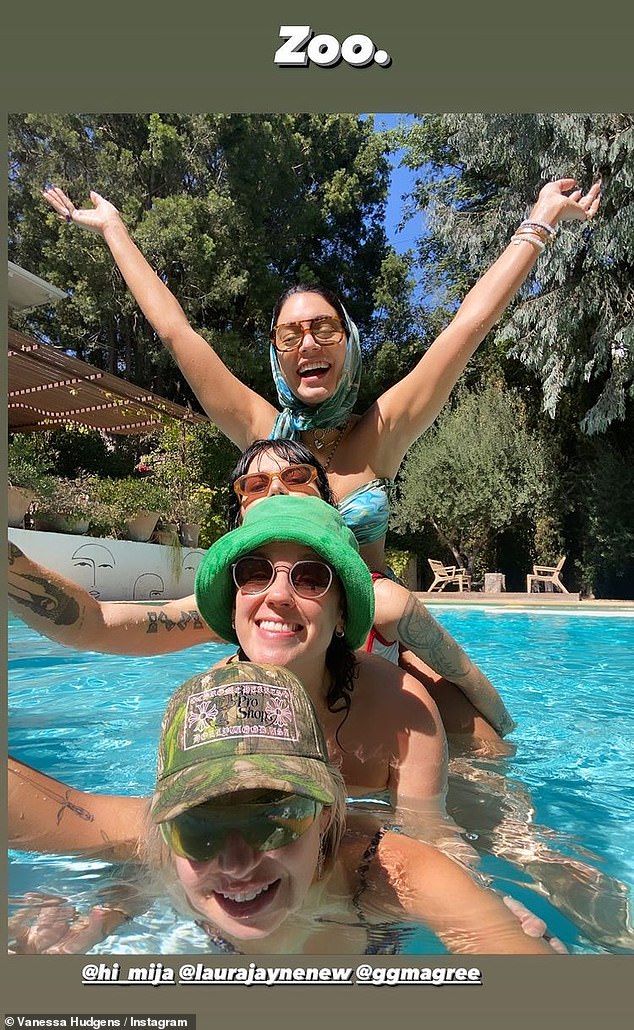 Pool party: Hudgens enthusiastically lifted her arms into the air while getting playful with lady friends Mija, Laura New and GG Magree

She also wore a matching head scarf over her brown tresses which were styled long and flowing, along with a couple of necklaces and bracelets.

And with the sun glaring down on such a hot Southern California day, she also thought it was a good idea to wear a pair of big-frame sunglasses.

While out getting playful in the pool, the four ladies piggy-backed each other for a selfie photo that Hudgens shared on Instagram just minutes after her bikini post. 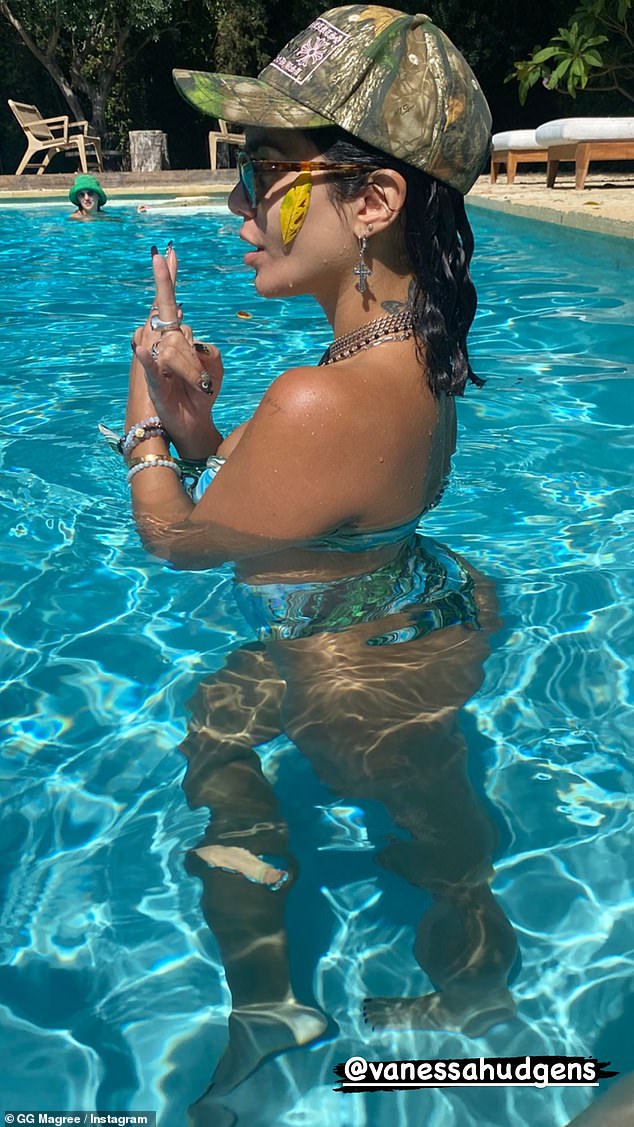 Fun in the sun: Magree captured Hudgens making scissors with her fingers 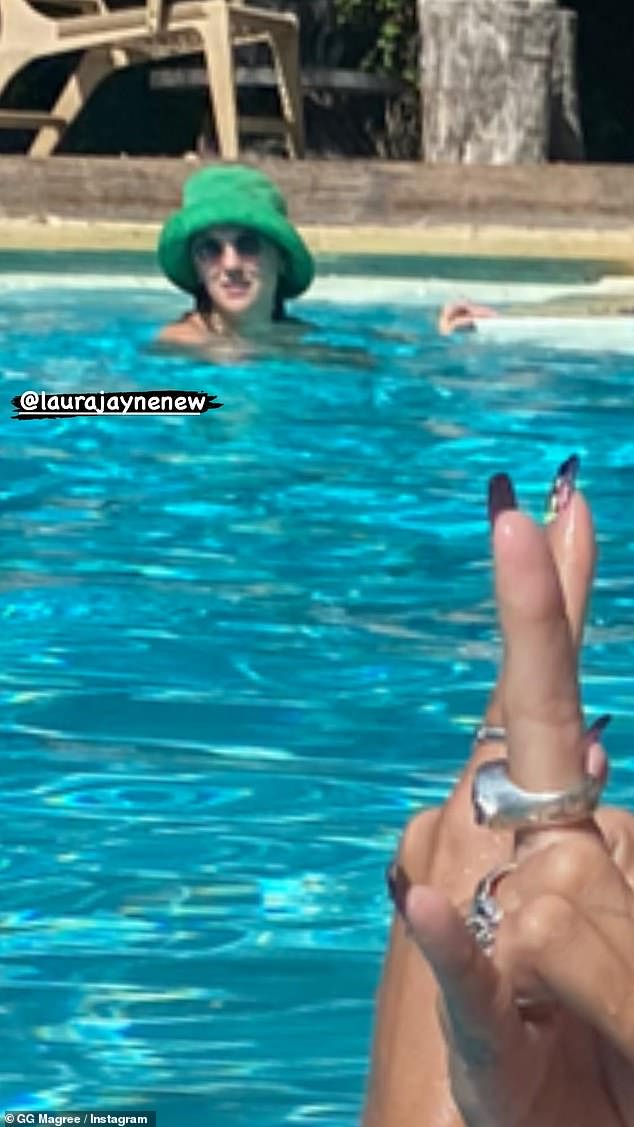 Magree, 32, would also capture a few moments of all their fun in the sun with some photos she shared on Instagram.

In one image, Hudgens can be seen standing in the pool at a side angle, while flashing her fingers like scissors. Her follow-up photo was a closeup of her fingers, with New in the background, wearing a green hat.

‘Whole Sundays,’ Magree captioned a final photo of the four ladies standing in the pool striking a pose in their respective two-piece swimsuits. 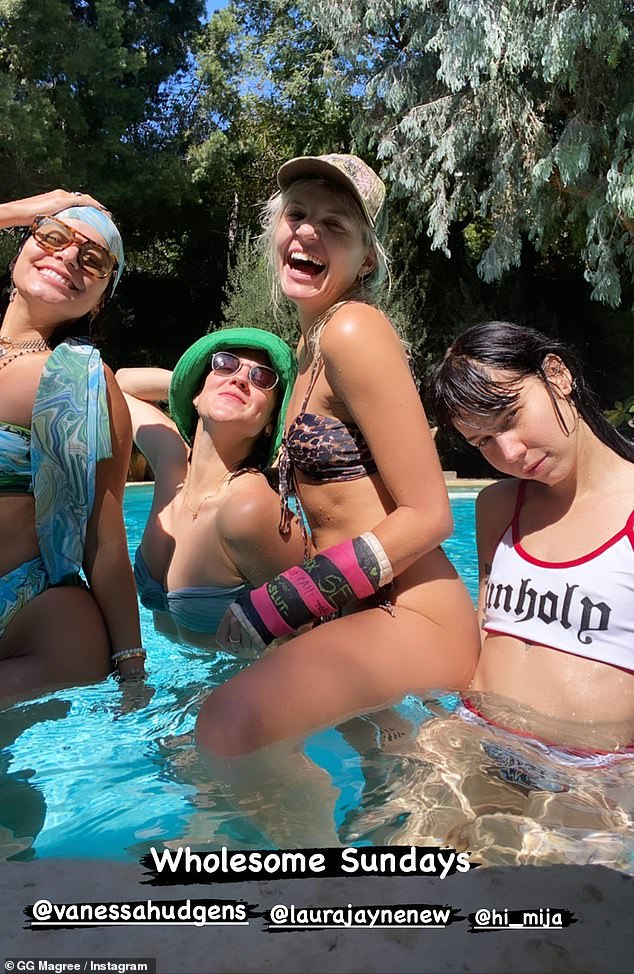