Vaping teens are NOT turning to tobacco, study suggests

As teenagers have flocked to trendy e-cigarettes, public health officials have been in a near panic that they will move on to traditional, combustible cigarettes.

But a new study from Georgetown University Comprehensive Cancer Center offers some reassurance that this may not be the case.

E-cigarettes – especially the USB-like Juul – have become more popular than regular cigarettes or any other drugs among teenagers.

Typically, the devices contain nicotine ‘juices’ that get heated and vaporized. Often, a single pod or canister is as potent as a pack of cigarettes – and teenagers don’t realize how much nicotine they’re inhaling.

Nicotine is highly-addictive, so the concern is that vaping will be a gateway to smoking, and raising risks of heart disease, lung cancer and early death from an early age.

But the authors of the new study insist that if more teens were going to adopt regular cigarettes, it would have happened at the 2014 ‘tipping point’ – rather than teenage smoking declining even more rapidly, as it has thus far.

E-cigarettes are immensely popular among teenagers – and have only become more so with time.

In 2013, cigarettes were were almost three times more popular for high school students than vaping was.

By 2015, those statistsics had been flipped on their heads.

By then, 2.39 teenagers had vaped and just 1.37 million had smoked combustible cigarettes in the past year.

It seemed, briefly, that e-cigarettes of unknown dangers were doing a public service by drawing high school students away from regular cigarettes that we knew for fact were highly dangerous.

But that glowing impression of the little battery powered vaporizers didn’t last.

Just a year later, in 2016, 1.7 million high school-age Americans admitted that they vaped regularly, puffing on Juuls or other devices at least in the month before they were surveyed.

And by earlier this year, Food and Drug Administration Commissioner Scott Gottlieb was condemning vaping as an ‘epidemic’ endangering young impressionable minds and bodies.

His announcement – practically a declaration of war on the devices – cited a host of research indicating that e-cigs might work as cessation tools for current smokers, but for teenagers, naive to cigarettes and nicotine in general, they were just a gateway to the real deal.

The FDA has since cracked down on ad campaigns and flavors that are particularly appealing to teenagers (mainly targeting the makers and distributors of the blockbuster vape, Juul).

But the latest research suggests that the tipping point for teen vapers to transition to the harder (combustible) stuff – and smoking has just continued to fall faster and faster out of fashion among American youth. 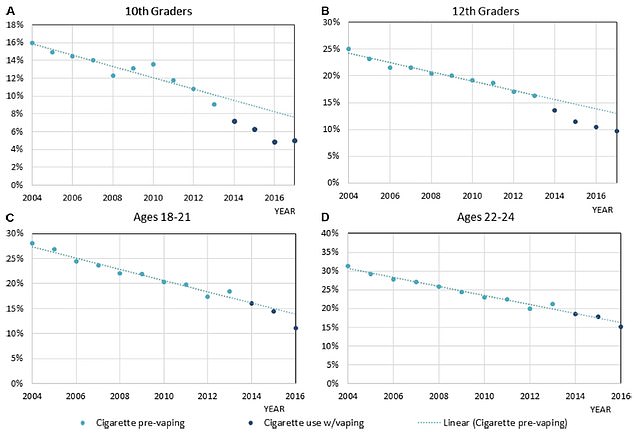 Among all of the young age groups that the Georgetown University researchers assessed, fewer and fewer people have been smoking cigarettes before and while vaping

Vaping still didn’t have a huge following in 2013, but its popularity surged in 2014, according to self-reported data on young peoples’ usage.

E-cig sales doubled around the same time, too, suggesting to the research team that this was the critical adoption period, which they dubbed the tipping point.

Cigarettes have long been losing popularity in the US in general and among teenagers in particular – but their decline really kicked into high gear in 2013, which, as the researchers point out, coincides with the e-cig surge for 18- to 21-year-olds.

The researchers assert that if e-cigs were being so widely adopted and so significantly pushed young Americans toward cigarettes, we already would have seen cigarette smoking take an upward turn, or at lest for its decline to slow.

‘While caution is warranted in interpreting our findings, they paint a consistent picture of accelerated reductions in youth and young adult smoking prevalence as vaping became more widespread,’ the researchers wrote.

They conceded that their research isn’t causal, and e-cigs may still act as a gateway substance for some, ‘but the aggregate effect of this relationship at the population level may be small enough that its effects are swamped by other factors that influence smoking behavior,’ the authors wrote.

But Dr Michael Ong, a University of California, Los Angeles professor who specializes in tobacco and behavior, said it’s still too soon to tell – much less to let our guard against a new nicotine product down.

‘I think we are all worried about a potential increase in cigarette use rather than the decrease we have seen,’ he told Daily Mail Online.

‘That increase may not be apparent for some time due to the survey approaches we use (for example, among adults, instead of the youth/young adult users). Similarly, we are actively working to try to prevent the transition of youth/young adults transitioning from vaping to regular cigarette use.’