A rare vase a pensioner took to an auction house in a shoe box has sold for a world record £381,000.

The unnamed woman’s late husband bought the piece of pottery by the celebrated artist Hans Coper for £250 in the 1970s.

After he died five years ago his widow put the 12ins item away in a cupboard because she wasn’t fond of it.

She was stunned when an expert told her it could be worth a few thousand pounds after she took it to a routine valuation day at her local auctioneers in Devon in a white shoe box.

And when they gave it a pre-sale estimate of between £4,000 to £6,000 she told them she thought that was too optimistic.

But luckily for the pensioner, two of the biggest collectors of pottery in the world had a ‘clash of egos’ at the sale and between them drove

the bidding up to six figures.

Hans Coper is now regarded as ‘studio pottery royalty’ and the previous record for his work stood at £181,250 in 2011.

Nic Saintey, an auctioneer at Bearnes, Hampton & Littlewood of Exeter, Devon, said his client was aware the arrow-head style vase was by Coper but had no idea it was so valuable.

He said: ‘Her husband collected paintings and pottery in the 1970s and early ’80s. He paid £250 for it brand new from a gallery in London.

‘He had liked the vase but she was less keen on it and when he passed away five or six years ago she put it away in a cupboard.

‘She saw an advert of ours for a free valuation day and brought it in in a white shoe box. I didn’t expect to see an item like that inside.

‘I saw it and straight away said ‘oh, I know what that is’.

‘I told her Hans Coper work can make very good money today and she went a bit pale. 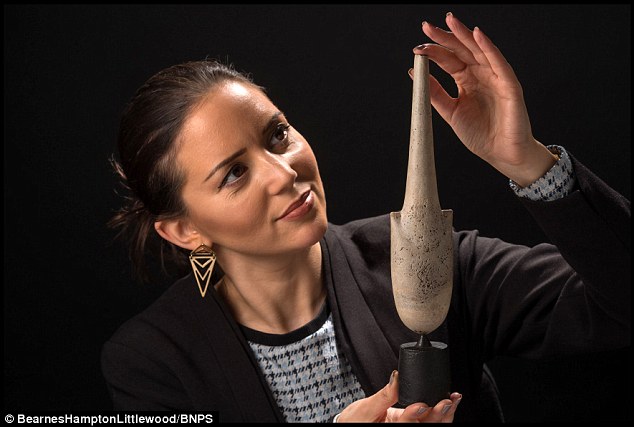 Valuer Lucy Marles with the vase. Coper’s widow took the vase in to get a valuation and was initially told it was worth between £4,000 to £6,000

‘I called her a few days before the sale to say we had had a lot of interest in it and it might make £20,000 and told her to listen in on the sale on the internet.

‘But it was a bit of a perfect storm scenario on the sale day.

‘We had two of the biggest collectors of pottery in the world who decided to get stuck in and it became a clash of egos.

‘We were incredulous. We were expecting it to go for tens of thousands of pounds but not £380,000.

‘The client was also shocked. I don’t know what she will spend the money on but she has children so I presume they will benefit.’

Hans Coper, whose father was Jewish, fled Nazi Germany before the outbreak of the Second World War and came to England.

He worked for famed potter Lucie Rie after the war, although he had no previous experience.

In 1958 he left Rie to set up his own studio and became strongly influenced by ancient Aegean artefacts although his pieces were always functional as well as sculptural.

The world record piece was part of the Cycladic series Coper made when he lived in Frome, Somerset, in the 1970s.

Mr Saintey said: ‘Hans Coper was fascinated by ancient artefacts and the arrow head vase is quite strange in that it is a modern piece from the 1970s based on a pre-historic artefact.

‘It has a small hole in the top for a single flower stem but I suppose it is more of a piece of sculpture.’

Arrow head pieces were fired in two pieces and then joined by a short metal pin and Coper usually made only four or five examples of each variation.

This one has a matt ivory-glazed body and manganese base.