A vegan activist’s public speech about animal cruelty was abruptly interrupted after his megaphone was stolen by a pedestrian.

A group of activists gathered in Yagan Square, in Perth’s CBD, earlier this month to call on meat-eaters to reconsider their diets.

But a video posted to Facebook shortly after August 1 rally revealed it was not appreciated by some members of the public.

The clip, shared by activist Tash Peterson, shows her pacing around in front of Perth Busport delivering a passionate address while a line of supporters behind her hold signs urging passersby to watch animal abuse documentary, Dominion.

‘Every day we consume their murdered bodies and their exploited animal secretions,’ she shouts as she’s heckled by a group of passing pedestrians.

‘All meat, dairy and egg animals are sent to murder factories where their throats are slit and their bodies are chopped into pieces.’

She then passes the megaphone to a male companion who begins reciting gruesome details about agricultural practices and asking people to question their eating choices.

‘Dairy cows have their babies taken away from them and killed because they are not profitable,’ he says.

‘If I was to get a glass of human milk and put it on that bar up their you would go “yuck”, and that is from your own species.’

‘These decisions are killing us. The number one killer of humans is heart disease, which is reversible from a plant based diet.’ 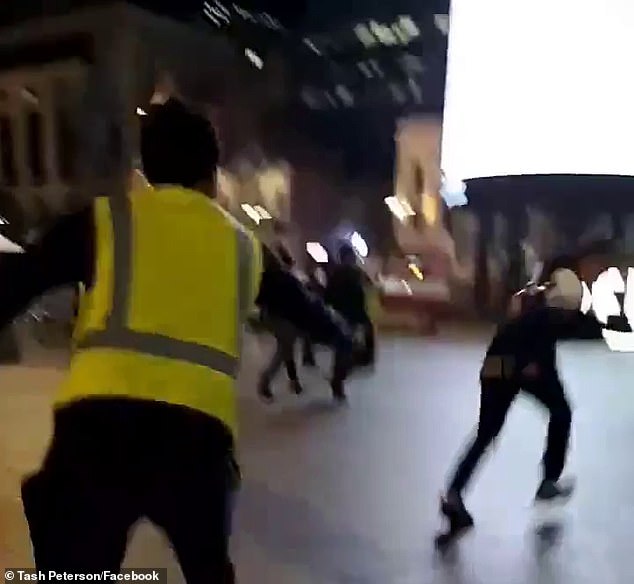 As the speaker began speculating on the cause of the coronavirus outbreak, another man decided to cut his tirade short.

Running past, a pedestrian snatches the megaphone from his hands and continues legging it down the promenade.

‘Coronavirus was started in China, either in bat laboratories or..’ he says, as the megaphone is ripped from him grasp.

The activist can then be seen chasing the man down the pavement, where he reportedly was able to retrieve back the equipment. 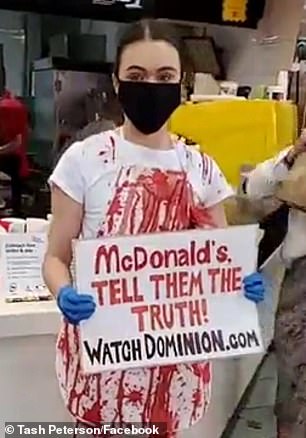 Vegans flocked to the comments to praise the activists’ work.

‘What a voice for the voiceless!’ one person wrote, championing their efforts.

Another added: ‘Thank you- thank you so much for what you do.’

However, others deemed them a ‘nuisance’.

‘Do you even work a job and contribute to society or do you just like being a nuisance to it?’ one man questioned.

It is not the first time vegan activism rallies have been criticised for being too invasive.

Ms Peterson made headlines last month for two brazen protests, one staged in McDonalds and the other in a supermarket.

In the first, the 26-year-old dressed in a bloodied apron with a fake butchered pig’s head under her arm and stood in front of a McDonald’s counter with a sign urging customers to watch Dominion.

On July 29, she wore a cow suit and held a bloodied bottle of milk while standing in front of a supermarket’s milk fridge with a sign reading: ‘I was violated, they (took) my babies and my sons so you could have my milk.’ 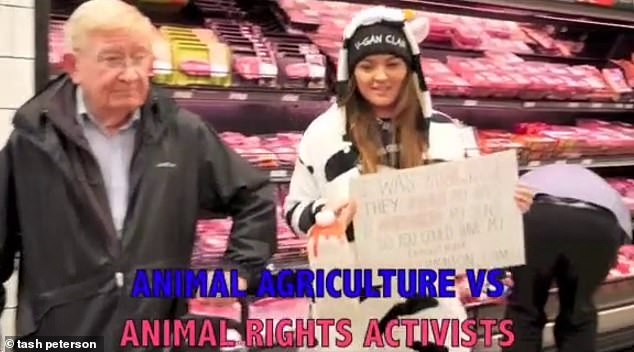