One of Australia’s most notorious vegan activist has stormed a designer store in only a g-string with red paint smeared across her breasts to abuse customers for buying animal products.

The shock-tactic demonstrations have targeted diners in food courts, butchers, meat isles in supermarkets, and families eating out in busy restaurants.

Now, in her latest outlandish stunt, the social media influencer has taken aim at fashion enthusiasts perusing a Louis Vuitton in Perth.

A video posted online shows the animal activist marching into the luxury store with her derrière and breasts exposed, clutching a sign reading: ‘If you’re not vegan, you’re an animal abuser’.

Lifting the board above her head, she parades around the store attempting to shame shoppers for buying items featuring animal-derived materials.

‘Who was murdered for your leather bag, down jacket, and woollen jumper,’ she chants, as security guards attempt to usher her to the front door.

‘If you buy animal skin, wool, fur, feather, and scales, you are paying for the most horrific animal abuse on this planet. You are contributing to an animal holocaust.’

A security guard snatches the sign, prompting a tug-of-war between the pair as unimpressed shoppers stare at the almost naked activist digging her heels into the ground. 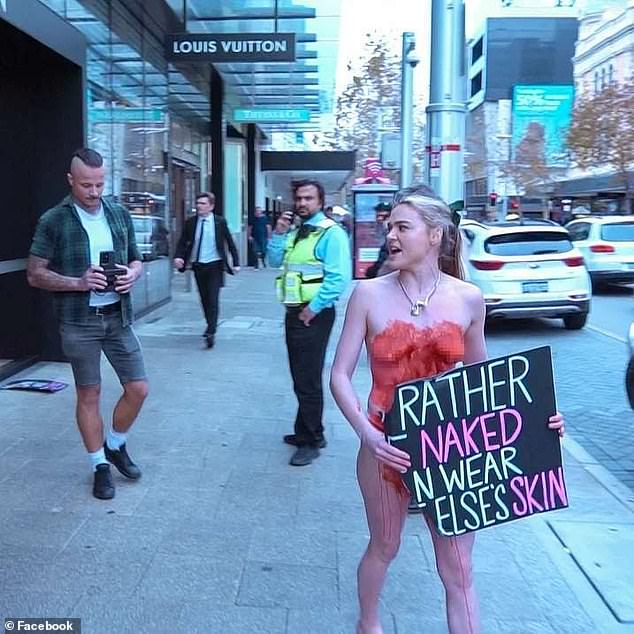 The social media influencer marched into the designer store in Perth wearing only a nude G-string, with red paint daubed from her chest down to her crotch 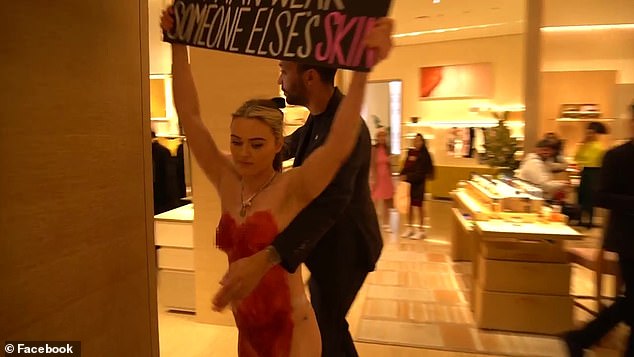 Security guards tried to block her from progressing deeper into the store, as she stormed through chanting:’ If you’re not vegan, you’re an animal abuser’ 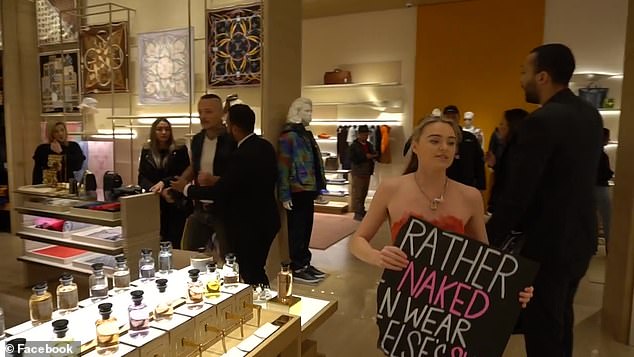 As the board snaps  in half, Ms Peterson grabs what is left of her sign and walks off to continue her tirade through the shop.

‘If you’re not vegan, you’re an animal abuser. Louis Vuitton are responsible for the murder of cows, sheep, goats, foxes, minx, ducks and pigs,’ she screams.

‘Louis Vuitton have blood on their hands, and so do you if you are not vegan.’

Security guards and management follow behind, attempting to block her passage through out the store, and stop her accomplice filming.

One tried to grab her sign, but only succeeded in ripping some of it off and she continued undeterred until she was eventually herded out the door.

‘Thank you, Louis Vuitton is a great brand, thank you,’ the man says calmly guiding her out the door, as she continues screaming into the street.

Her antics left social media users divided, with some praising her work while others felt her approach would be detrimental to her cause.

‘Go Tash. You make it so obvious just how crazy the animal rights movement is,’ one person wrote.

‘The arrogance and attitude of this nutter is such a waste of peoples own free time,’ another added.

‘This person is trespassing on private property with no intent for the purpose the property is intended. Also if you look at the people in the shop. She won no friends.’

Ms Peterson, who moved to Melbourne in June, is currently back in Perth where she faced court on August 12 for disorderly conduct.

Last month, Western Australia initially denied her entry into her home state due to her spate of high-profile protests.

In June, she was banned from every pub in WA, after she was slapped with a disorderly behaviour charge for ambushing diners at a busy seafood restaurant and publicly chastising them about the ‘fish holocaust’.

Ms Peterson and a group of other activists stormed the Bathers Beach House restaurant in Fremantle in Perth’s south in May. 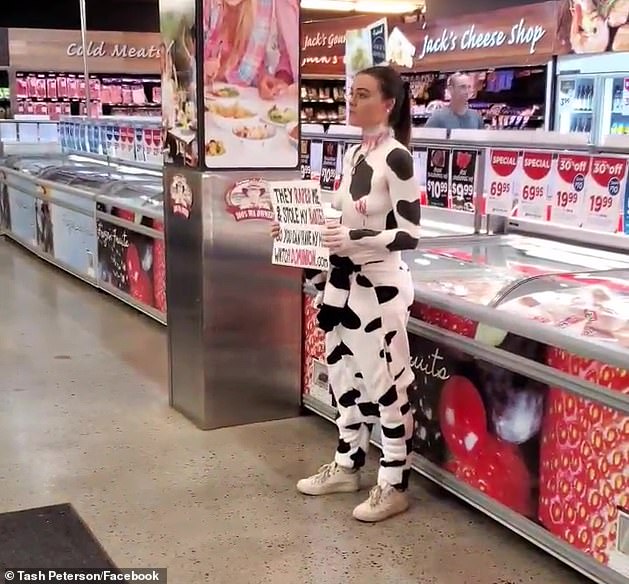 In another stunt, the militant vegan went topless and painted herself in cow print to protest outside a butcher’s shop

They proudly filmed her stood on a table where she called diners ‘animal abusers’ and shouted out a pre-written speech while furious diners yelled ‘boo’ and told her to ‘shut up’.

The Instagram and OnlyFans star has also dressed in bloodied aprons and stormed into restaurants and supermarkets like McDonald’s, KFC and Coles.

She even interrupted an AFLW match by running onto the field at Perth Stadium.

The serial protester ran around for about a minute before she was tackled by Fremantle midfielder Kiara Bowers long enough for security to catch up.