An Adelaide pizzeria has been slammed online after they hung a dead cow from the roof of their restaurant.

The cow, who was killed and eaten before being turned into a statement taxidermy, is visible from the streets and is ‘purposely confronting’.

The pizzeria describe themselves as having an ‘agenda of authenticity and transparency’ who wanted to promote animal welfare. 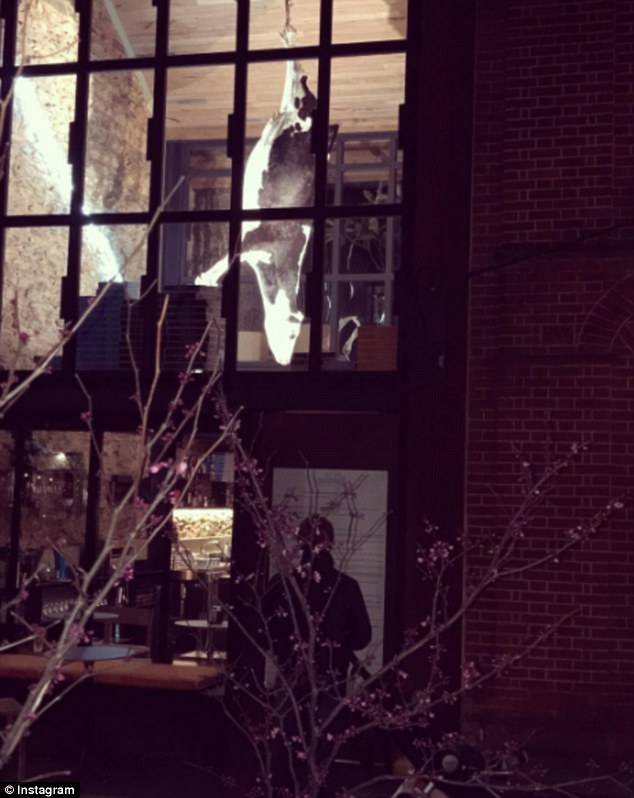 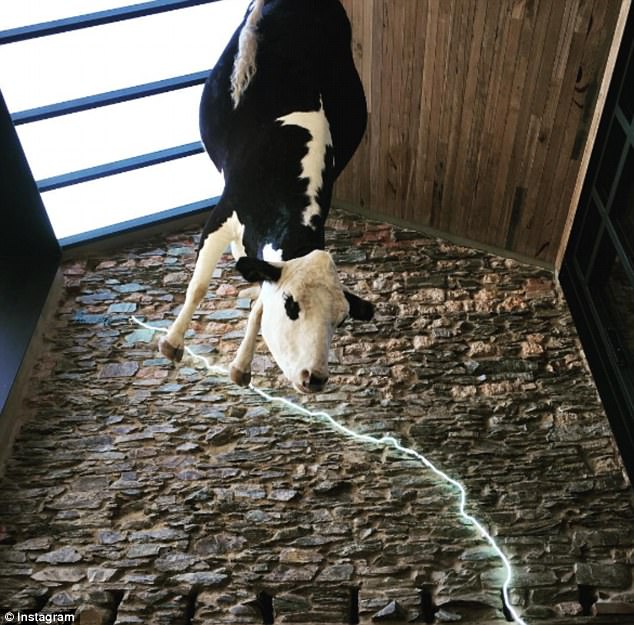 The cow is meant to be ‘purposely confronting’, aiming to show people the reality of their food 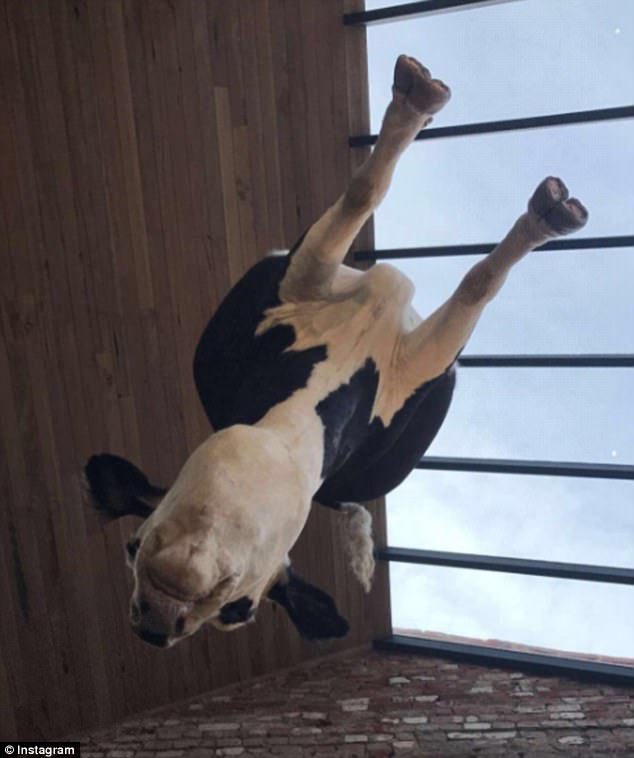 The restaurant wrote in a Facebook post the purpose of the cow was to make consumers ‘stop and think’ about the realities of the diary industry and to understand the origins of the food they’re eating.

‘She has not been hung for decoration,’ the post said.

‘The installation has a mission: it aims to draw a connection to the true consequence of consuming dairy.’

Despite the restaurant being designed to look like a slaughterhouse made of steel, glass and stone, online critics have hit back against Etica for their ‘hipster bullshit’.

‘Would you like it were that your dog hanging there? Your cat? There is some hipster bullshit,’ one person wrote on Facebook.

Many people called the restaurant ‘sick’, ‘disgusting’ and ‘vile’ while others said the cow was a ‘cruel, ugly decoration’. 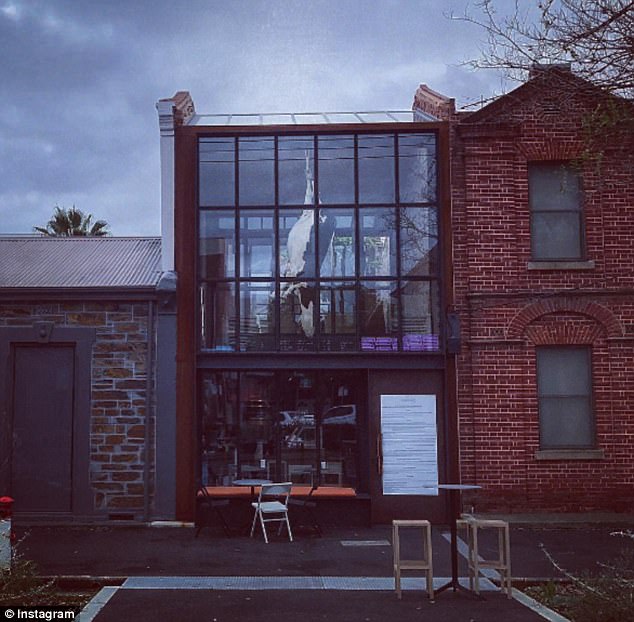 Etica said the cow was not hung ‘for decoration’ but to make a statement on the industry, as does the slaughterhouse appearance of their restaurant 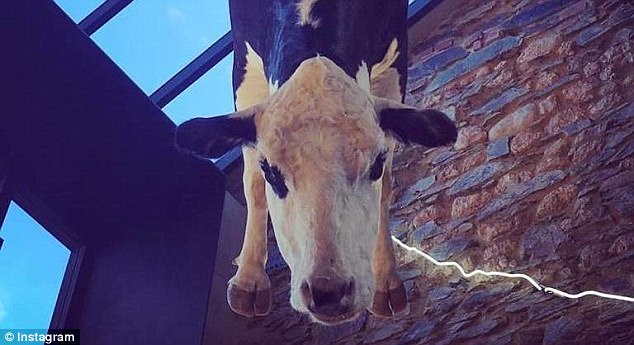 Online critics hit back at the restaurant, saying it was ‘vile’, ‘disgusting’ and ‘hipster bullshit’ 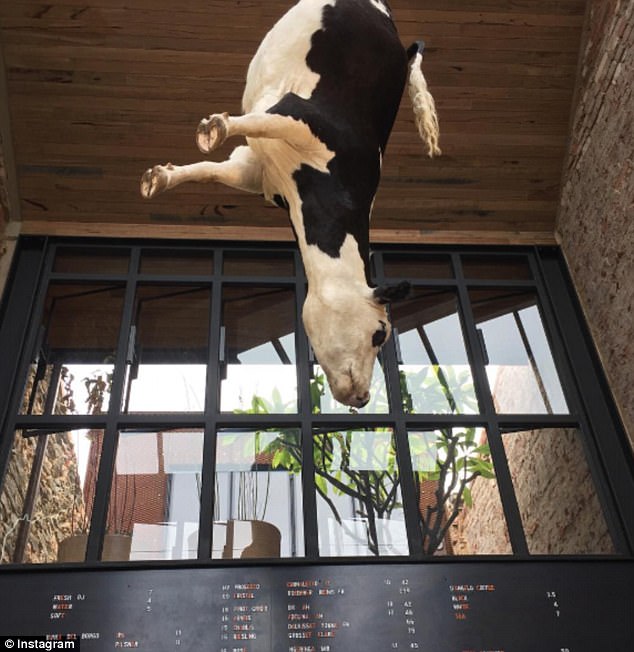 ‘Why is there a dead cow hanging from the rafters? How cruel, horrific and just plain evil to see such a gentle creature depicted in this way. Shame on you!,’ someone wrote

‘Are we going back to the dark ages where people watch dead bodies hanging and decaying???!!! Show some respect to living beings you old barbaric excuse for a human,’ someone wrote.

‘Why is there a dead cow hanging from the rafters? How cruel, horrific and just plain evil to see such a gentle creature depicted in this way. Shame on you!,’ another wrote.

‘Vegans is not extreme, this is really extreme!! You are sick!!,’ one user posted.

‘Why the f*** would someone want to eat under a dead hanging corpse,’ one wrote online

‘Would you like it were that your dog hanging there? Your cat? This is some hipster bullshit,’ another person wrote online

‘What a cruel, ugly decoration. A beautiful animal slaughtered,’ someone wrote on Facebook

A petition against the cow was also created, attracting more than 3600 signatures

A petition was created on change.org by a woman in Florida, asking the owners to take down the cow because it created a space ‘for people to get more comfortable with the death and torture of other species’.

The petition has received more than 3600 signatures since it was created.

The restaurant, which was founded in 2012, responded to online criticism in their Facebook post, saying they ‘appreciate all the attention [their] new project is receiving’.

‘Our aim is to create thoughtful conversation,’ they wrote. 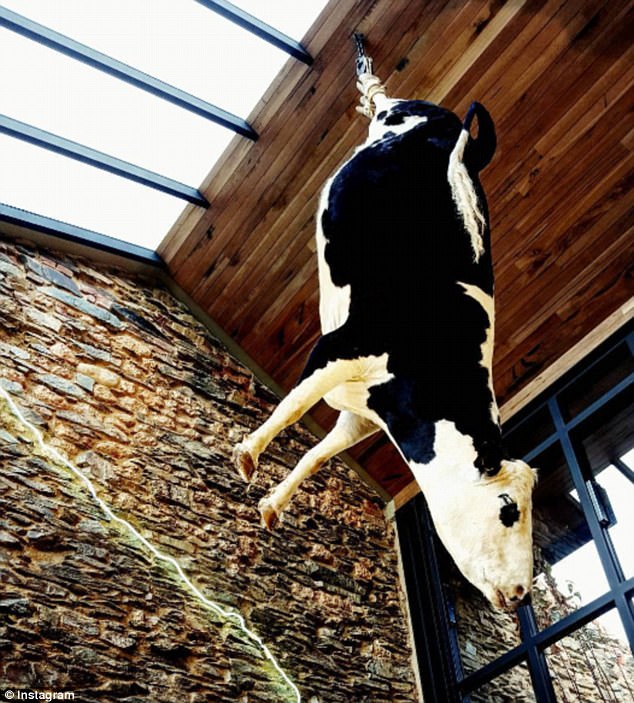 The restaurant responded to online criticism in a Facebook post, saying they ‘appreciate all the attention [their] new project is receiving’

However, some people were in favour of the controversial cow hanging on display saying they were ….

”Sadistic?’ Have you ever been in a slaughterhouse?,’ one person said on Facebook.

‘This place tells you the story of the different stages of growing cattle to feed us. And you can’t miss the message when you walk in and see this above you,’ someone wrote.

Etica wrote that consumers were given an ‘idyllic’ image of farm life where they wanted to share the truth and give consumers an ability to make conscious decisions.

‘As food and dining culture evolves, we should not obscure from where our meal originates,’ they wrote.