A group of vegan activists stormed a Brazilian steakhouse and played sounds of animals being slaughtered to shocked customers.

Demonstrators from Direct Action Everywhere entered Touro Steakhouse in Brighton and waved around signs and placards.

But most of the diners appeared unmoved by the protest and carried on talking and eating, even when the activists played the noise of a cow being killed and shouted ‘It’s not meat, it’s violence’ repeatedly.

The incident was caught on camera and footage begins with protesters quietly walking into the restaurant while customers are eating their steaks.

A group of vegan activists stormed a steakhouse in Brighton, pictured, and played the sounds of cows being slaughtered to the customers 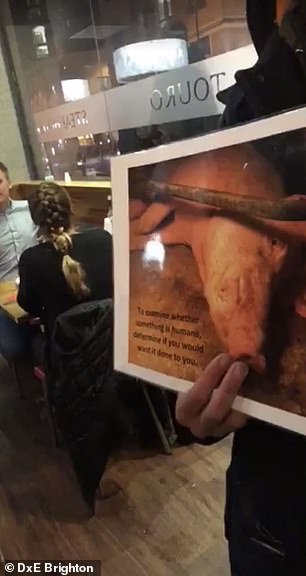 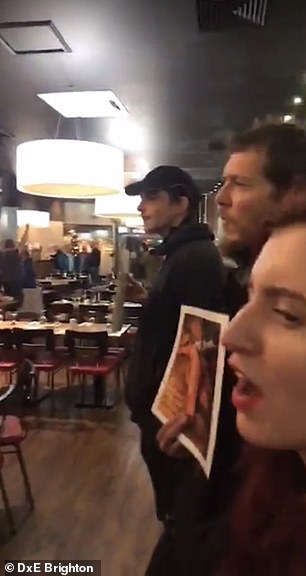 Protesters also waved placards with anti-meat messages, left and right, and remained at the restaurant for around 20 minutes 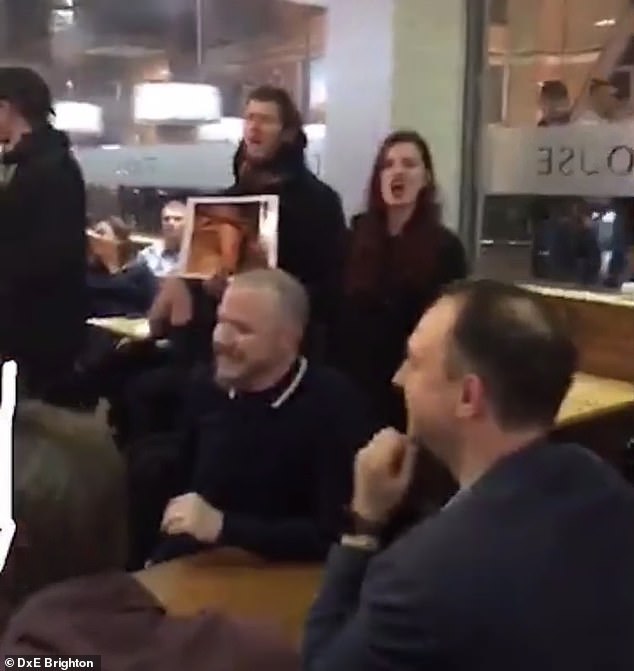 Some customers appeared to be laughing, pictured, as the protest carried on around them 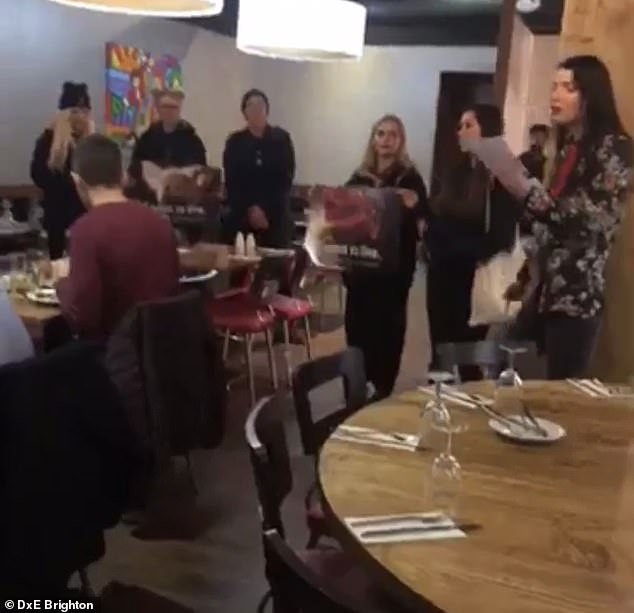 The person filming the video – who is a vegan – can be heard saying: ‘This smells horrible, look at all the flesh.’

But as a spokeswoman attempts to give a speech about the benefits of veganism, patrons can be heard jeering and one mimics a cow mooing.

Waiters are also seen arguing with the demonstrators and trying to get them to leave.

Behind the camera, a voice said: ‘They’re letting us protest but they’re eating the flesh of animals in front of us.’

The protestors remained in the popular steakhouse for 20 minutes before departing to stand outside.

As they left, disgruntled diners are again heard booing, whistling and chanting ‘you’re not singing anymore’ at the departing group. 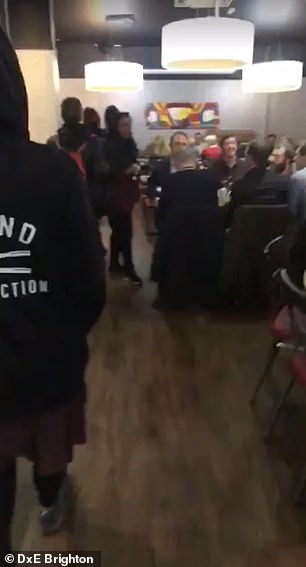 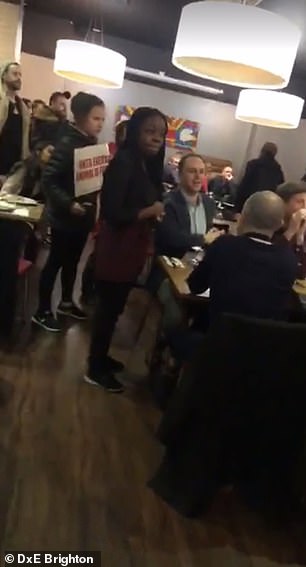 Staff were seen trying to carry on as normal, pictured left and right, as the protesters moved around the restaurant

The group posted about their demonstration on Facebook, pictured, and said they were highlighting the ‘mass killing of innocent animals’ in a ‘public and non violent way’ 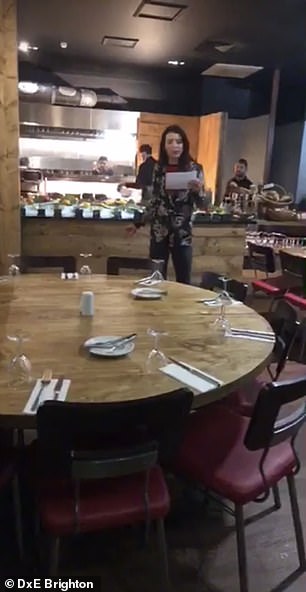 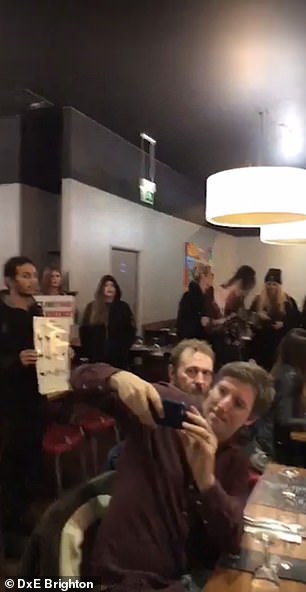 A spokeswoman for the group attempted to make a speech, left, but customers seemed unmoved and more interested in taking pictures and videos of the incident 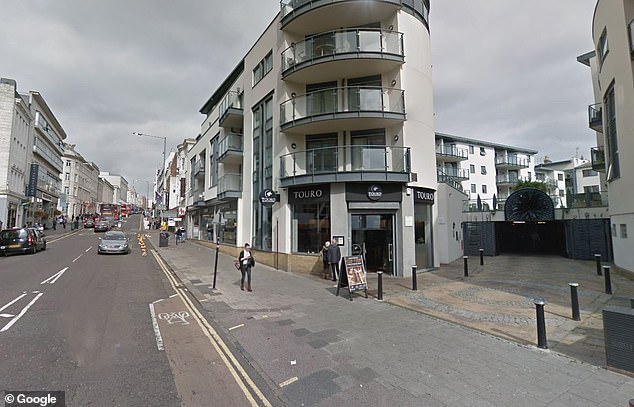 Staff at the steakhouse, pictured, said police were called but did not attend

A spokeswoman for Direct Action Everywhere Brighton said: ‘In a time where we are experiencing mass environmental destruction, largely due to our unsustainable and unethical food choices, it is paramount that we put our egos and selfishness aside and accept that we are all connected, we are all animals.

‘We can no longer ignore the suffering and pain we cause. We are not the only sentient beings that inhabit this planet.’

Madsu Sudan Galtam, manager at Touro, told the Brighton Argus: ‘They came in and started shouting about animals and holding some signs.

‘They didn’t do anything aggressive but it was a bit annoying because it disrupted everyone. We did make a phone call to the police but they never arrived.’ 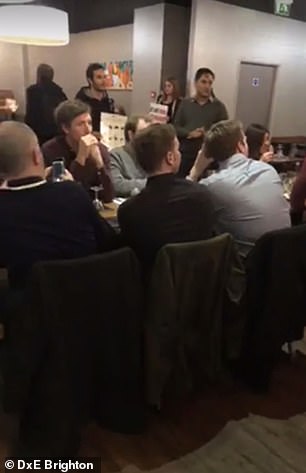 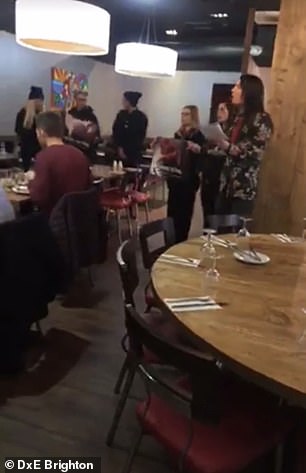 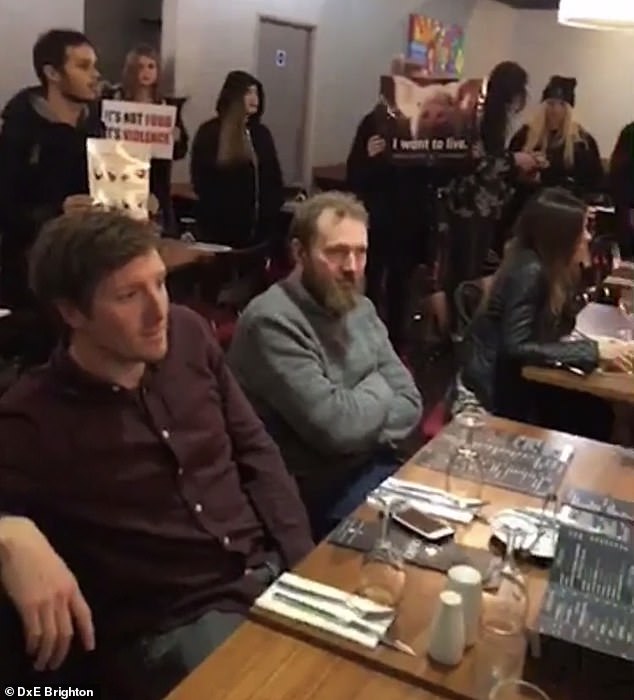 When the group left unimpressed customers, pictured, jeered them and chanted ‘you’re not singing anymore’ 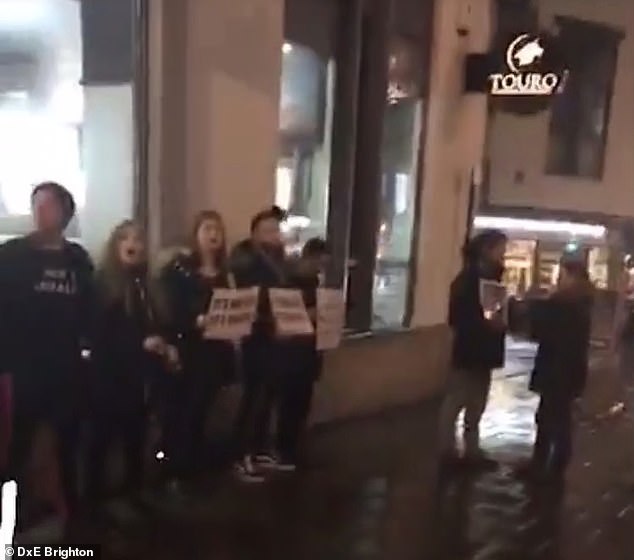 The demonstration continued outside the restaurant, pictured, and the manager said it was ‘annoying’ because it ‘disrupted everyone’ 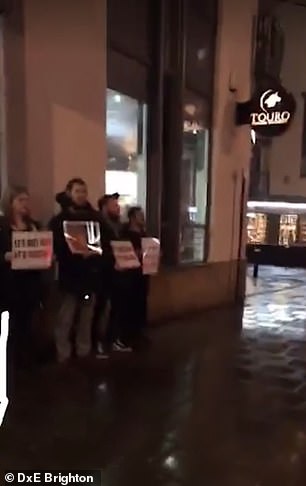 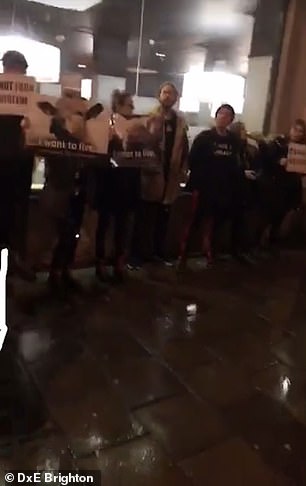 Sussex Police said it attended with community support officers but found the group ‘protesting peacefully’ outside, pictured left and right

Sussex Police said it sent to community support officers to the restaurant but found the demonstrators protesting outside and not committing any offences.

A spokesperson said: ‘We received a report of a protest by a group of 20 people at the Touro steakhouse in West Street, Brighton, on Saturday at 7.10pm. They were said to be animal rights activists.

‘Two police community support officers attended and found the group were protesting outside the restaurant.

‘They were not committing any offences and were allowed the right to peaceful protest.’

Now direct action groups are on the rise as animal liberation activists team up with vegan protestors.

Direct Action Everywhere have protested at a number of restaurants serving meat as well as supermarkets.

The grassroots group, which was founded in the US in 2013, now has five branches across Britain. 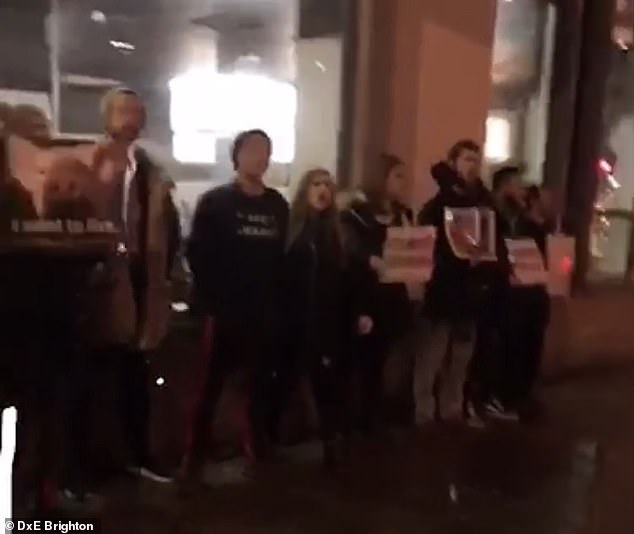 The demonstrators were shouting ‘It’s not meat, it’s violence’ throughout the evening 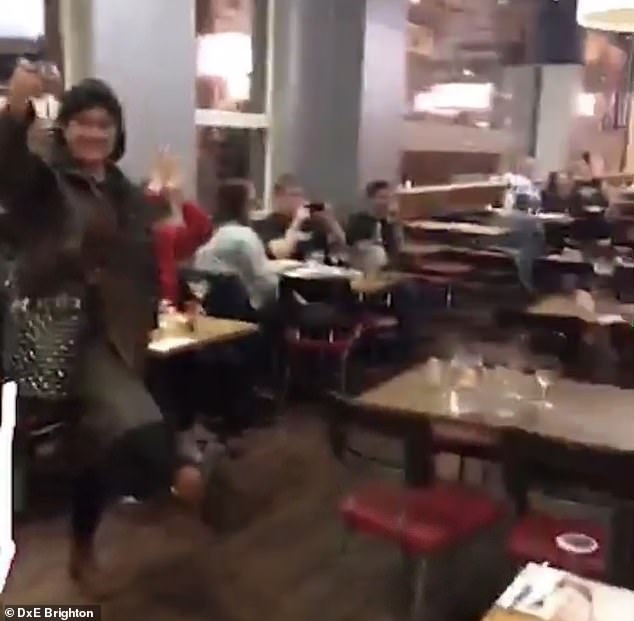