A vegan firefighter has claimed that his human rights were violated when he wasn’t given enough suitable food while fighting a huge wildfire in Canada over a 10-day period.

Adam Knauff, of Ontario, was one of 1,000 firefighters who worked up to 16 hours a day helping to battle a huge forest fire in northern British Columbia back in July 2017.

The 40-year-old, who filed a complaint on Tuesday with the Human Rights Tribunal of Ontario regarding his treatment, was eventually suspended after he blew up at kitchen staff over the lack of vegan food.

Knauff, who had been working as a firefighter with the Ontario Ministry of Natural Resources and Forestry since 2008, had been dispatched out of his usual province to help battle the blaze.

Adam Knauff, 40, says his human rights were violated when he was battling a huge blaze in British Columbia in Canada in 2017 because he wasn’t given adequate vegan food

Despite working non-stop for 16 hours a day for a 10 day stretch, Knauff said he was given ‘inadequate’ options for vegan food and was forced to go hungry.

He ate salad and side dishes on one day and plain bagels and coffee on another. For dinner on one day, he claims his only source of protein was a ‘single black bean’.

‘After working 16-hour days for four days with inadequate nutrition I began to feel physically ill and mentally groggy,’ Knauff wrote in the complaint, according to the Canadian Press.

‘Until that point I had been trying to push through my hunger and exhaustion, sustaining myself on nuts and fruits.’

Knauff said that a week into their firefighting deployment, a barbecue was put on for the crew but the person cooking contaminated the vegan patties with the beef burgers.

He said he was given a warning by his supervisor after swearing at the chef.

‘No one seemed to take my ethical beliefs seriously,’ Knauff said. 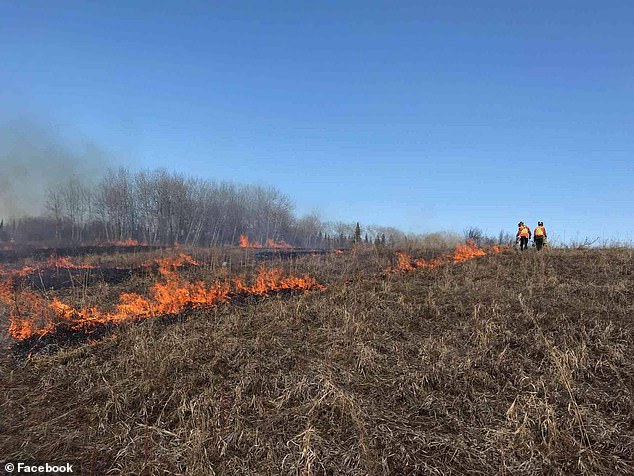 The 40-year-old was one of 1,000 firefighters who worked up to 16 hours a day helping to battle a huge forest fire in northern British Columbia (pictured) back in July 2017

‘I know that I should not have sworn… but I was starving, exhausted, humiliated and defeated,’ he wrote. ‘I had reached my breaking point.’

He was suspended the following day when he poured his lunch out in front of the food staff, saying: ‘This isn’t vegan’.

Knauff was sent home for three days without pay and was banned from fighting fires outside his usual province until the end of 2018.

He said his employer was aware of his longstanding vegan beliefs and that he filled out a standard food information form prior to the trip.

Knauff filed his complaint with the human rights tribunal claiming his employer failed to provide for his ‘sincerely held ethical beliefs’ and his ‘personal commitment to ethical veganism’.

The ministry said Knauff was disciplined for his ‘inappropriate, insubordinate, unprofessional and aggressive behavior’.

They also claim that the firefighter three non-vegan food at staff.

Knauff’s employer argued that while his ‘vegan status is a sincerely held lifestyle choice’, it does not meet the legal definition of creed under Ontario’s Human Rights Code.