LAS VEGAS (AP) – Police in Las Vegas have changed use-of-force policies to stop routine use of neck restraints that render people unconscious after the death of a man and findings that a department-taught technique was used 632 times over a decade, officials said Thursday.

The revision to the use-of-force rules followed the death in May of Tashii Brown outside a casino. But Clark County Sheriff Joe Lombardo called it part of ongoing efforts to improve tactics, not a direct result of the death, lawsuits or involuntary manslaughter case against Officer Kenneth Lopera.

“It would be ethically irresponsible not to constantly evaluate and upgrade when possible,” the sheriff said.

Sgt. Esmeralda Boveda of the Las Vegas police department speaks during a news conference Thursday, Sept. 21, 2017, in Las Vegas. Las Vegas police officers can no longer routinely use neck restraints to render combative people unconscious, but can still use the department-approved technique in a life-or-death struggle.(AP Photo/John Locher)

Brown, 40, died from what department officials called an unapproved chokehold after Lopera chased him from a Las Vegas Strip casino.

An autopsy found that Brown, who also used the name Tashii Farmer, was intoxicated by methamphetamine and had an enlarged heart. But the coroner ruled his death was from asphyxiation due to the neck restraint.

Police officials said Lopera, 31, violated department policies by using a stun gun seven times, repeatedly punching Brown in the head and neck, and then restraining him from behind for more than a minute with a mixed martial arts move they said Lopera described to a colleague as a “rear naked choke.”

Lopera’s legal representatives maintain that he used a department-approved technique and did nothing wrong.

Brown’s mother, Trinita Farmer, and her lawyer, Andre Lagomarsino, said they don’t believe officers should ever choke someone.

“I don’t think police should have their hands around your neck,” Farmer said before breaking into sobs. “They have guns. Why should you choke somebody to death?”

Lombardo said Thursday the department that polices an area with 2 million residents and 40 million tourists a year had for several years been comparing its use of the approved arm-around-the-neck technique, called lateral vascular neck restraint, with techniques used by other departments around the nation.

Las Vegas police, by comparison, reported using the technique 274 times during the same five-year period – an average of more than once a week.

The revised policy, which went into effect Sept. 15, still allows officers to use the department-taught technique. But it is no longer classified as a low-level use of force.

The classification as “intermediate” or “lethal” force means officers have to prove to supervisors that whoever it was used on intended to harm officers or others, according to a department statement.

The American Civil Liberties Union of Nevada and the local chapter of the NAACP had called for Las Vegas police to ban neck restraints entirely.

The ACLU issued a statement Thursday crediting the department with appropriately reclassifying the tactic among use-of-force rules.

Roxann McCoy, Las Vegas NAACP president, said she appreciated that the department recognized made changes in the neck restraint policy.

“I believe it should only be used in a life or death situation,” McCoy said. 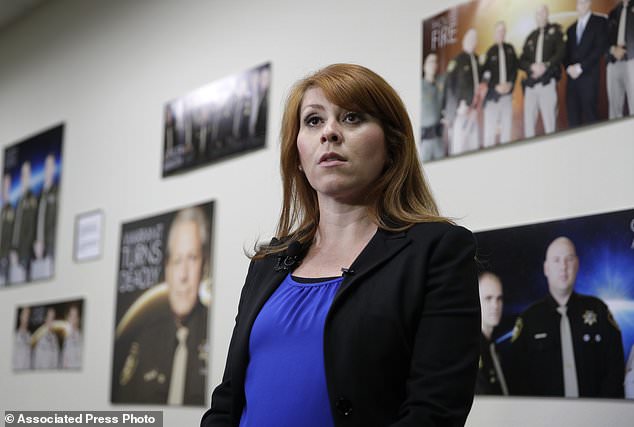 Sgt. Esmeralda Boveda of the Las Vegas police department speaks during a news conference Thursday, Sept. 21, 2017, in Las Vegas. Las Vegas police officers can no longer routinely use neck restraints to render combative people unconscious, but can still use the department-approved technique in a life-or-death struggle.(AP Photo/John Locher) 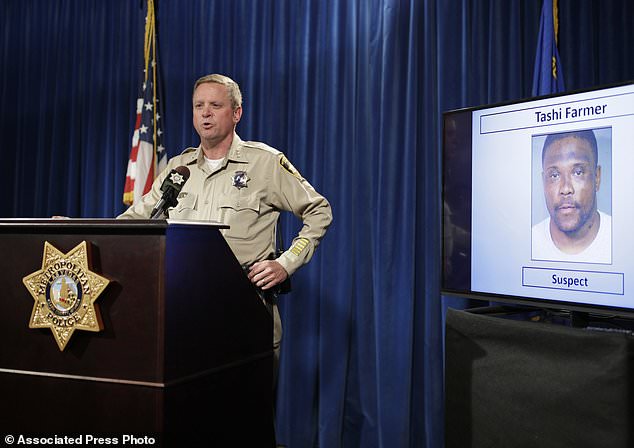 FILE – In this May 17, 2017, file photo, Las Vegas police Undersheriff Kevin McMahill speaks during a news conference in Las Vegas. Police officers can no longer routinely use neck restraints to render combative people unconscious, but can still use the department-approved technique in a life-or-death struggle. A change announced Thursday, Sept. 21, 2017, in the department’s use-of-force policy aims to reduce the number of times officers use an arm-around-the-neck method the department calls “lateral vascular neck restraint.” It comes almost four months after the death of Tashii S. Brown, known as Tashii Farmer-Brown, a 40-year-old man who was chased by an officer out of a Las Vegas Strip casino and subdued with a stun gun and a chokehold that department officials say was not approved. (AP Photo/John Locher, File)