Venezuela 0-0 Peru: Christofer Gonzales and Jefferson Farfan have goals ruled out by VAR

Venezuela 0-0 Peru: Christofer Gonzales and Jefferson Farfan have goals ruled out by VAR before Luis Mago sees red late on

Venezuela and Peru began their Copa America with a nervous draw on Saturday in a match marked by two Peruvian goals chalked off after consultation with the Video Assistant Referee.

Christofer Gonzales’ 11th-minute goal was disallowed for offside earlier in the move and then Jefferson Farfan suffered the same fate 19 minutes into the second half after his header hit the net.

The game grew more tense after Venezuela had Luis Mago sent off with 16 minutes remaining.

Peru were unfortunate not to sneak all three points, with Venezuelan goalkeeper Wuilker Farinez making a superb reflex save to scoop the ball off the line in the closing minutes of the match.

‘We are a bit upset because we think we deserved to win,’ said Peruvian captain Paulo Guerrero.

‘We just couldn’t find the last ball. We did what we could. All we lacked was a goal.’ 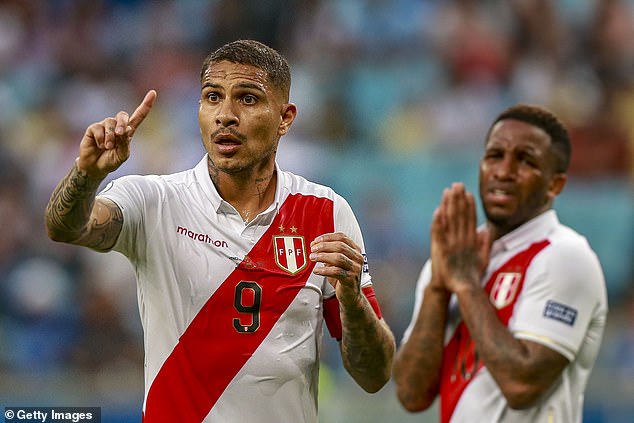 The first half was a stop-start affair but things improved in the second period as Peru imposed themselves on their opponents, one of only two South American sides never to win the Copa America.

The draw means both sides are tied in second place in Group A, behind host nation Brazil, who beat Bolivia 3-0 in the tournament’s opening match on Friday.

Peru now face Bolivia on Tuesday in the second round of matches and Brazil take on Venezuela the same day. 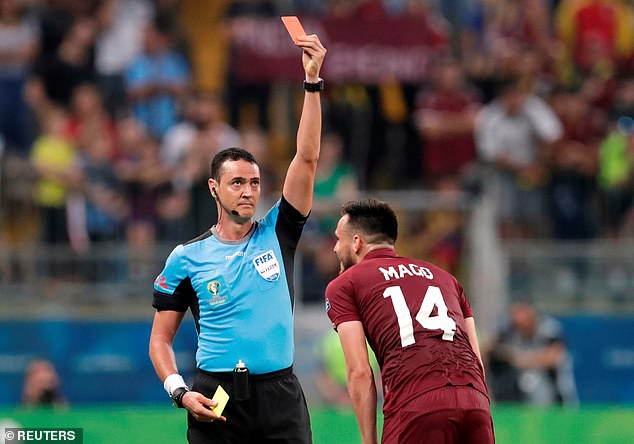