Venezuelan cyclist tries to ride through stream but it goes wrong

This is the disastrous moment a cyclist was thrown over his handlebars after his attempt to race over a stream.

His helmet was destroyed after the stunt in La Victoria, Venezuela, went wrong and left him with blood pouring from a large lump in his head.

The shocking footage shows him hit what appears to be a drop in the earth underneath the water, unseen by the sports enthusiasts.

Blood is seen streaming down the cyclist’s face as the top of his helmet is left flapping from his head.

As he sits on the floor dazed, his battered helmet is removed to reveal a huge lump, with a pierced centre pumping out blood. 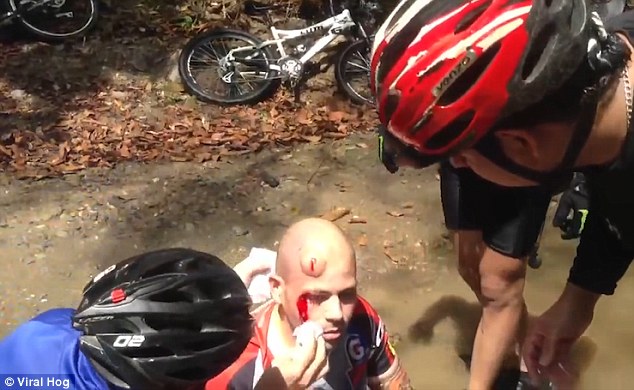 A huge lump is left on the cyclist’s head, with blood streaming from the centre as his eye also appears to be injured

Footage of the accident emerged online yesterday, with a caption from one of the group describing how the friends had to get back on their bicycles and find help.

‘We were on a day trip and we stopped to go through that little river,’ it read. ‘It seemed fun to record us while we were passing and then the accident happened.

‘As we were not near the city, we had to pedal for a while until I reached the road so we could ask for help.’