Karen Clifton has the kind of megawatt smile that lights up a room and a deep, throaty laugh. While posing for our photo shoot, the Strictly Come Dancing star is full of grins and giggles as she bops around to the Spice Girls soundtrack she’s brought with her.

She’s trying very hard to be happy and positive, she admits. But it’s difficult when her marriage, which she thought would last forever, is apparently over.

The romance between Karen and fellow Strictly dancer Kevin Clifton seemed like a fairy tale. Karen’s been on the show for six years and took celebrity partner Mark Wright into fourth place.

Kevin’s become one of Strictly’s most popular dancers since joining in 2013 and is the only professional to have taken four consecutive partners – Susanna Reid, Frankie Bridge, Kellie Bright and Louise Redknapp – to the final.

The public fell in love with the unlikely romance of the lad from Grimsby and his exotic, New York-raised Venezuelan wife.

Strictly star Karen Clifton (pictured), 36, discusses working and living with Kevin Clifton, 35, following the announcement of their separation after nearly 3 years of marriage

But last month, after less than three years of marriage and following weeks of speculation about the state of their relationship, they announced they were separating.

‘We’re just a normal couple and things like this just happen in life,’ says Karen, 36. ‘We both have a lot of love for each other and that won’t end. We want this experience to be positive. It shouldn’t be that when you break up you have to end everything and never talk again.’

As it is, there’s no escaping each other; they are entwined professionally far tighter than any tango hold.

They run a dance school together and are about to tour with a show that’s been in the works for almost a year. An intense two months together on the road? ‘Awkward’ doesn’t cover it.

‘A lot of couples feel really bad in their relationship,’ says Karen. ‘We’re focusing on being in a good place. We’re still supporting each other, we’re happy now in our own spaces. He’ll always be in my life; he’s never getting rid of me. We’re really good friends and we’ll continue working together and being there for each other. That means everything to us.’

Questions about the health of their marriage started in August last year when Karen admitted that fights over things like who took the bins out would end up with her sleeping on the sofa. Then fans noticed during Strictly they were no longer dancing together, and rumours surfaced that they weren’t on speaking terms.

When Kevin, 35, and his latest celebrity partner, comedian Susan Calman, were eliminated in November he apologised publicly to Karen on screen, saying, ‘When Strictly’s on, I’m not the easiest person to live with, I go a bit mad.

So I’d like to say thanks to my wife for putting up with me.’ But the next month Karen was accused of having a short fling with accountant Stuart Wood, eight years her junior.

Karen refuses to talk about the alleged affair. But she insists no one else was involved in the breakdown of the marriage.

‘We both take responsibility. We don’t blame each other.’ She also says that when it comes to getting wrapped up in the show, they are as bad as each other. ‘It’s always intense,’ she says. 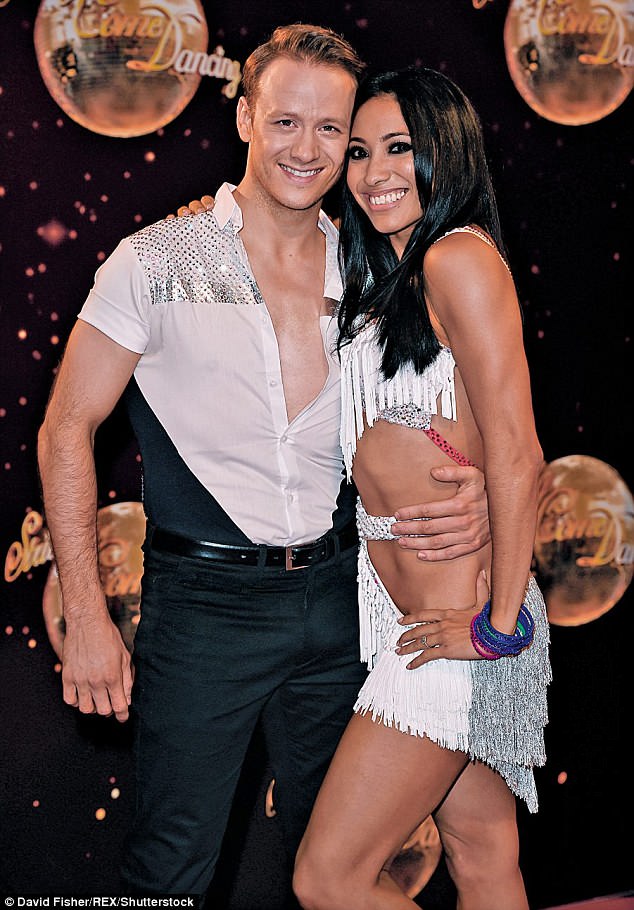 ‘You have to get the best out of your celebrity to make the show good. You train for ten to 12 hours a day and then just want to sleep. But it’s always been like that.’

So, what did go wrong? Karen sighs sadly. ‘Like all couples, you argue, you make up, you cook, you clean, you wash clothes. And then, like some couples, you realise it’s not working.

For us, I think we got so busy, we were getting on with our careers and focusing on so many things that we sometimes forgot about each other a little bit.

‘I can’t pinpoint a time or a place. It’s just something that happened. Sometimes you don’t know until it hits you in the face. When you notice it’s broken, it’s too late.

You try to salvage it but sometimes you have to give it a break for a little bit. You have to take a step back, take some time to breathe, collect your thoughts and then talk about it.’

By now tears are swimming in her eyes, despite the smile she’s trying to force onto her face. ‘It’s one of those things. I think we only realised it was in trouble when it had already stopped working.’

Karen is still wearing her wedding ring and has no plans to change her surname. Neither she nor Kevin has moved out of the south London home they share – though he has been spending lots of time with his family in Grimsby. 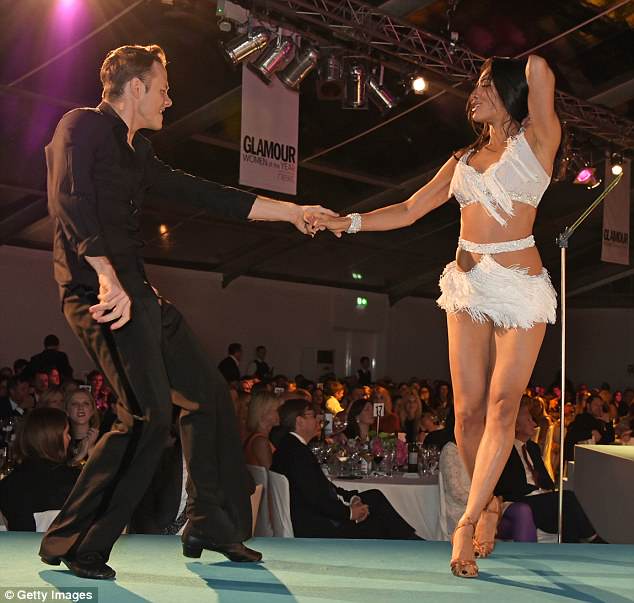 Both have been divorced before – Karen from school sweetheart and fellow dancer Matthew Hauer; Kevin twice, both his previous wives also having been dancers – but, for the moment, Karen isn’t thinking about divorcing for a second time. ‘We’re not getting divorced now,’ she says pointedly.

In fact, the more we chat, the more it’s clear she hopes the marriage can be salvaged. ‘It’s important to be open to all possibilities,’ she says. ‘I haven’t given up on it. I saw my parents break up and I didn’t like it.

I think the best thing for now is to behave like adults and take a break. He can go his way, take care of what needs to be taken care of, and I’ll do the same. You never know what’ll happen; maybe even in a couple of years… It’s just that right now this is what we need.’ 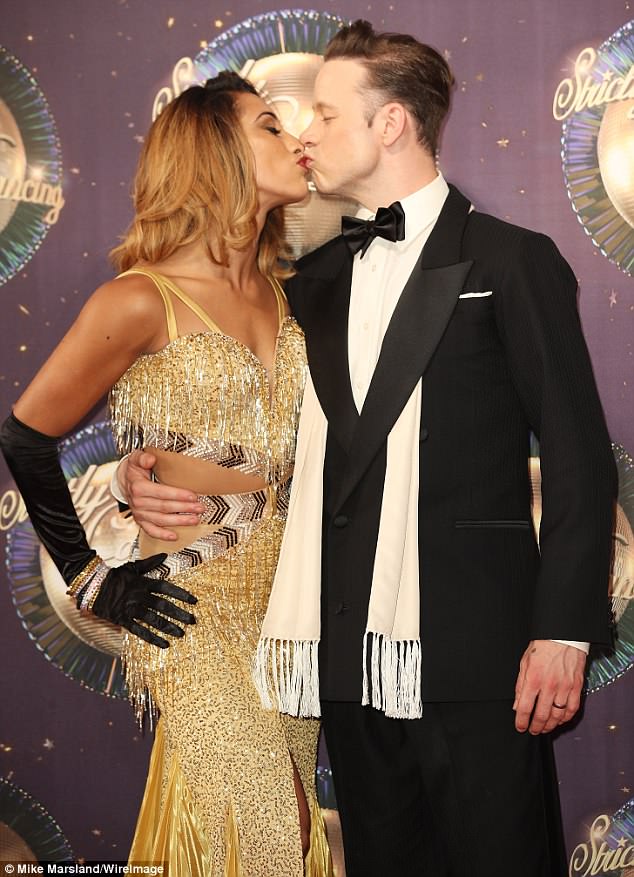 When I mention how Kevin once told me that Len Goodman had teased him for ‘punching above your weight’ with Karen, she laughs.

‘Opposites attract. And I love his pale colouring; he’s like a god – from Grimsby. We were both totally different, from different worlds, but none of that mattered.’

Their decision to split came after a whirlwind year when they hardly saw each other. During Strictly Kevin was mainly based in Scotland, where his dance partner Susan Calman lives, while Karen was in Manchester to practise with her partner, chef Simon Rimmer. After the series ended, Kevin went straight on the Strictly tour.

‘It took us a while to sit down and be truthful about how we were feeling,’ she says. ‘Right now, he’s great and I feel OK, and when we’re together we’re OK. We’re still best friends.’ 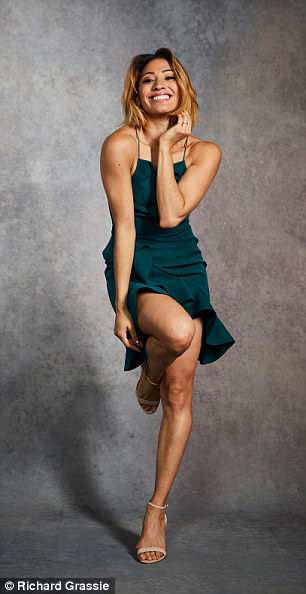 She believes that by admitting their problems, it meant they could start healing them in time for their big tour together.

‘We wanted to tell the truth to our friends and fans. We didn’t want to feel trapped in a lie. And I think it’s helped us. Mentally and physically this has taken a big toll on us, and to be able to do a tour we needed to be strong.

‘In a strange way it’s been a bit like therapy. You release and you let go and you start healing from there. Now we feel inspired and energised. We’re still passionate about what we do.’

Performing in her own show is a dream Karen’s had for most of her life. Born in Venezuela, she, her mother and her two siblings moved to New York when she was eight after her parents split up.

She studied dance there and met Kevin when they both appeared in Broadway show Burn The Floor and became friends.

Kevin moved back to the UK but when Burn The Floor went to the West End in 2010 they were both in the show and fell in love.

Kevin proposed to Karen three years later at the end of a performance.

Their nationwide tour, Kevin And Karen Dance, which starts on 22 May, follows a successful show of the same name last year.

‘We never even thought about not doing the tour,’ she says. ‘It’s really important to us. We share a love of storytelling and are showing all our different inspirations – from Liza Minnelli to Beyoncé, from Barbra Streisand to Michael Jackson. It’s exciting.

‘We performed together at a show at the weekend and the chemistry was still there. I think it was emotional for everyone watching it because they knew what was going on with us. Dancing’s always been the glue that keeps us together, and that’ll never change.’

Karen and Kevin begin their 2018 tour of 37 venues across the UK & Ireland on 22 May. Tickets and venues are available at kevinandkarenlive.com.