A Venezuelan woman living in Miami who says she was ‘drugged and raped’ claims police treated her like a liar and told her she should have ‘fought back’ – insisting that they refused to take her case seriously because she is an immigrant.

Veronica Victoria Perasso, 22, was living the high-life in Florida in July 2018 when she says she was attacked and raped by a man she was hanging out with – in a horrific assault that she believes was set up by a woman she was living with.

‘On July 2nd 2018 I was drugged, raped, and sexually assaulted,’ she told Jam Press. ‘A girl who I lived with at the time took me to a house where I was assaulted.

Speaking out: Venezuelan-born influencer Veronica Victoria Perasso, 22, says she was drugged and raped in July 2018 – and claims police refused to believe her 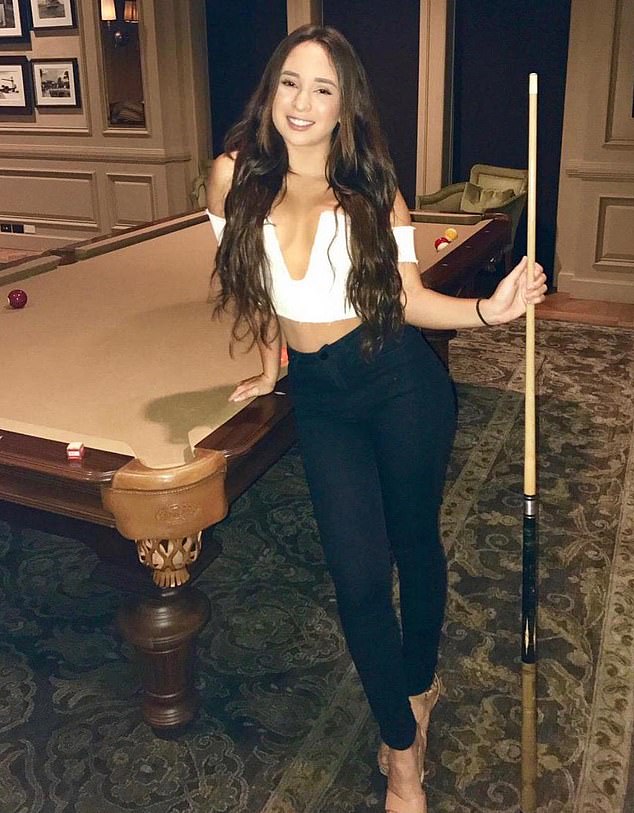 Discrimination? Veronica, who lives in Miami, believes that officers accused her of lying because she is an immigrant woman 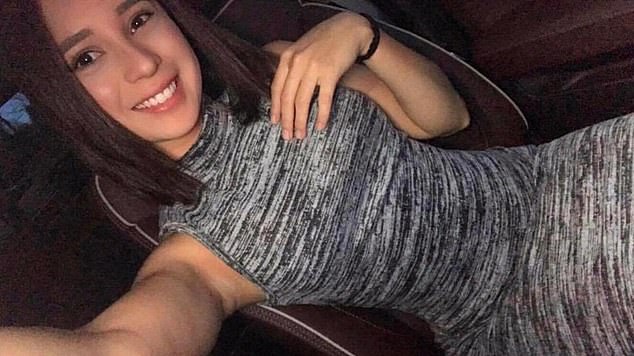 Upset: ‘The police treated me like I was inconveniencing them by reporting it,’ the Florida-based influencer said

‘Afterwards, she took me home and put me in bed and acted like she didn’t know what happened.’

Veronica claims the woman even videoed her after she had been drugged, revealing that she was seen on camera incoherently asking for her boyfriend.

The next day Veronica awoke with unpleasant memories and a nauseous disgusted feeling inside her.

‘I woke up, went straight to the hospital and got a rape kit,’ she recalled.

‘They confirmed that someone was inside of me without protection and when I told them it was absolutely against my will they instructed me to call the police. Which I did.’

Sadly, Veronica did not get the response she was hoping for from law enforcement officials.

‘The police treated me like I was inconveniencing them by reporting it,’ the Florida-based influencer said.

‘They asked me why I didn’t physically fight back. I explained I was incoherent and had no strength.’ 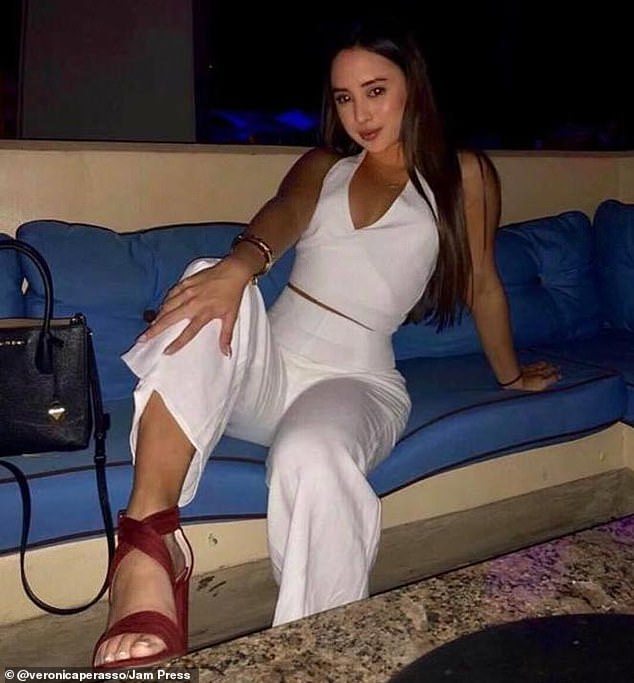 Shocking: Veronica says that police asked her why she didn’t ‘fight back’ against her attacker – despite the fact that she was drugged 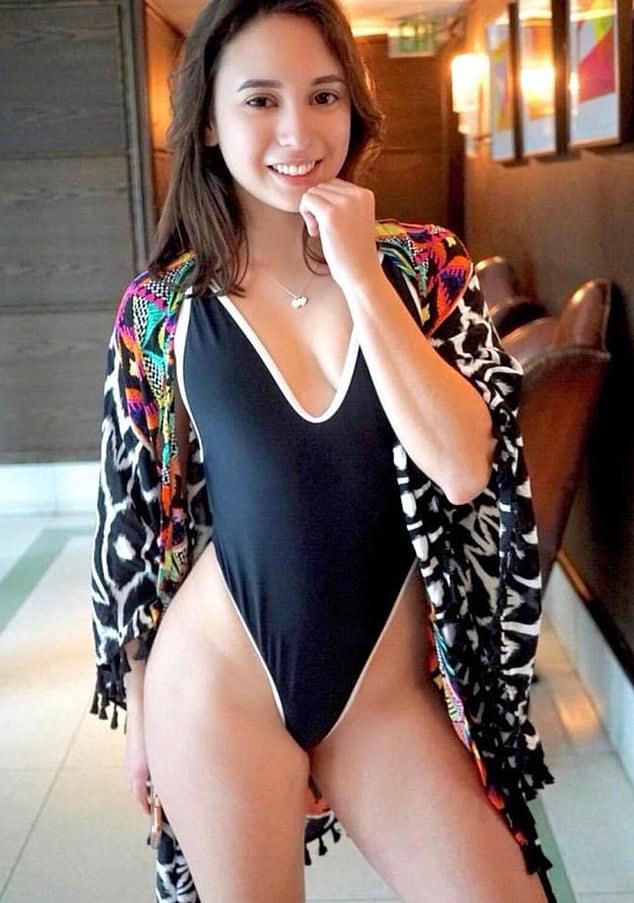 Outrage: ‘My word meant nothing, as a young immigrant female in America,’ she said

Officers asked Veronica whether she knew the man who had attacked her – and while she couldn’t identify him, she told them that she knew the woman who had taken her to the house where she was assaulted.

‘They asked me if I knew the person, and I said I knew someone who did – the girl that took me there – and they questioned her, even though she didn’t want to be involved,’ Veronica explained.

‘She was an accomplice and she knew it. She begged me not to continue talking to police – it turned out she was regularly extorting men and women for money.

‘I was so young and impressionable.’

But while Veronica is angry at the woman who she says delivered her to her rapist, what rankles most for her is that the cops failed to act – particularly because she believes that their suspicious response to her came as a direct result of her Venezuelan background.

‘The police insisted I could only get justice if I got a confession – that is, if I got the guy to admit he raped me, willingly, on tape,’ Veronica explained.

‘My word meant nothing, as a young immigrant female in America.’

Veronica was doubly shocked, she says, because the #MeToo movement was in full swing at the time of her attack.

‘I found it confusing that on TV politicians and powerful businessmen were being taken down by women who claim they were sexually assaulted 20 and 30 years ago, with no proof, only their word,’ she said.

‘Yet here I am, today, in the flesh, with lots of proof, not even being heard because I’m an immigrant and the person who raped me was not famous.’

Although furious and frustrated, Veronica refused to let the situation get her down. 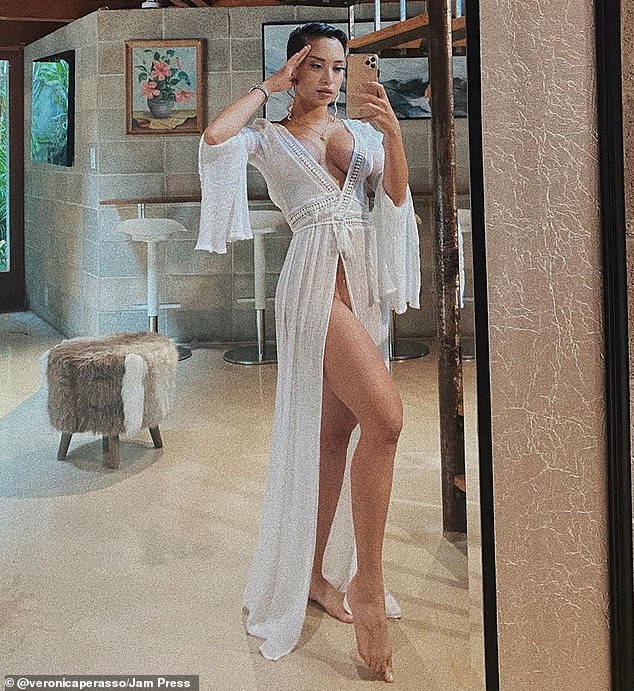 Transformation: After reporting the rape and being treated like a liar by police, Veronica was inspired to completely change her look – explaining that she wanted to ‘become someone else’ 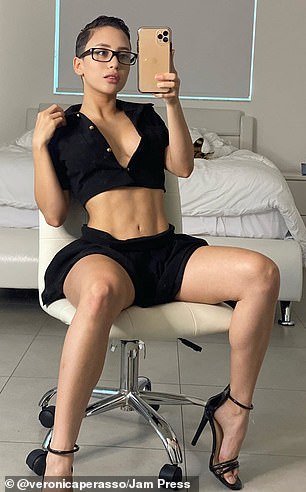 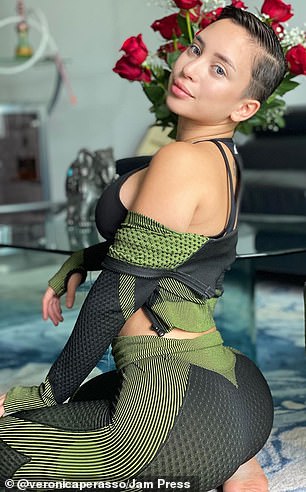 Changes: The influencer cut off her hair, got breast implants, and got several tattoos – while also embracing a much tougher persona 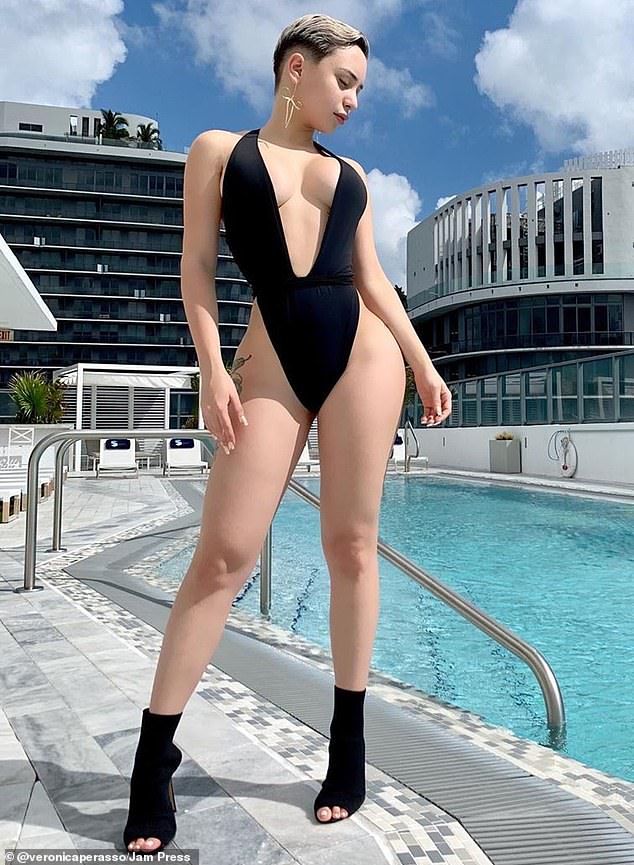 Success: Veronica started showing off her new look on Instagram – where she quickly amassed a legion of followers thanks to her overtly-sexualized content

‘I left Florida at that point,’ she remembers, ‘And set out to change everything about myself.

‘I had to become someone else; so first I got extensions, then colored contacts.

‘Then I got breast implants, tattoos, then the extensions got taken out and the hair kept getting shorter and shorter until one day I woke up staring in the mirror at a completely new version of myself.’

As it happened, the horrific attack motivated Veronica to tap into a mental toughness that she never knew she had – and inspired her to push forward and transform her life.

‘This new me was edgier, with fewer f***s to give and more drive than ever,’ Veronica revealed, explaining that she began showing off that mentality on social media, where she quickly built up a legion of followers thanks to her overtly sexual content and cavalier attitude.

And even now, her tough model persona, complete with sassy close-cropped hairdo, does very well with her army of online fans.

In fact, Veronica says she is currently earning several hundred thousand dollars a month as an influencer and model – having racked up an impressive 1.4 million followers on Instagram.

‘I love to have fun, and joke around on my page,’ Veronica said.

‘And I receive a huge amount of positivity (and money) from my fans – which is nice!

‘I’m aware I play into the South Beach Latina look, with the big boobies and round perky booty,’ she confessed.

‘I have a 21 inch waist and 35 inch hips – and while I am introverted and I do have intellectual depth, I am very sexualized online.’ 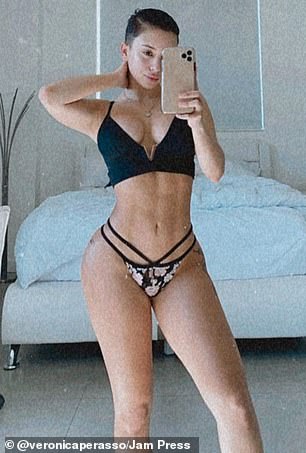 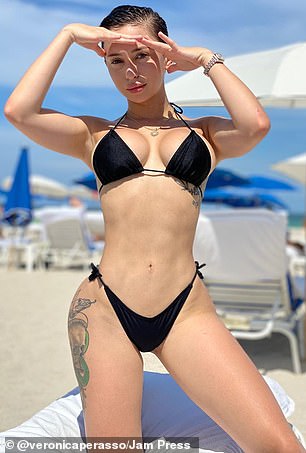 Money maker: The influencer says she makes hundreds of thousands of dollars a month from her modeling work and online following 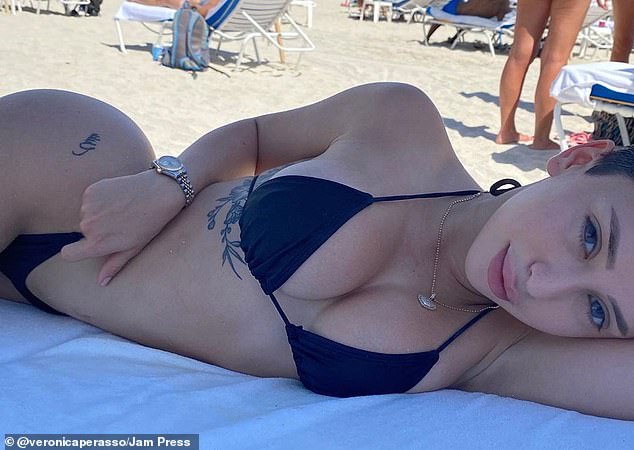 Support: Veronica hopes that sharing her story will help other women who find themselves in similar situations

Comfortable now with her domestic situation – ‘I like spending money on friends and family, and my cat, who has recently cost me $6,000 in vet bills alone’ – Veronica loves the simple pleasures.

‘When I’m not working I’m in sweatpants, no makeup, lounging around eating playing with my cat and watching TV,’ she said.

‘Although I am acquiring a serious lingerie addiction.’

Nowadays Veronica gets lots of support from her fans – with the odd crazy request now and again.

‘Somebody not long ago asked for pictures of my armpits,’ she remembers. ‘And I made that fantasy come true for them.’

Jokes aside however, Veronica hopes her story resonates and can help others, particularly right now.

‘I think with what’s going on with police brutality in the United States right now, this is the perfect time to highlight that cops aren’t just abusing people physically,’ she said.

‘They are emotionally abusing people and ignoring the safety and rights of women in situations like this.

‘I just hope I can use my platform to help bring attention to this matter not just for my own vindication but for any girl who has had a similar experience to me to let her know that she is not alone. If you are a female and have heard my story and need to vent, reach out to me! ‘

Jam Press contacted West Palm Beach Police who refused to comment as this is an ongoing case.