Brad Pitt’s allies say vengeful Angelina Jolie is mounting a ‘disinformation’ campaign against the actor by using their ongoing business dispute to dredge up her claims of domestic violence.

Sources close to the Once Upon a Time in Hollywood star, 58, say he’s saddened – but not shocked – that Jolie has once again publicly accused him of terrorizing their kids on a 2016 private jet ride.

Jolie, 47, pressed authorities to investigate the mid-flight bust-up that led to the Hollywood couple’s divorce but the FBI decided not to pursue criminal charges.

That hasn’t prevented her from weaponizing the ‘ever-evolving’ allegations at every possible opportunity, according to Pitt’s pals, who have slammed the Tomb Raider actress for repeating them yet again this past week – this time in a dispute over a French winery, Miraval.

They also accuse Jolie of hypocrisy for complaining about Pitt’s request for a Non-disclosure agreement (NDA) while privately proposing the exact same thing to Pitt’s lawyers in separate divorce negotiations. 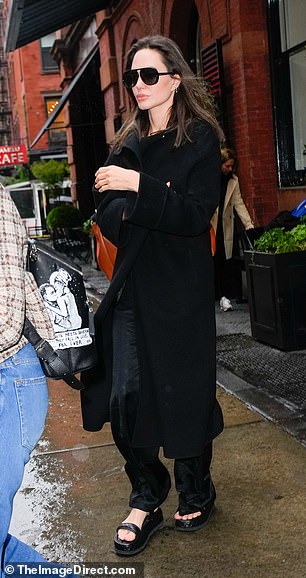 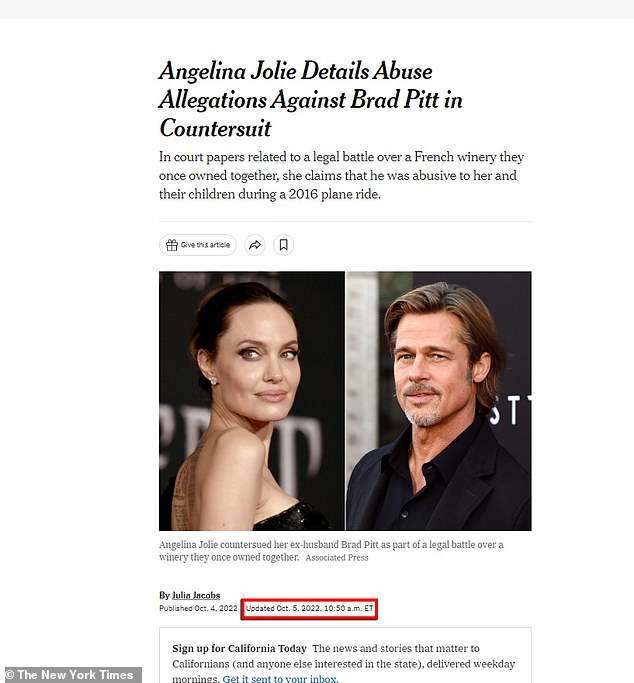 Jolie’s latest potshot was reported breathlessly by the New York Times Tuesday only for the paper to quietly amend the article Wednesday morning to reflect that ironically Jolie had proposed a non-disparagement proposal to Pitt’s divorce lawyer, Anne Kiley

The former couple – once known as Brangelina – are locked in a protracted legal battle over the celebrated Chateau Miraval business they jointly owned before Jolie ‘secretly’ offloaded her half to a ‘Russian oligarch’ in 2021.

Responding to Pitt’s claims she had no right to sell, Jolie’s latest filing counters with a lengthy account of the incident on board a flight from France to California that triggered the breakdown of their five-year marriage and joint business ventures.

Jolie’s filing claims Pitt flew into a rage, grabbing her by the head, shaking her, and shoving her into a bathroom wall before punching the ceiling numerous times.

When one of their six kids, then-aged between eight and 15, came to their mom’s defense, the two-time Oscar-winner is alleged to have ‘lunged at his own child’, prompting Jolie to grab him from behind.

‘To get Jolie off his back, Pitt threw himself backwards into the airplane’s seats injuring Jolie’s back and elbow,’ the countersuit states.

‘The children rushed in and all bravely tried to protect each other. Before it was over, Pitt choked one of the children and struck another in the face,’ she claimed.

But sources close to Brad are fighting back.

Brad’s lawyer Anne Kiley told DailyMail.com: ‘Brad has owned everything he’s responsible for from day one – unlike the other side – but he’s not going to own anything he didn’t do.’

‘He has been on the receiving end of every type of personal attack and misrepresentation. Thankfully, the various public authorities the other side has tried to use against him over the past six years have made their own independent decisions.

‘Brad will continue to respond in court as he has consistently done.’ 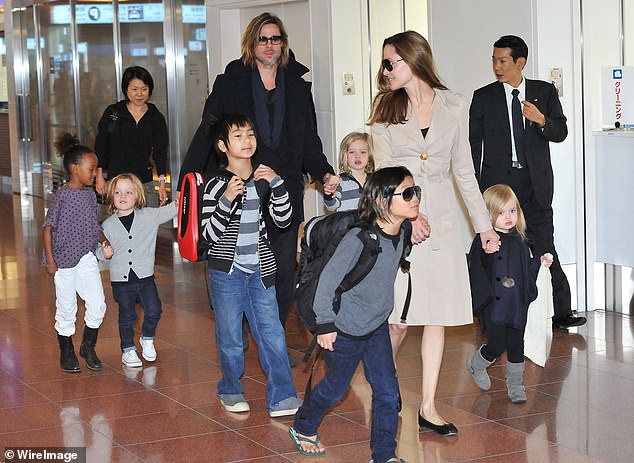 Angelina Jolie and Brad Pitt are pictured in November 2008 with their six children. The couple separated in 2016, following an explosive row on a private jet. On Tuesday, Jolie detailed in court documents the circumstances of the violent altercation again 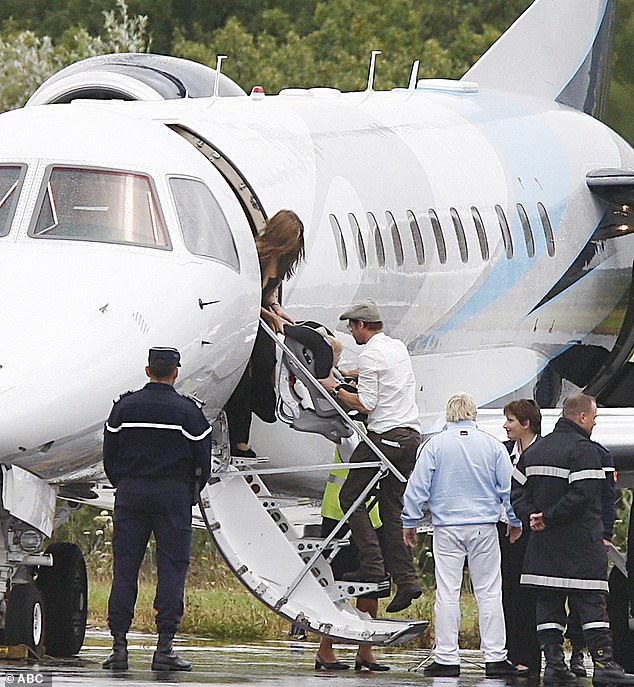 The former couple are pictured at Brie-Champniers airport in France as they board a private jet in 2007, the year before they bought the Miraval property

The FBI and reportedly the Los Angeles Department of Children and Family Services both declined to take further action against him in the wake of the spat.

Sources close to the actor point out that a judge listened to Jolie’s accusations during their months-long, closed-doors child custody battle which involved doctors, therapists and child services professionals.

Judge John Ouderkirk rejected the notion Pitt was an unfit father by awarding him joint custody in May 2021, although Jolie later succeeded in having the judge disqualified over his business relationships with Pitt’s attorneys.

One insider told DailyMail.com: ‘The FBI concluded there was no basis for charges and the judge effectively sided with Brad because he would not award joint custody if he felt a father was a danger to his children.

‘Quite what an argument onboard a private plane in 2016 has to do with a property dispute involving a 19th century French chateau is anybody’s guess.

‘This is just about Jolie trying to rehash everything and tear Brad down at every opportunity. Her story continues to evolve every time she tells it.’

The abuse allegations resurfaced in April of this year when a mystery ‘Jane Doe’ sued the FBI for files connected to ‘an incident of domestic violence that occurred several years ago involving plaintiff and minor children as victims and witnesses.’

That episode took place on board a private jet and bore numerous similarities to the Pitt-Jolie dust-up, according to NBC news, prompting intense speculation that Jolie was the Doe.

The suit, filed under Freedom of Information law, is intended to ‘better understand the FBI’s investigation and obtain information necessary for her children to receive medical care and trauma counseling.’ 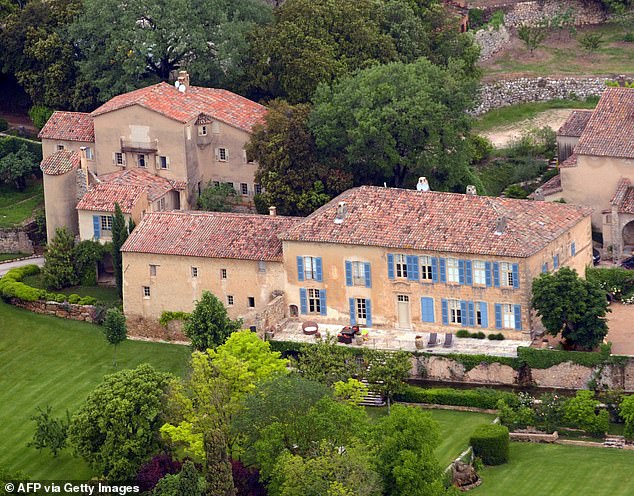 The latest Brangelina skirmish involves Chateau Miraval, a 35-room estate and celebrated vineyard in the south of France that Pitt and Jolie bought for $60 million in 2011. The 1,000-acre estate – now valued at $164M – is where the couple tied the knot in 2014 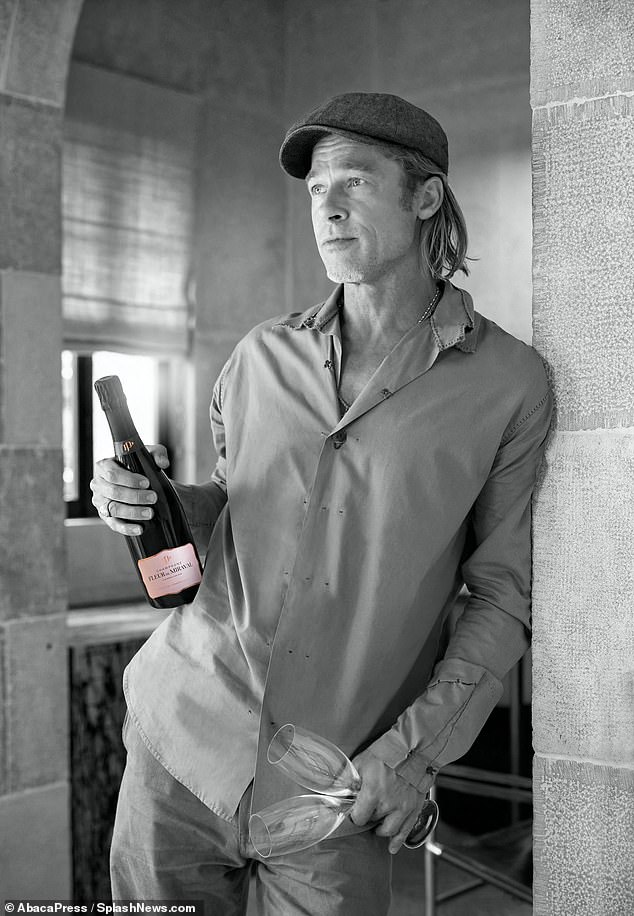 Jolie’s former company’s suit says that she wanted to sell her half of the Miraval business to him when they split, but Pitt allegedly tried to add gag clauses about their fights in the contract

Pitt and Jolie were ruled legally single in 2019 – but are still sorting out their labyrinthine financial affairs and custody arrangements to this day.

The latest skirmish involves Chateau Miraval, a 35-room estate and celebrated vineyard in the south of France that Pitt and Jolie bought for $60 million in 2011.

‘Through text messages sent in January 2022, Shefler made various threats against Pitt,’ the suit adds.

‘Even after Pitt’s counsel advised Shefler’s counsel that all communications must go through counsel, Shefler has continued to personally message Pitt.’

Responding to the suit filed in Los Angeles County, Jolie claims she was ‘growing increasingly uncomfortable with continuing to participate in an alcohol-related business, given the impact of Pitt’s acknowledged problem of alcohol abuse on their family.’

‘Resigned that Pitt would not share control of the winery or distribute any profits, concerned about participating in a business that was associated with such painful and traumatic memories for her and their children, and seeking financial independence, Jolie concluded that she needed to sell her interest in Chateau Miraval,’ she says.

Jolie claims a $54.5 million deal was struck to sell her share to Pitt but he angrily backed out after she submitted claims of domestic violence in their child custody case – a claim he refutes.

She also maintains that the deal was contingent on her signing a nondisclosure agreement (NDA) ‘that would have contractually prohibited her from speaking outside of court about Pitt’s physical and emotional abuse of her and their children.’ 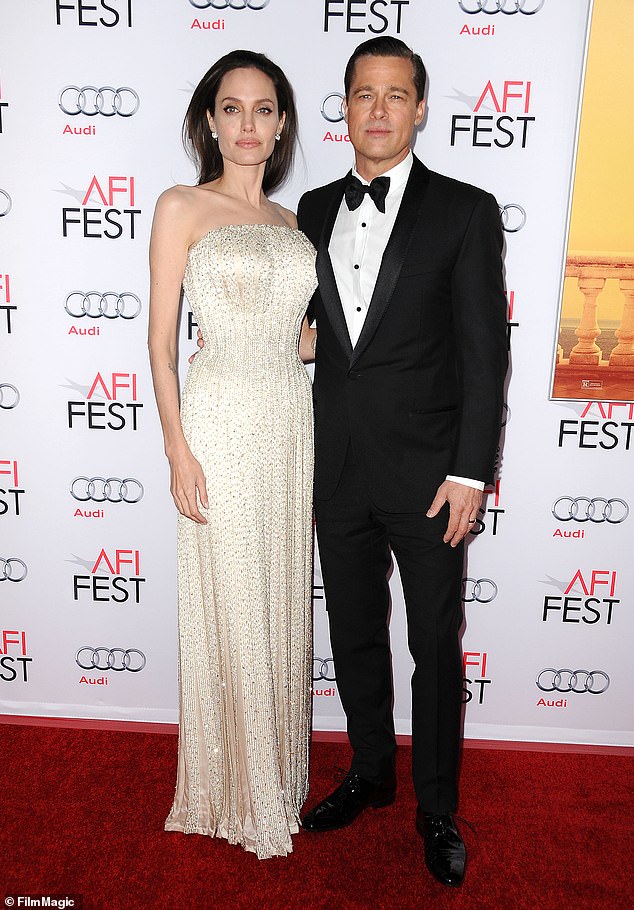 Jolie and Pitt married in 2014, and are pictured together in November 2015 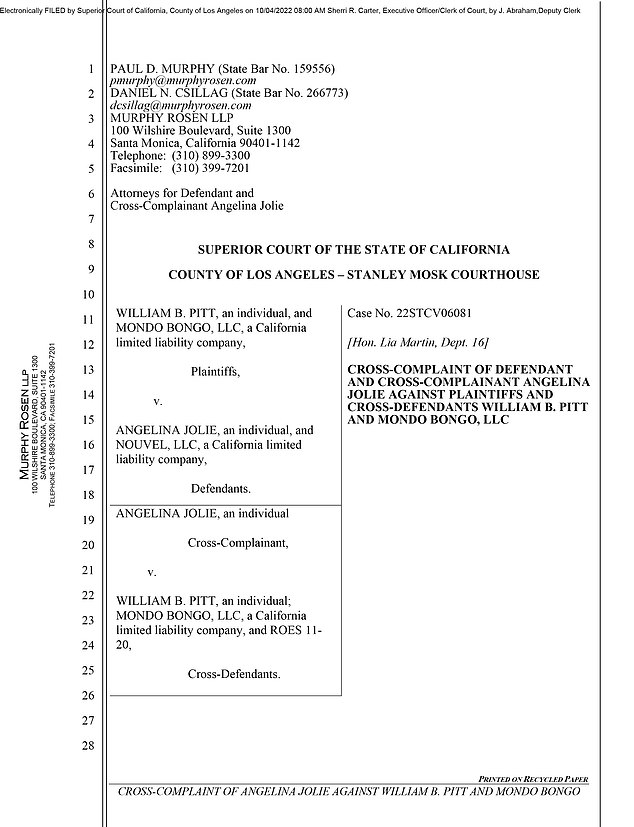 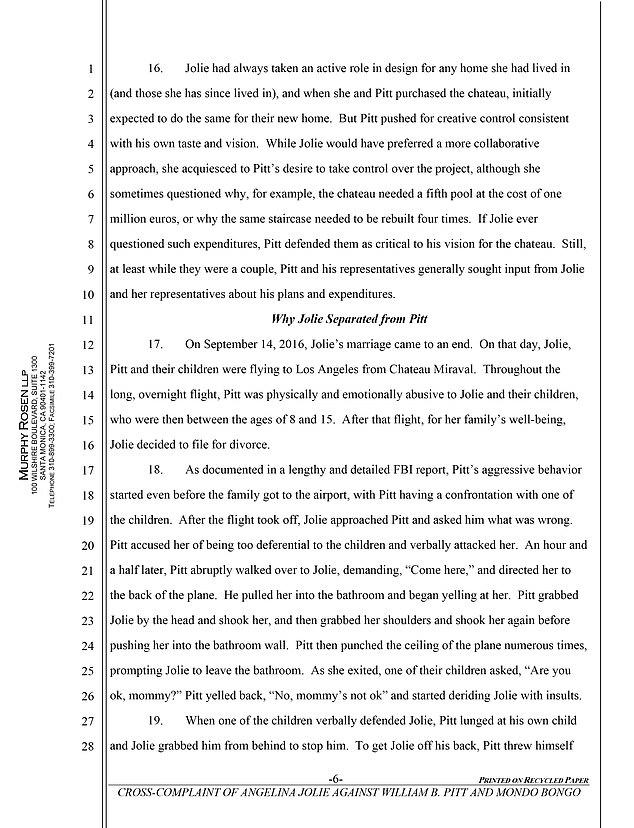 Sources close to Pitt say he’s never tried to stop his wife from speaking, nor has he ever disparaged her in public.

In fact, they reveal that it was Jolie who suggested an NDA in February of this year when lawyers for the two stars finally tried to negotiate a settlement in their years-long divorce proceedings.

The measure would have prevented either party from making derogatory remarks about the other in ‘a public forum’ but DailyMail.com understands that Jolie’s team never followed up on the idea – leaving her free to say what she liked.

The Grey Lady slipped in a paragraph confirming the actress had proposed her own non-disparagement proposal to Pitt’s divorce lawyer, Anne Kiley, earlier this year – but did not publish any sort of note explaining its editorial update.

‘Ironically, she’s the one that wanted to suppress the divorce proceedings,’ added our insider.

‘Brad requested a mutual NDA and non-disparagement strictly related to Miraval over concerns around sensitive financial information and protecting the brand; it had nothing to do with the divorce or the children.

‘She used the FOIA and Chateau Miraval to bring up all the dirty laundry and denigrate Brad yet again.

‘What kind of person files a FOIA request for information they’ve had in their possession for nearly six years? It serves no purpose other than to inflict pain.

‘And how on earth does it help their children to continually drag them into this?’

Pitt and Jolie met in 2005 on the set of Mr & Mrs Smith, playing a bored married couple who discover they are both assassins hired by competing agencies to kill one another.

They married at Chateau Miraval in 2014 and parented six kids – three biological and three adopted – who are now aged between 14 and 21.

Pitt has not shied away from his flaws, telling GQ magazine in the wake of their split that he was quitting booze and seeking therapy.

‘It’s hit me smack in the face with our divorce: I gotta be more. I gotta be more for them. I have to show them. And I haven’t been great at it,’ he said.