Venetian diners were not put off by flooding as a pizza restaurant carried on serving despite knee-high water levels and customers wearing wellies.

Staff at the Simons Bar Line kept serving despite as guests waded through water to get to their tables with three quarters of the city suffering heavy flooding.

Waiters can be seen in video footage carrying multiple plates of large pizza at the same times, just as they would if flood water was not lapping around their ankles.

The restaurant was still noisy with guests siting at every table with busy staff also paddling through the water, collecting plates and serving drinks.

In the footage posted on Facebook, customers can be seen arriving at the restaurant in Venice wearing wellies covered in plastic bags and waiting to be seated by staff.

The only part of the restaurant not under a foot of water was the kitchen area, which staff managed to keep dry.

The street outside the front of the restaurant seemed to be under even deeper water as residents walked through the rising flood levels.

Simone Sciascia wrote alongside the two-minute clip, ‘luckily there is Moses’ in Italian. 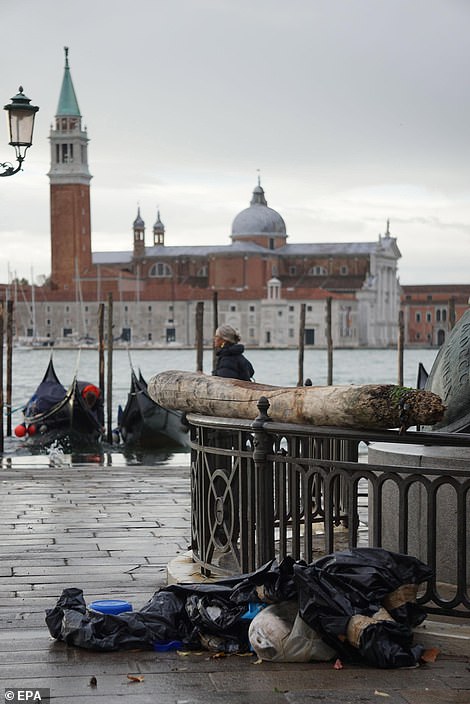 The owners of Caffe Florian, in St Mark’s Square in Venice, began bailing out floodwater on Tuesday (left) a day after three quarters of the city was submerged, causing the historic square to close (right, debris washed up in the storm) 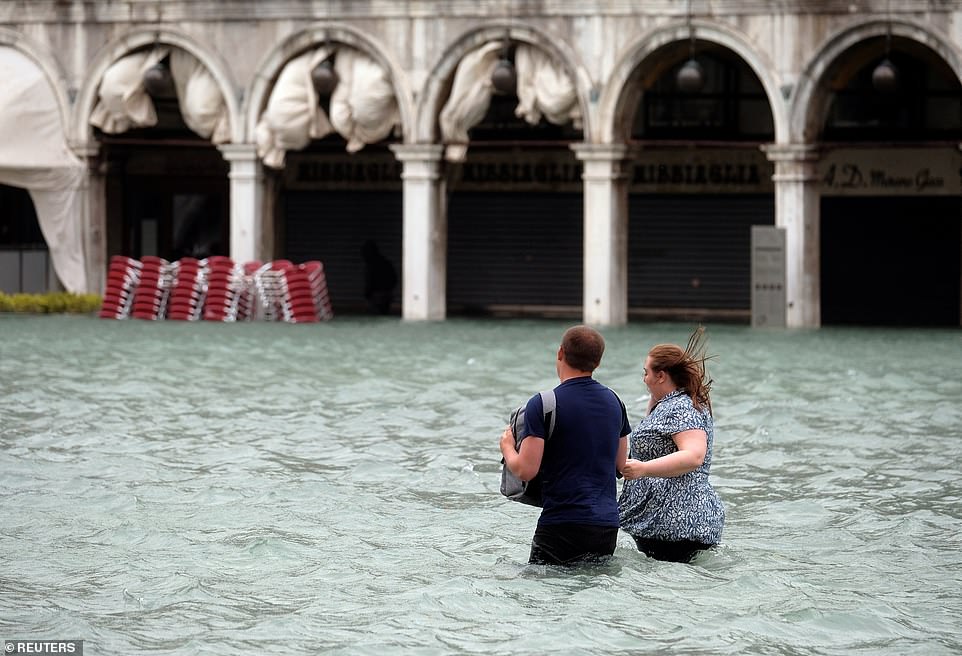 Waist deep: A couple walk in the flooded Saint Mark Square during a period of seasonal high water in Venice 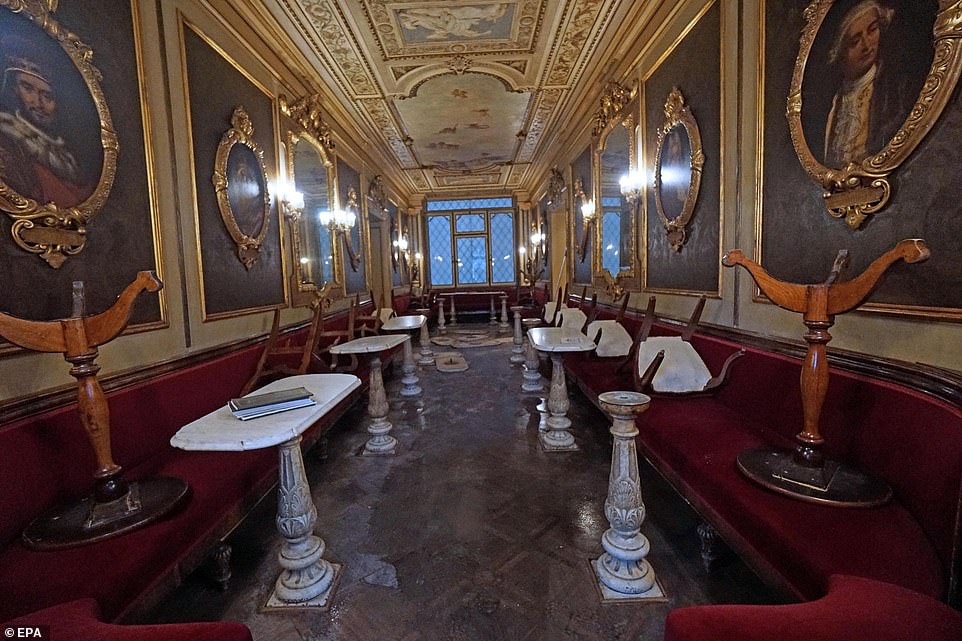 Caffe Florian, which has claim to being Europe’s oldest coffee shop having stood in St Mark’s square since 1720, saw its floors and furniture damaged by floodwater on Monday 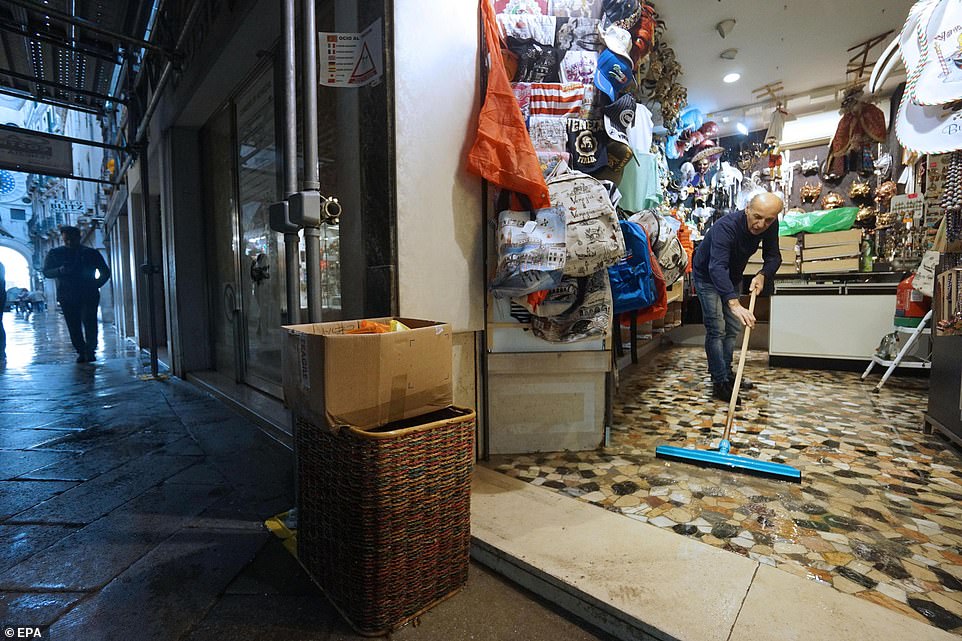 Cleanup efforts got underway in Venice on Tuesday after a ‘perfect storm’ of high tides and strong winds left three quarters of the historic city underwater on Monday.

The flood, the fourth highest in the city’s history, has reportedly damaged mosaic floors and bronze columns inside St Mark’s Basilica, where the water reached up to 35 inches.

St Mark’s Square, which had to be closed on Monday due to the floods, reopened on Tuesday as cafe and restaurant owners began bailing out their businesses in the hopes of attracting customers.

‘It was the perfect storm during which adverse meteorological conditions contributed to the situation in the sea and winds,’ civil protection chief Angelo Borrelli said.

Venice was not the only part of Italy to be badly impacted by severe weather, which killed 11 people across the country, largely in the north.

The majority of those deaths happened when cars were hit by falling trees, but one fatality was caused by a landslide in Trento, while a windsurfer died after being slammed into rocks in Emilia-Romagna. 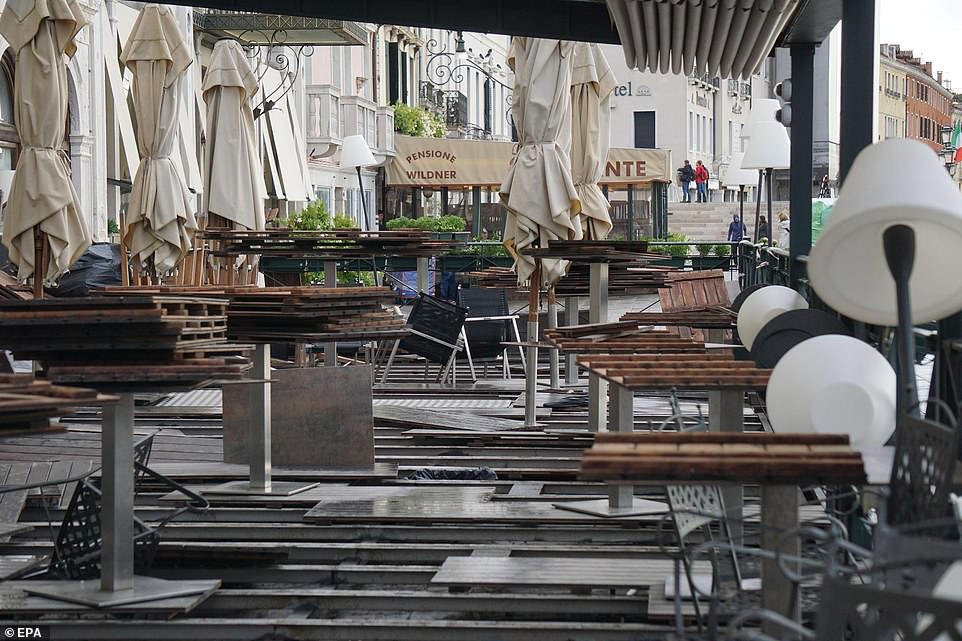 Tables, chairs and decking outside the prestigious London hotel in St Mark’s square was deserted on Tuesday having been largely wrecked during flooding the previous day 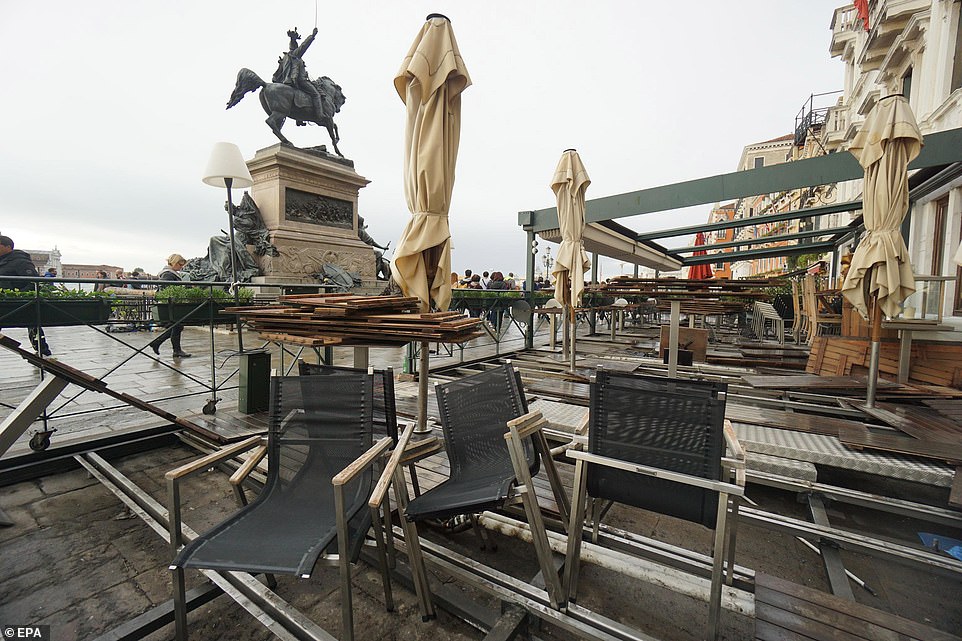 While bad weather was due to continue in Venice on Tuesday, only eight per cent of the city was due to remain underwater, allowing business owners time to repair the damage (pictured, the London hotel in St Mark’s Square) 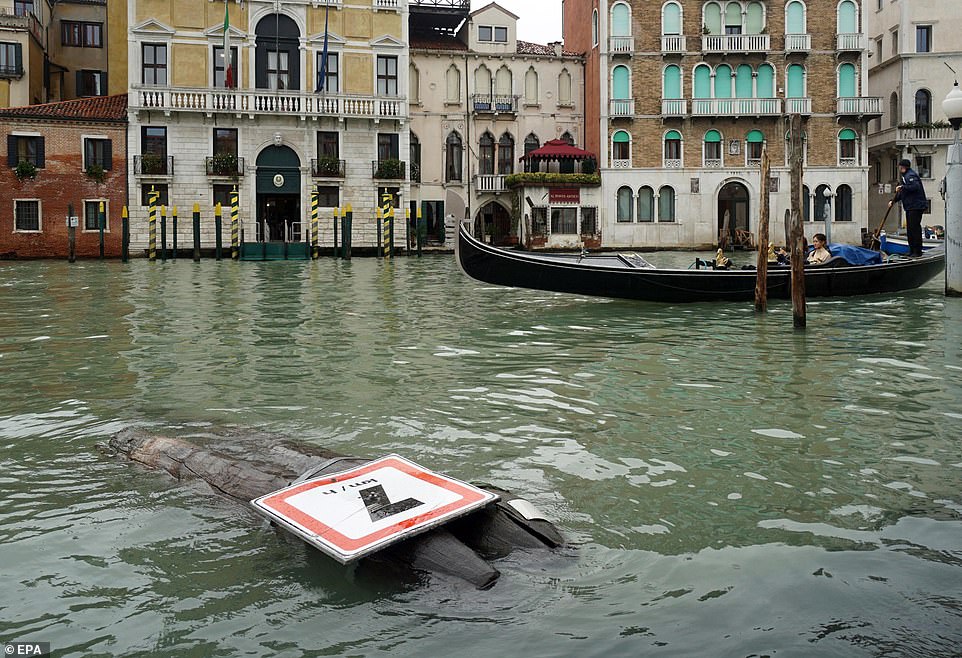 Flooding also impacted the city of Rapello, in the north west, when breakwater walls surrounding the Carlo Riva marina burst, causing water to surge through.

The surge overwhelmed many of the expensive yachts moored there, either partially sinking them or smashing them against nearby rocks, where they were stranded high and dry.

Among them was a £5.3million, 120ft yacht belonging to Silvio Berlusconi’s son Pier, the Seguno, which was photographed over on its side and half submerged in the water.

Extreme weather was expected to continue across the north on Tuesday, though only eight per cent of Venice was expected to remain underwater by the end of the day – thwarting predictions made on Monday that it could be the worst to ever hit the city.

Italy’s Civil Protection agency declared the highest alert possible in several northern regions on Tuesday, while an orange alert, the second highest on the scale, was issued for the central regions of Abruzzo and Lazio – which includes the capital Rome – where gale-force winds topped 100 kph on Monday.

The national fire brigade said it had intervened in 7,000 cases across the country and that one of its staff had died, crushed by a tree during a rescue operation in a small town in South Tyrol.

Nonetheless, the main highways across the country were open, with closures only on secondary roads.

The weather was expected to improve from the late afternoon, ‘giving the country a truce’ an official from the civil protection agency told Reuters. 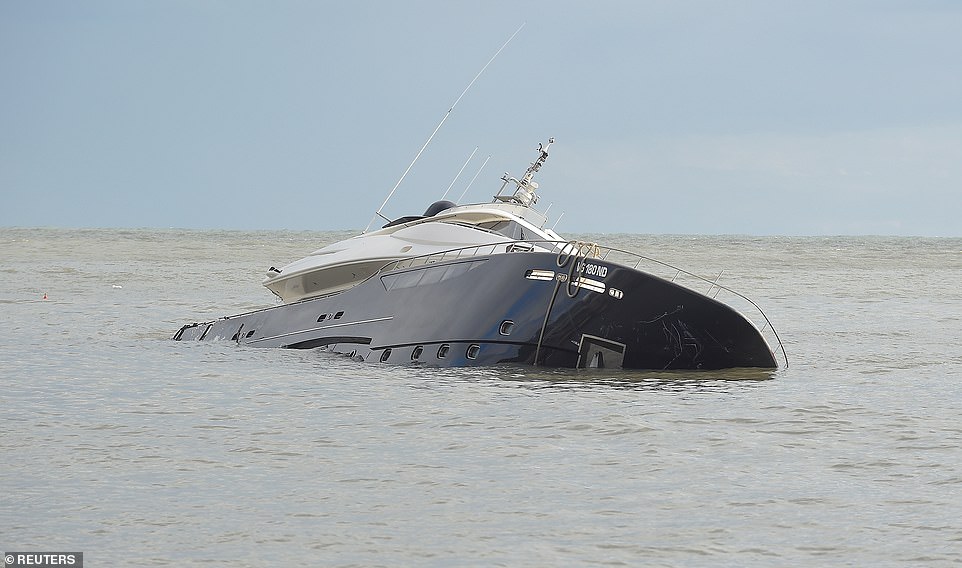 The marina at town of Rapello was also badly damaged by storms overnight after breakwaters burst, causing a water surge that overwhelmed many yachts. Among them was the £5.3million Seguno, owned by Silvio Berlusconi’s son 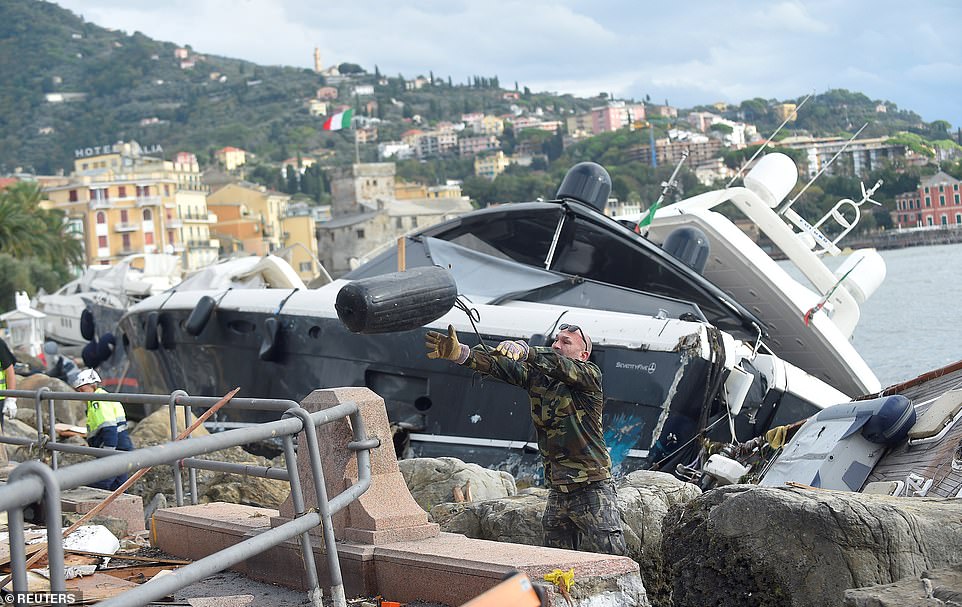 Many of the yachts moored in the marina were washed up against the rocky shoreline, leaving them high and dry on Tuesday when floodwaters drained away 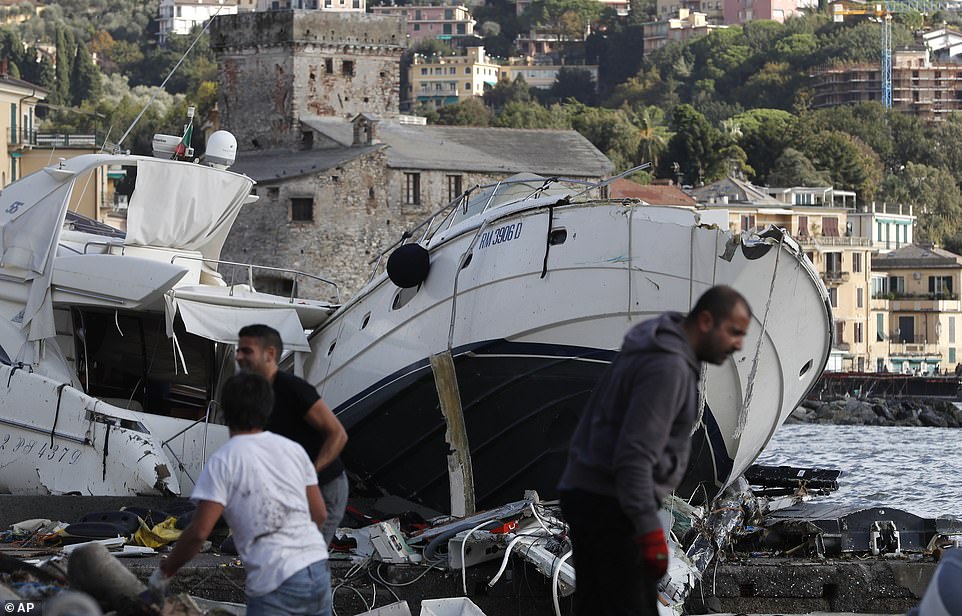 Several of the ships showed signs of heavy damage has harbour workers tried to clear the area on Tuesday, despite many parts of northern Italy remaining under severe weather warnings 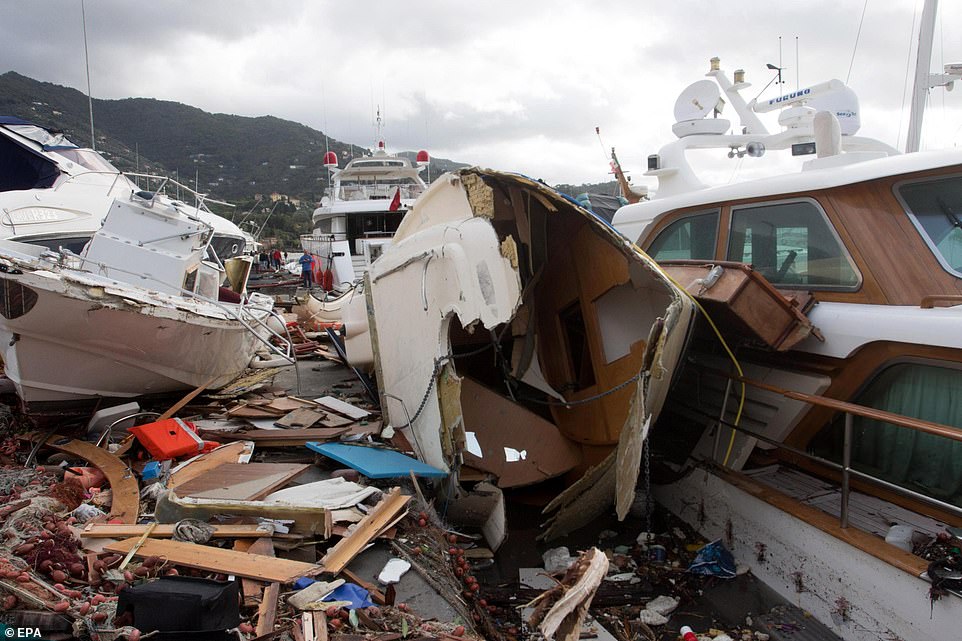 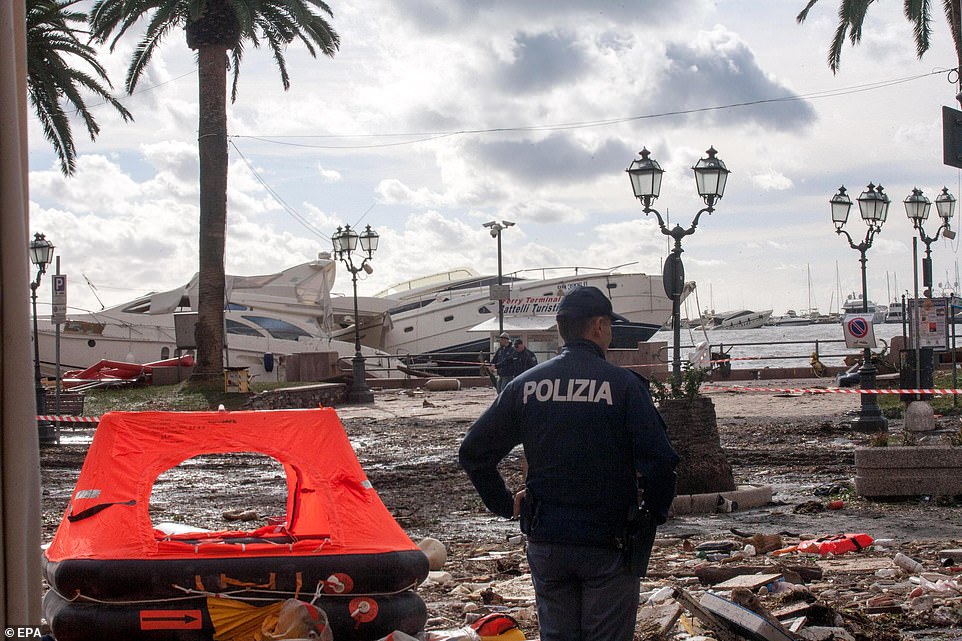 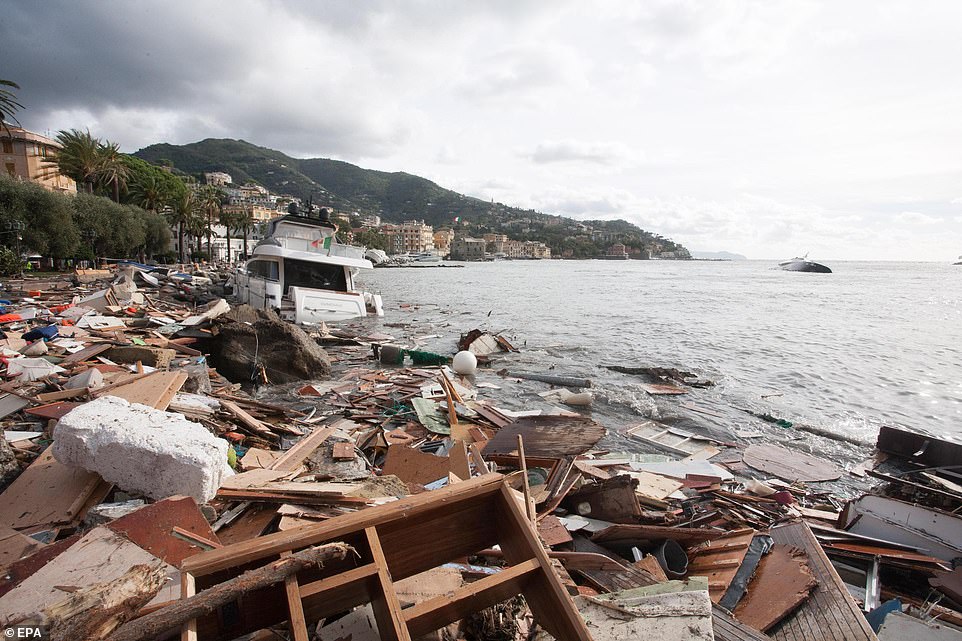 In total 11 people were killed across Italy during the storms, though none died in Rapello, where this damage was pictured