Rare, venomous ‘blue dragons’ were spotted by a seven-year-old boy vacationing at a Texas seashore earlier this month.

The boy, Hunter Lane, of Mesa, Arizona, was at Texas’ Padre Island National Seashore on May 2, when he found four of the blue dragon washed up on the shore in a matter of minutes.

Dad Trey Lane told CNN that in the 30 years that he had been vacationing at the spot on the Gulf coast, he’d never seen one of the dragons before. 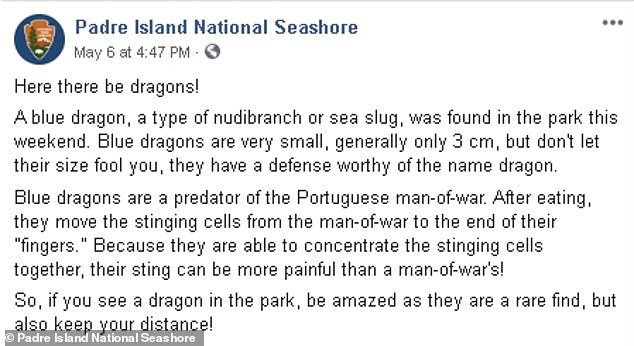 ‘Hunter loves sea creatures and thought he had found a blue button jellyfish,’ Trey told the news network. After picking it up in a beach toy, Hunter ‘proclaimed to me that he had discovered a new species!’

It turns out that the vividly-colored discovery were actually inch-long sea slugs called Glaucus atlanticus, which are natural predators of Portuguese man-of-wars, a species related to jellyfish.

‘Don’t let their size fool you, they have a defense worthy of the name dragon,’ Padre Island National Seashore wrote in a Facebook post accompanying Hunter’s pictures of a blue dragon he found. 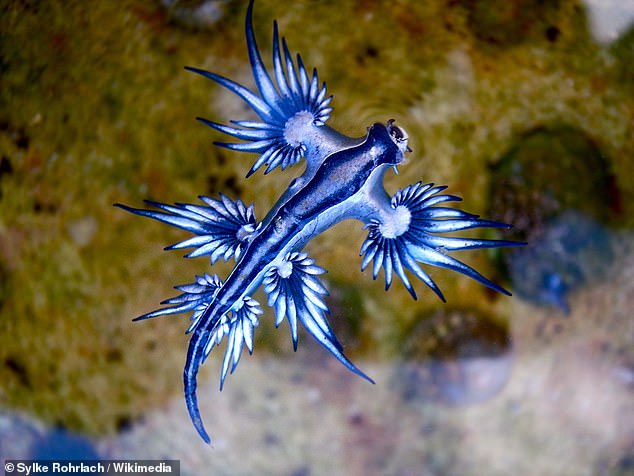 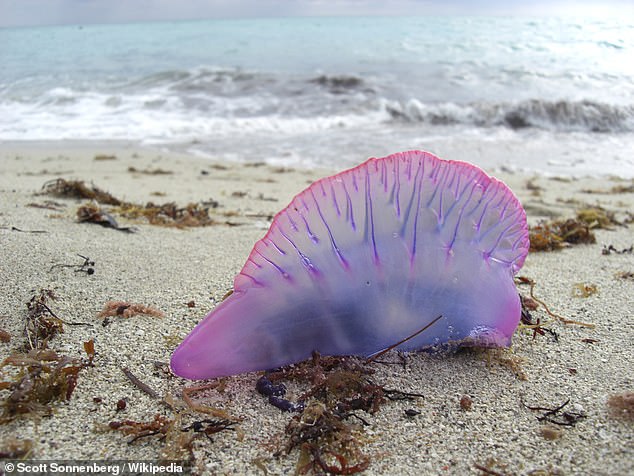 The blue dragons siphon off the stinging cells of the man-of-wars (pictured) they eat and the concentrate those cells, meaning their stings can be stronger than a man-of-war’s sting 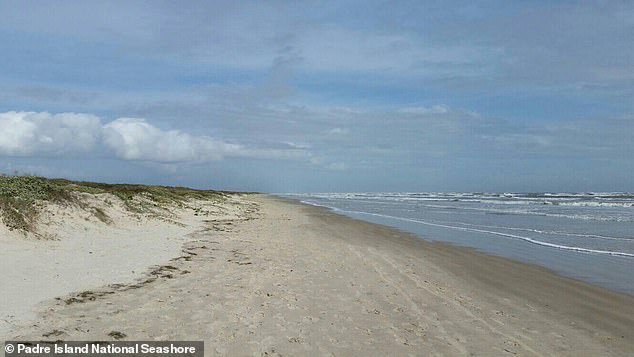 A Padre Island National Seashore (pictured) spokesperson said that people have been reporting blue dragon sightings recently, something which she hadn’t heard of in two years

The blue dragons are typically found in the Atlantic, Pacific and Indian Oceans. Although they live in the open ocean, they are said to occasionally wash up on shores.

Because their stings are so strong wildlife experts warn against picking them up.

‘If you see a dragon in the park, be amazed as they are a rare find, but also keep your distance!’

The spokesperson said she had worked at the park for two years without any reports of blue dragon sightings. The apparent new and sudden phenomenon could be attributed to a group of the slugs having washed up on the shore.

University of Texas Rio Grande Valley director for the School of Marine Sciences told KVEO that ‘We don’t see a lot of them’ and noted that ‘they kind of go around in masses of water, if you see one you see 1,000 of them.’