Vermont became the the ninth state in the US to legalize recreational marijuana on Monday.

Governor Phil Scott privately signed Vermont’s marijuana bill into law, making the state the first in the country to authorize the recreational use of the substance by an act of a state legislature.

The law, which goes into effect July 1, allows adults to possess up to one ounce of marijuana, two mature and four immature plants.

‘Today, with mixed emotions, I have signed’ the bill, Governor Scott said.

‘I personally believe that what adults do behind closed doors and on private property is their choice, so long as it does not negatively impact the health and safety of others, especially children,’ he added.

Vermont has become the ninth state to make it legal to buy and use marijuana recreationally.  Medical marijuana is legal in an additional 28 states and Washington, DC

WHERE  MARIJUANA IS LEGAL IN THE US

The Republican governor had until the end of the day Monday to sign the bill. His office issued a statement Monday afternoon saying he had signed the bill.

Marijuana is legal in a total of 29 states.

The state’s law contains no mechanism for the taxation or sale of marijuana, although the legislature is expected to develop such a system.

A group that opposed legalizing marijuana sees the law as a compromise since it doesn’t provide for selling the drug.

The group, Smart Approaches to Marijuana, or SAM, said it will continue to educate Vermonters ‘on the dangers that legalization poses to their beautiful state.’

While the bill was under consideration, a number of doctors from the Vermont Medical Society wrote a resolution calling for better labeling on medical marijuana and urging caution about its recreational use and the risks it could pose to children.

A baby in Colorado died of heart failure and doctors said they were unable to find a cause besides the marijuana edibles the infant ingested.

As an early adopter, Colorado has served as a bellwether for the impact of legal recreational marijuana on public health.

While the state has seen more traffic accidents since legalization, opioid overdoses have decreased.

Yet research has shown the positive effects of marijuana for many, including cancer patients and people with mental illnesses, and still other work has claimed it poses no health risks. 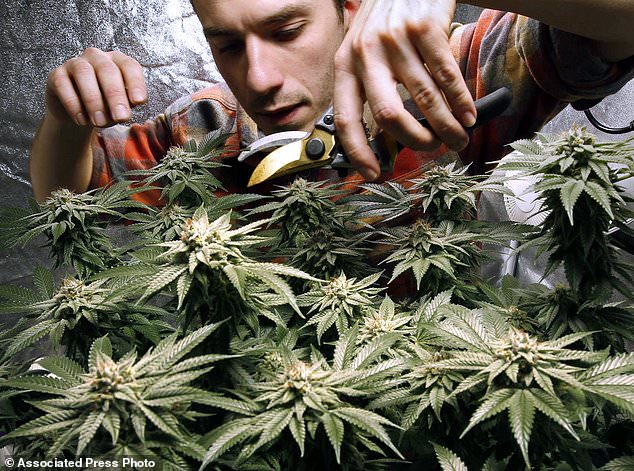 James MacWilliams prunes a marijuana plant that he is growing indoors in Portland, Maine on December 13, 2017. With the legalization of recreational marijuana in Vermont on Monday, residents there will be able to own two mature plants beginning July 1 (file image)

Vermont’s move is an incremental reform that will have little impact for most people in the state, said Matt Simon, New England political director for the pro-legalization Marijuana Policy Project.

‘I think the vast majority of Vermonters won’t notice any change at all,’ Simon said. ‘It’s simply eliminating a fine and eliminating a penalty for growing a small number of plants.’

The new law is unlikely to prompt people who don’t now smoke marijuana to take it up, said Robert Sand, a professor at the Vermont Law School and former county prosecutor who has advocated for years to change the state’s drug laws.

‘There will be times when people misuse marijuana, and opponents will cite the incidents as evidence that legalization was not a good thing,’ he said.

‘I believe we will end up with a net improvement of public health and safety even though I recognize there will be some bad outcomes,’ Sand said.

Lawmakers revised the proposal to do more to protect children and enhance highway safety.

The new law comes at a time of uncertainty fueled by the federal government.

Attorney General Jeff Sessions two weeks ago rescinded an Obama-era leniency policy that kept federal authorities from cracking down in states that have declared the drug legal.

Recreational use of marijuana already has passed in Maine and Massachusetts, and both states are awaiting the implementation of systems to tax and regulate marijuana.

New Hampshire’s House gave preliminary approval to a bill earlier this month that would allow adults to possess up to one ounce of marijuana and to cultivate it in limited quantities, even though a commission studying the issue won’t finish its work until next fall.

Vermont’s governor said last week he would decline to hold a bill signing ceremony for the new law because ‘some people don’t feel that this is a momentous occasion.’