Police were hunting for the prime suspect in one of the greatest British political scandals last night after being forced to admit he is still alive.

Detectives raced to the home of Andrew Newton who is suspected of trying to kill Liberal leader Jeremy Thorpe’s gay ex-lover more than four decades ago.

But in farcical scenes they left empty handed after he appeared to have fled the Surrey cul-de-sac hours earlier as neighbours confirmed he is alive and well.

Investigators believed the former airline pilot died 14 years ago and prosecutors abandoned the case as a trial could not be brought.

But a simple Google search would have revealed he is now calling himself Hann Redwin and been photographed at a fetish convention. 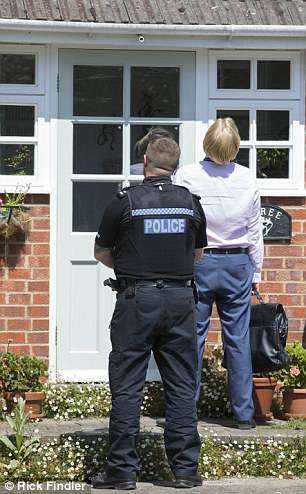 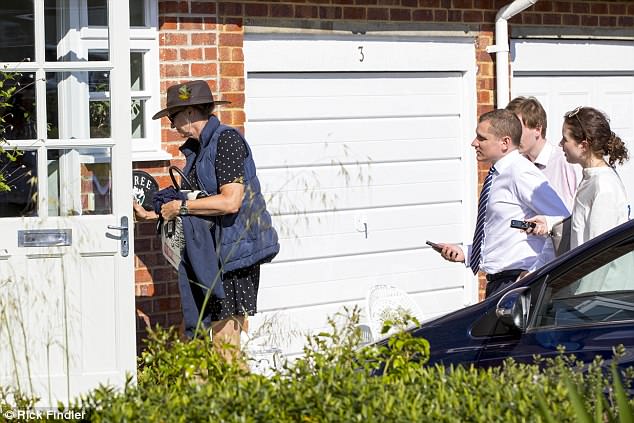 Reporters are pictured trying to speak to Newton’s partner Patsy Frankham, but Newton is nowhere to be seen 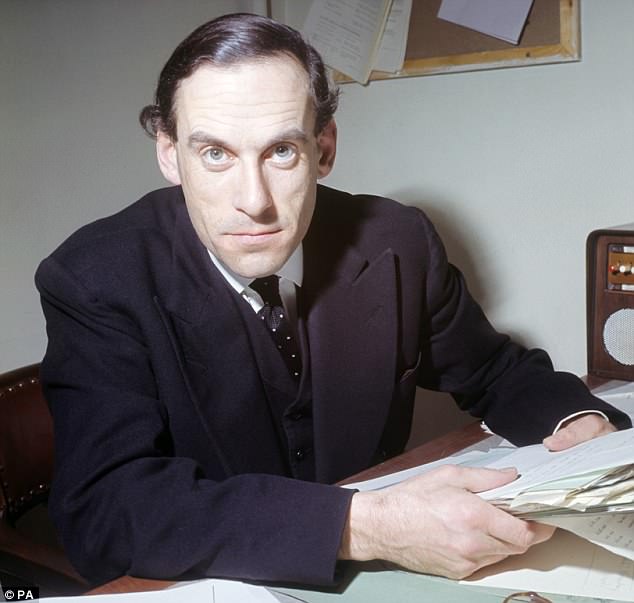 The revelation throws open the extraordinary affair which rocked the nation in 1975 with detectives probing whether Mr Newton plotted murder.

It came as the BBC aired the final episode of its dramatisation of the controversy, A Very English Scandal, starring Hugh Grant as Thorpe.

Last night, Norman Scott, 78, the intended victim, said there has been ‘a lot of skulduggery’ and it is time for the truth to come out.

‘I just don’t think anyone’s tried hard enough to look for him, I really don’t,’ he said. ‘There must be people who knew him and there would surely be a record of him dying.

‘I thought [the police] were doing something at last and soon found out that absolutely they weren’t, they were continuing the cover up as far as I can see.’ 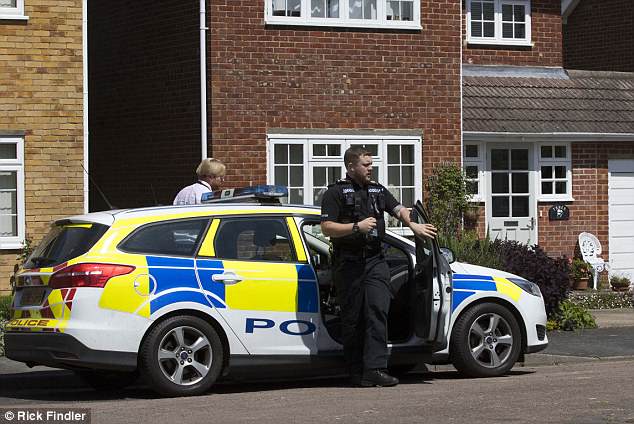 Thorpe was the MP for North Devon for 20 years and leader of the Liberal Party for two years during which he was offered a cabinet post by Edward Heath.

He was accused of hiring a hitman to murder his former secret lover in 1975 but was acquitted alongside three other men after an Old Bailey trial.

The MP feared he would air details of their affair, which took place at a time when homosexuality was still illegal.

Despite the huge fee, equivalent to £140,000 today, Mr Meighan went to the police and confessed to his and Thorpe’s involvement.

But he claimed both their roles were covered up to protect the senior politician, potentially by shadowy elements with the Establishment. 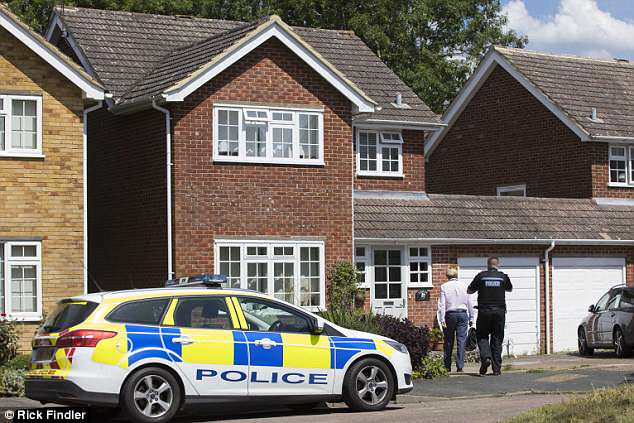 Accompanied by a uniformed constable from the local force (pictured), the officer knocked on the door but received no answer

A fresh police investigation codenamed Operation Velum was launched by Gwent Police, because they had no links to the original saga.

But the case was dropped a year later after officers told prosecutors that Mr Newton, the only person who could back up Mr Meighan’s claims, was dead.

He is said to have taken on the role of hitman after Mr Meighan – an old school friend – withdrew and was convicted of shooting the former model’s Great Dane Rinka in 1976.

Mr Scott claims he escaped death after Mr Newton then turned the gun on him, but it jammed at the vital moment.

Mr Newton gave evidence for the prosecution at Thorpe’s trial for conspiracy to murder and was ultimately jailed for possession of a firearm. 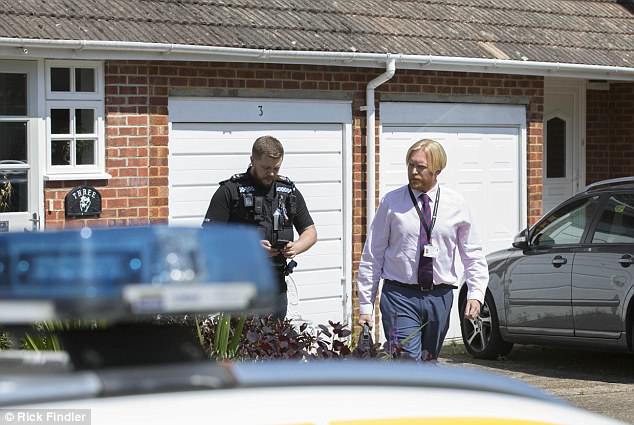 Empty handed: Both officers were left disappointed after no one answered the door of Andrew Newton’s Surrey home

In a statement, Gwent Police said: ‘We have now revisited these enquiries and have identified information which indicates that Mr Newton may still be alive.

‘As a result, further enquiries will be conducted to trace Mr Newton to assess if he is able to assist the investigation.’

Yesterday, a plain-clothes detective made the 160 mile trip to Mr Newton’s £500,000 home near Dorking, Surrey.

Accompanied by a uniformed constable from the local force, the officer knocked on the door but received no answer.

Neighbours revealed Mr Newton has been living there under his new name for several years with his 61-year-old partner Patricia Frankham.

The former nurse at nearby Leith Hill GPs practice bought the property in 2014 before retiring last year. 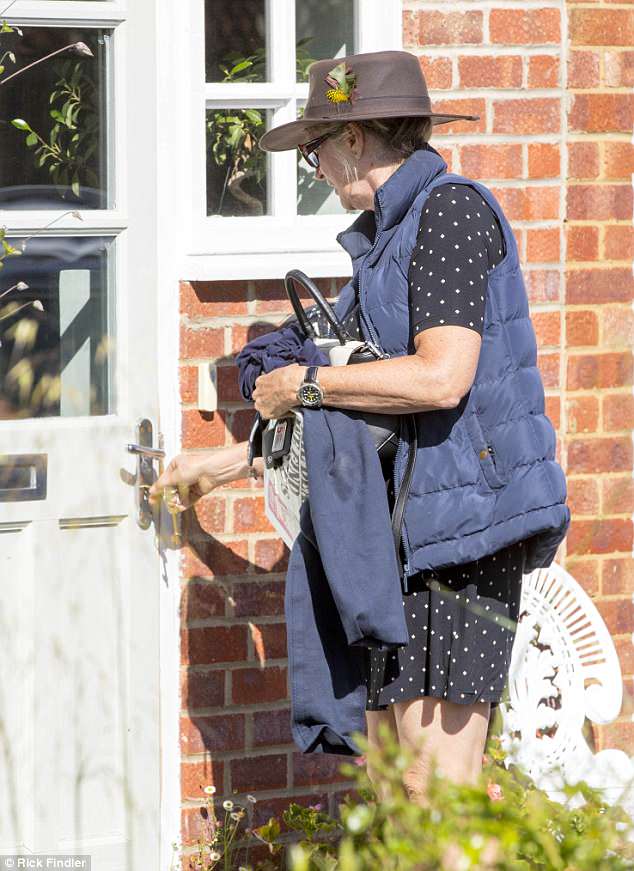 On Saturday, Mr Newton was photographed dressed casually in a blue shirt and jeans as he returned from a shopping trip.

But, according to posts online, people who knew him described him as ‘a seriously strange man’ known for his ‘distinctly short shorts’.

One resident said: ‘She’s the sweetest, loveliest neighbour you could ask for. Nobody would have a bad word to say against her.

‘She worked at the GP surgery for years and everyone there loved her and didn’t want her to leave and now it looks like she’s got a boyfriend who was on the wrong side of the law.

‘What I don’t understand is why it has taken this long for the police to arrive. Patricia moved here a few years ago and you would also see him coming and going.’

Gwent Police did not respond to requests to explain why it took up to eight officers a year to conclude Mr Newton was dead.

Evidence of his name change can be found with a Google search after the death of his girlfriend in 1994 dragged him back into the spotlight.

He gave evidence at an inquest after Caroline Mayorcas fell to her death while climbing in Switzerland the previous year Police ruled out foul play. 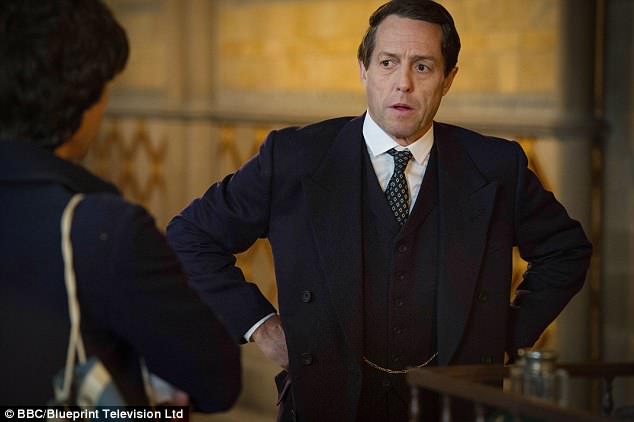 Using the relatively unusual name Redwin, he then surfaced again three years ago in a magazine article about aviators who use Redhill Airfield.

In 2004 – the year police said he died – he was photographed wearing a thong, top hat and tails, at the Skin Two Rubber Ball fetish convention at West London’s Hammersmith Palais.

In a BBC4 documentary also broadcast last night, Mr Scott said there were at least five often outlandish plots to kill him.

He said these included being dropped from a helicopter and thrown down a Cornish tin mine, adding: ‘It is laughable, but it’s also very, very serious’.

Speaking from his remote Devon home, Mr Scott said he is convinced there was ‘absolutely conspiracy to murder’. 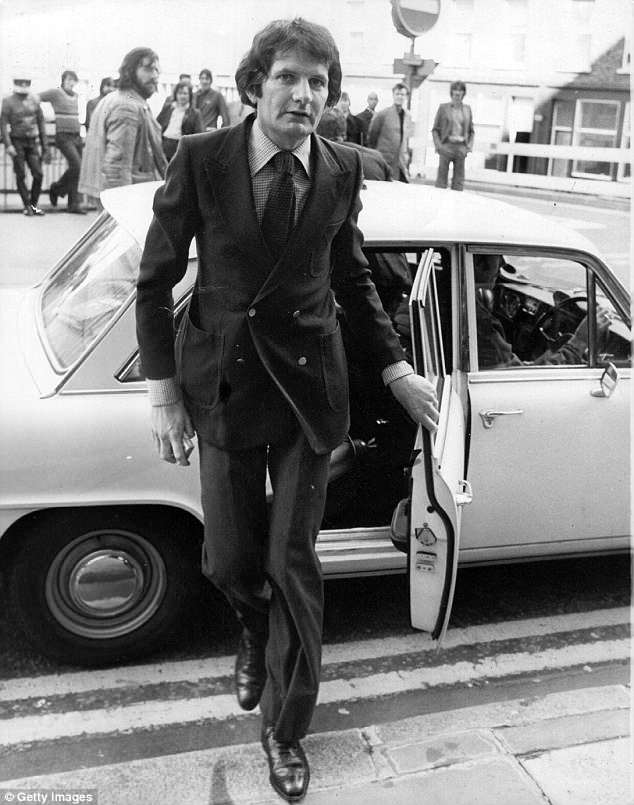 ‘Because the truth hasn’t come out, there’s a conspiracy to murder me and it won’t seem to go away and I have to see it through,’ he added.

In February 2017, Mr Scott was sent a letter by a senior prosecutor who said the case was closed as the suspect is dead.

She wrote: ‘Various key witnesses are now deceased, including Andrew Newton, who according to Mr Meighan was in the meeting during which the contract was agreed.’

Asked whether there is no conspiracy, he replied: ‘No, I know. That’s why a guy held a gun to my head and killed my dog and left me to make a fool out of myself the rest of my life.

‘People not believing in me – but I believe in myself and I know a lot of people do, a lot of my friends do.’ Yesterday, Mr Meighan, who lives in west London, branded the police reinvestigation ‘crazy’, adding: ‘It’s all been said’.

He told the Daily Mail: ‘I don’t really want to talk about it. I have enough of talking to people.’ Earlier, he branded the BBC drama ‘ a load of cobblers.’

In 2014, he told a newspaper he confessed to his role in 1975 but was given a prepared statement to sign which cleared him and removed any reference to Thorpe.

He said: ‘It also cleared me completely. It was a cover-up, no question, but it suited me fine.’ It meant he did not give evidence at the Old Bailey.

At his large detached home overlooking Swansea bay in Port Talbot, Wales, Mr Deakin told this newspaper: ‘I have nothing to say’. Mr Holmes and Mr Le Mesurier are dead.

A spokesman for the Crown Prosecution Service said it is waiting for a new file from police.