‘I’m the last man standing,’ says Tony Blackburn, and he’s absolutely right. The veteran with the famously rich voice is the last of his generation of DJs to still be broadcasting to the nation, with the hugely popular Sounds Of The Sixties show every week on Radio 2. Now he’s taking it on the road with a live tour featuring singers and musicians in place of the original performers, because as the relentlessly cheerful Blackburn puts it: ‘A lot of the music stars of the Sixties, like Bobby Vee, are not around any more. I’m the only one actually still alive!’

Blackburn is a broadcasting legend who earned his sea legs on the pirate radio ships of the Sixties, was the first voice on the new Radio 1 in 1967 and brought his beloved Motown sound to Britain. ‘I introduced soul music into this country, because it wasn’t being played by the BBC until I got there.’

Tony Blackburn with his then wife Tessa Wyatt in 1975. When the couple split in 1977, Blackburn famously had an emotional meltdown live on air

The 75-year-old is typically perky when we meet at a hotel near Broadcasting House, dressed in jeans, a plaid shirt and a leather jacket. The face is craggy and the hair silver, but there’s lots of it and he’s still got the sunshine in his voice that used to wake up half the population. I don’t want to dampen the mood, but Blackburn is also one of the last DJs of his generation with his reputation intact, having seen peers such as Chris Denning, Jonathan King and Dave Lee Travis convicted of indecent assault or worse. Not to mention Jimmy Savile, who was exposed after his death as Britain’s worst serial abuser. We’re going to have to talk about that and his brief sacking from the BBC during the Savile inquiry, before he was fully reinstated, but Blackburn refuses to let anything tarnish his own experience of the Swinging Sixties.

‘I loved being in the Sixties. I wasn’t married. I was free and easy, never hurt anybody. I don’t see anything wrong. I don’t regret any of it at all.’

OK, but isn’t he just a bit embarrassed about just how swinging it all was, after saying in his autobiography that he had 300 lovers before settling down?

‘Attitudes have changed. It’s become much more PC now, hasn’t it? Anything you say upsets somebody nowadays. I can see the point of view, but it was a totally different era. I went out with a lot of girls but I was single. It’s the most natural thing to do. All my friends were going out with different people as well. Then, when I eventually met somebody and married them, I was very faithful.’

He married the actress Tessa Wyatt, star of Robin’s Nest, in 1972 and had a son called Simon. When the couple split in 1977, he famously had an emotional meltdown live on air, pleading with her not to go and playing tear-jerkers like If You Leave Me Now on repeat. After that, as the autobiography says, he took to prescription drugs and one-night stands to numb the pain: ‘Four different partners each week was my chief way of staving off the sadness.’

In those days, he says his image was ‘a caricature of a ladies’ man’ with a perma-tan, silky shirt open to the waist and a big chunky medallion. Three hundred, though? ‘If you work out the average [over 20 years], it’s not fantastic!’ He laughs, then contradicts what he said earlier. ‘I regret putting it in the book, because I don’t think it’s something to be particularly proud of. It’s just that I hadn’t met anybody who I wanted to settle down with. Radio 1 DJs were as big as the acts that we were playing. I don’t think the DJs who are on now realise what it was like.’

At the height of their fame, Blackburn and peers like Noel Edmonds were mobbed. ‘I’m hoping that on the Sounds Of The Sixties tour I will get mobbed! I mean, that’s what I’m basically doing it for! Anybody who comes along, just do feel free to mob me, you know? Make me feel really good!’

He’s joking, of course. But it’s all a bit awkward, given the current mood. Take the Radio London show that he did during the Eighties. ‘It was a sex and soul show, and I was chatting people up. Stuff we couldn’t do now. It was harmless fun. We called it an X-rated programme, but I wouldn’t do anything that was harmful to anybody, it was just a joke. I was chatting girls up, I was chatting men up. I’d go, “You sound like a nice boy, I wouldn’t mind having a glass of wine with you in the pub afterwards.” So it couldn’t be a sexist programme, it was just having fun.’

Not everybody thought so. ‘The head of Radio 1 said, “Could you please stop Tony Blackburn talking about stockings and suspenders on the radio?” My Radio 1 contract wasn’t renewed.’

He had been playing children’s songs on Saturday and Sunday mornings, after taking over Junior Choice from Ed Stewart, but he didn’t mind the sack that time. ‘I hated playing Puff The Magic Dragon and all that stuff. It just wasn’t me.’ People still ask about his dog Arnold to this day, even though it was clearly a recording. ‘He’s still going. He’s 55. He’s fed on magical dog biscuits.’

I need to get back to how attitudes have changed, but he sees it coming. ‘I can’t really get into this area actually, because you’re going to Jimmy Savile. It’s the only thing I can’t talk about, unfortunately.’

The inquiry into Savile’s time at the BBC was led by Dame Janet Smith, who said Top Of The Pops was a breeding ground for predatory men. There was no suggestion in her report that Blackburn was one of the abusers, but she did say there was documentary evidence that he had been questioned by the head of light entertainment and a leading QC after a complaint was made by a 15-year-old girl in 1971. When the report came out in 2016, Blackburn was outraged. Nobody had ever told him about the allegation, he said. It certainly wasn’t true, and the interviews had never taken place, he said. 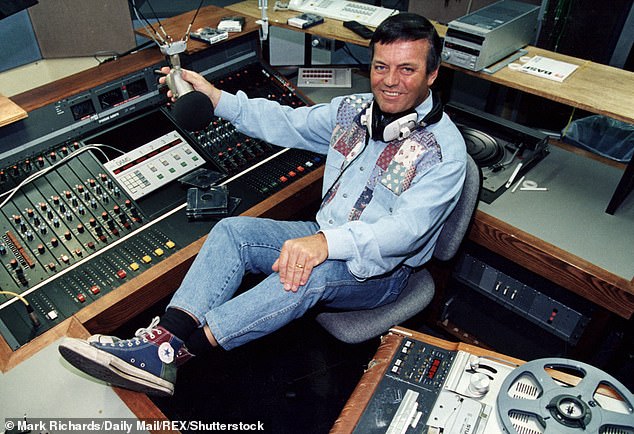 By the Nineties, Blackburn and his DJ friends had become a joke, lampooned by Harry Enfield and Paul Whitehouse as the characters Smashy and Nicey

The director-general of the BBC took him off air anyway, for allegedly failing to co-operate fully with the inquiry. Blackburn denied this too and threatened legal action… but was suddenly reinstated months later and returned to Radio 2. He had done nothing wrong but, he says, his reputation and career had nearly been destroyed by the BBC. There was no apology.

Was he relieved to go back? ‘Absolutely, yes. And it was just an unfortunate incident that happened. But my being back shows that it was all a mistake.’

OK, so this is the first revealing thing he has said about this since it happened. Blackburn has taken his reinstatement as an apology from the BBC, even though it has never been said publicly. ‘The fact that I’m broadcasting back there again shows we’ve all moved on.’

Blackburn’s private life changed when he met his current wife, Debbie, a performer turned theatrical agent. ‘We did a pantomime together. She is 17 years younger than I am and was in the chorus. We got married about a year and a half later.’ That was in 1992 and they later had a daughter, Victoria.

By the Nineties, Blackburn and his DJ friends had become a joke, lampooned by Harry Enfield and Paul Whitehouse as the characters Smashy and Nicey. Was he offended? ‘I thought it was so funny. Paul Whitehouse was playing me with a bit of Noel Edmonds in there and Harry Enfield was a cross between Alan Freeman and DLT. I loved it.’

Over the years his reputation grew again and his genuine love and support for soul music was recognised. He was given the Radio Academy’s Lifetime Achievement award twice. But the big change in public opinion came in 2002 with the first series of I’m A Celebrity… Get Me Out Of Here!, which he won. The British public fell back in love with him, and Blackburn was crowned the first King of the Jungle, beating his camp mates including the boxer Nigel Benn, self-confessed political battleaxe Christine Hamilton and the socialite Tara Palmer-Tomkinson. ‘I loved the rainforest and it changed me. No offence to the people I was in camp with, but they were horrendous. They were arguing the whole time like a load of schoolchildren. For some reason I became the Henry Kissinger of the jungle. They were coming to me with all their problems and I’d sort them out.’

His surge in popularity got Blackburn on to Radio 2, where he is now an institution. And with Savile out of the way, he even feels bold enough to attack some of the BBC’s flagship policies, like the hiring of personalities such as Alan Carr or Ricky Wilson from the Kaiser Chiefs. ‘I come from the era of proper DJs, rather like Chris Evans. A lot of the other people on the radio now are TV personalities. We control the equipment. A lot of them don’t.’

He’s said to be worth £8 million and lives in a nice house in Hertfordshire. ‘I work for four radio stations.’ He records a show for KMFM in Kent on a Wednesday, goes to BBC Berkshire on Friday afternoon then up to town and Wogan House to do the Golden Hour on Radio 2 that night. He is up early on Saturday morning to do Sounds Of The Sixties from 6am, then he appears on BBC Radio London on Sunday lunchtime. ‘I choose all the music as well. I still get a kick out of it. It’s like a drug to me, radio. If I wasn’t doing it, I’d get really bored. I don’t have any hobbies. My hobby’s the music.’

Isn’t it hard getting up so early to do Sounds Of The Sixties? Blackburn shakes his head. ‘I can only sleep for about four hours a day. The last time I slept really well was in 1976.’

He intends to keep going until one important person tells him to stop. ‘I’ve said to my wife Debbie, “If you think I’m not doing it as well as I could, please say.” ’

He grins, because this is Tony Blackburn, a joker to the last. ‘I think I’m all right at the moment… I still know where I am!’

Tony Blackburn hosts the BBC Radio 2 ‘Sounds Of The Sixties’ live show, which will tour the UK later this year. livenation.co.uk