Veteran tells how his trailer home was destroyed by Harvey

A Gulf War veteran woke up on vacation to the devastating news that Hurricane Harvey had obliterated his trailer home and everything he owns.

Charles Bowman, 70, said it looks like a ‘bomb blew up’ inside his trailer after a huge tree crashed down on top of it.

The father-of-two, who is visiting friends in the UK, anxiously watched news reports warning that the tropical storm was set to hit largely unpopulated areas.

But when it made landfall on Friday night, the lethal category four hurricane pummeled his small hometown of Rockport, Texas, located 220 miles south of Houston.

Shocking photos show floodwater surrounding what remains of the trailer where Charles lived with his two sons, Erik, 26, and John, 29.

The heartbroken veteran, who served in the US Army for over 20 years largely with the 82nd Airborne Division, retiring as sergeant 1st class, said: ‘I was in the Gulf the first time around and I saw a lot of devastation – dead bodies, things like that.’

Charles Bowman, a 70-year-old Gulf War veteran, learned his trailer home in Rockport, Texas was destroyed by Hurricane Harvey while he was halfway across the world in the UK 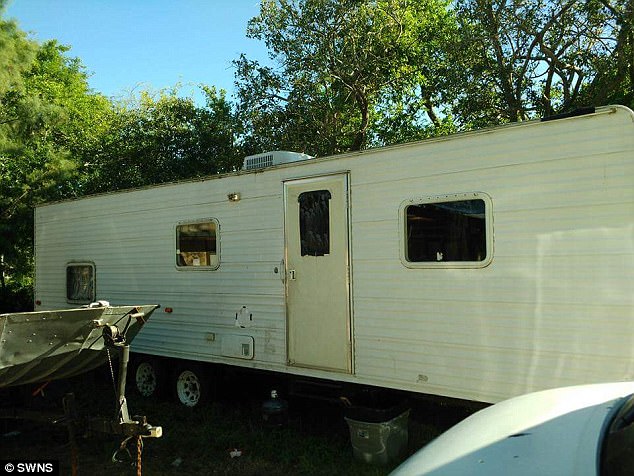 How it was: Bowman, a sergeant in the 82nd Airborne, estimates he lost $4,000 to $5,000 worth of possessions after a tree fell on top of his trailer during the storm 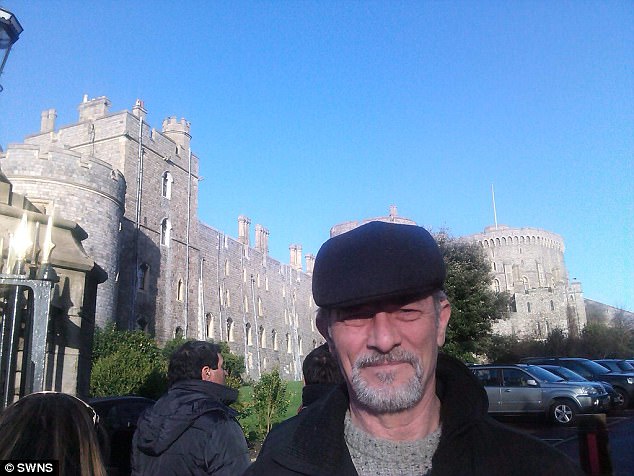 Devastation:  Charles Bowman was on vacation in the UK, where he visited Windsor Castle, when he learned of the horror which had unfolded in Texas

‘But I really can’t think of an equivalent to this. It is like a war zone in the Middle East or something.’

Charles grew up in the Midwest and is accustomed to tornadoes, but he has never witnessed this level of destruction from a storm. The devastation reminds him of the stories he heard from other veterans about when they were deployed to Haiti in the 1990s.

‘I think I shut things off – being in the military has made me jaded. But even after all those years in the army it is still shocking. It is worse than what I saw in the army.’

Charles and his sons didn’t expect for the storm to be this severe. The strongest wind gusts in Rockport clocked-in at 108 mph, according to the Weather Channel.

He said: ‘We get the occasional storm but nothing like this. The whole town has been devastated.’ 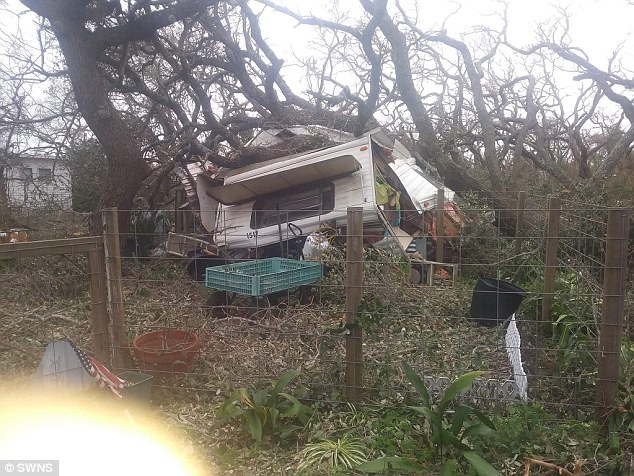 After: Charles was devastated when he saw how a tree fell on top of his home, destroying everything. He told DailyMail.com: ‘When I saw the photos my heart just sank’ 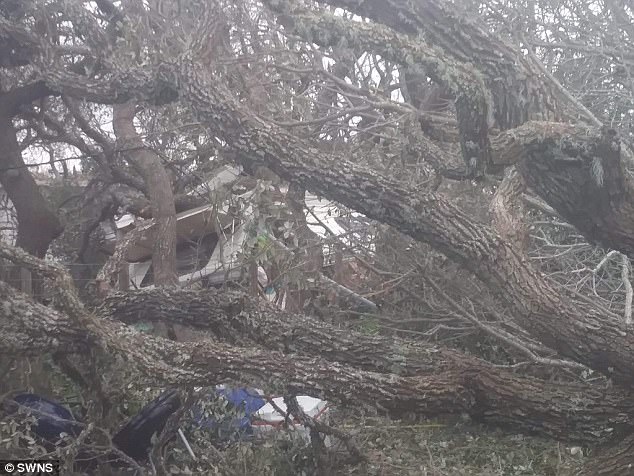 Because of the damage to his home, Charles is extending his trip from a few months to six months to pick up the pieces of his life in the US

His sons tried to evacuate Rockport with the RV but it had a flat tire. Since there was nowhere to fix it, they had to leave it behind.  Then, the storm hit.

Charles said: ‘I live on the coast and I’m not a wealthy man. Everything is gone.’

He lost everything, including his motorcycles, clothes and a treasured pool cue that was given to him by a friend.

‘It’s like a bomb blew up inside and there is this huge puddle around it.’

‘When I saw the photos my heart just sank. I was devastated. My whole life is there.

‘My home has literally just gone, which makes me homeless.’

Charles arrived in the UK in mid-August and had planned to travel around for a few months visiting friends. 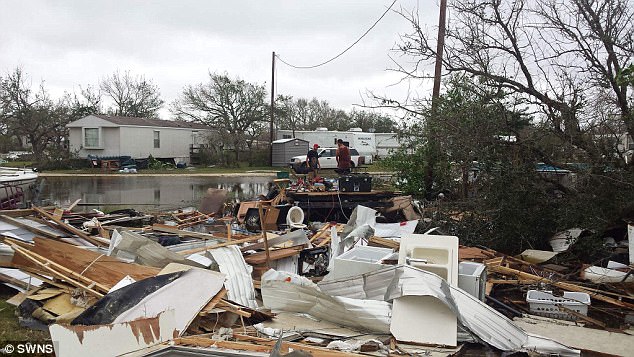 Charles is now homeless and so are his two adult sons, Erik and John, who lived with him. He said they are scrambling to find a place to store what is left of what they own 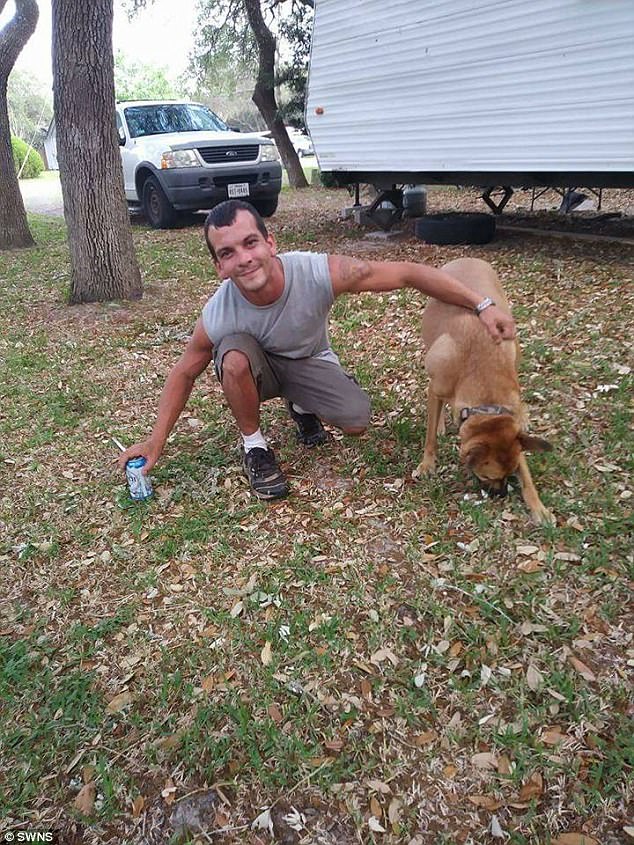 Erik (pictured) and John were planning on riding the hurricane out before it turned deadly. They stayed at an evacuation center once the storm hit

Now he intends to stay for six months while trying to pick up the pieces of his life in the US.

His sons, who work at a landscaping company which was also completely demolished by the bad weather, evacuated the town.

He said: ‘They are running around, scrambling together to find a place to get cover and shelter, a place to store their valuables.’

Both of his sons were staying with him before the hurricane hit.

‘When the hurricane hit, they were going to ride it out and it approached and became more deadly-looking.

One of Charles’s friends convinced Erik and John to evacuate. The two spent the night of the hurricane at an evacuation center after going to Beeville, Texas which is 60 miles inland northwest of Rockport.

‘Then they decided to go back into town and discovered what was left, which is basically nothing. We are all devastated.’

Charles said: ‘I have never seen anything like it before.’