A WWII veteran who was shot in the groin and was told he might never have children went on to have raise an enormous family.

At the age of 92, Eric Edwards is a father to two sets of twins, a grandfather of 10 and a great-grandfather to 23.

The war hero landed on Normandy beach 24 hours after D-day in 1944 fought across the continent before he was cornered by a German soldier.

Mr Edwards was left badly injured and taken as a prisoner of war. 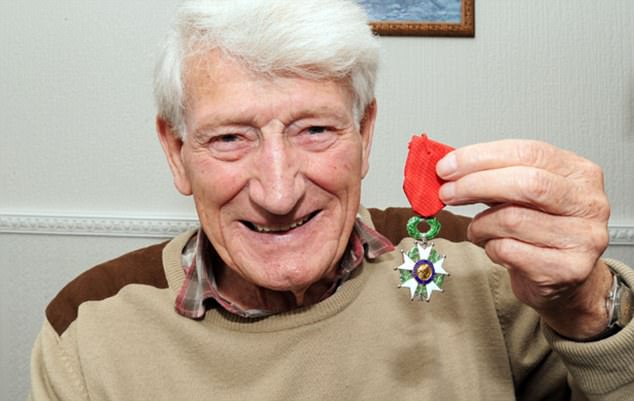 At the age of 92, Eric Edwards is a father to two sets of twins, a grandfather of 10 and a great-grandfather to 23. He is pictured holding his Légion d’Honneur medal

Much to a doctor’s disbelief, he went on to bring up an enormous family.

Mr Edwards still has 10 pieces of shrapnel inside his body which he sustained during heavy shelling.

The great-grandfather, who was called up when he was 18, has now spoken of his war days after he was appointed to the rank of Chevalier in the Ordre National de la Légion d’Honneur.

It was when he was pushing back the Germans to Berlin that he was shot four times — one shred straight through his penis.

‘It went in one side and out the other. I’ve still got little bits of shrapnel in my body,’ Mr Edwards told the Nottingham Post.

A farmer and his wife had taken him in but he was soon captured by German troops. 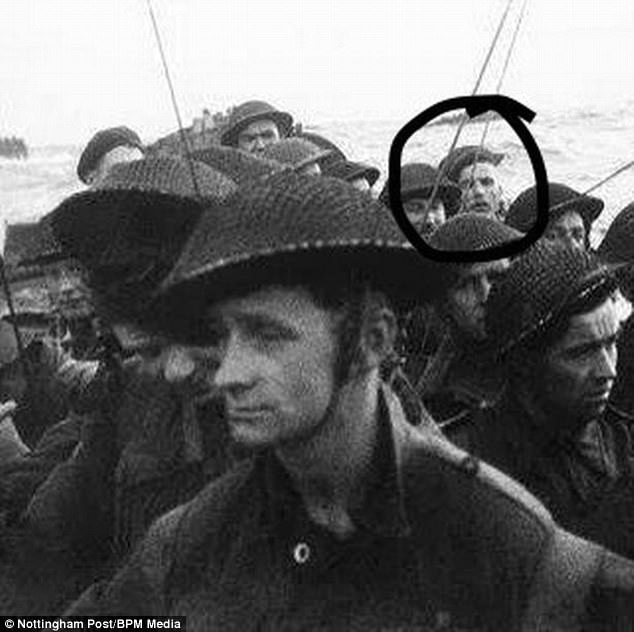 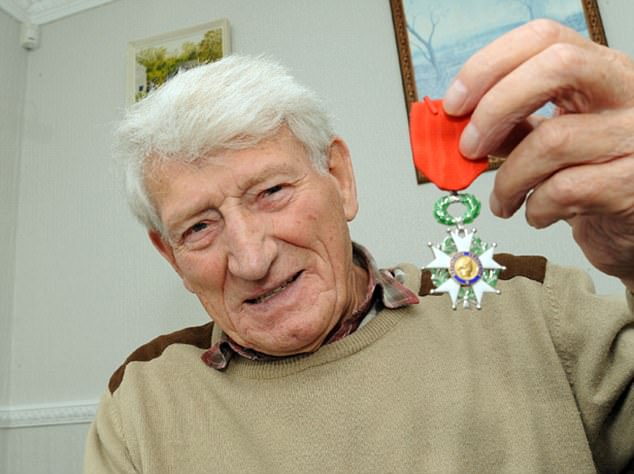 Mr Edwards explains that the prisoner of war camp, also known as Fallingbostel, had been liberated by the same British soldiers who liberated to the nearby concentration camp

‘When they were taking me off, I just saw this big crater and I jumped in it as a shell went off, and I got five more lumps of shrapnel in my body’

Lying badly injured in the field, Mr Edwards thought he would die.

But around an hour later, he was discovered by a group of German soldiers who took him to a house — they even offered him some bread.

He would be later transported to the prisoner of war camp Stalag 11b, close to Bergen-Belsen concentration camp.

Mr Edwards explains that the camp, also known as Fallingbostel, had been liberated by the same British soldiers who liberated to the nearby concentration camp.

He was taken back to Nottingham where he received further medical treatment.

It was there that army informed me that he may never be able to have children because of the wound.

Following the war, Mr Edwards returned to his job at Players, but later ended up working for the Co-Op bakery for 40 years.

Mr Edwards’ proud daughter, Wendy Newbold, 69, from Clifton, said: ‘He always said to my mum that they wouldn’t be able to have kids because of the injury, and mum always joked that she only married him because she thought they weren’t going to be able to have kids!’