The leadership of a home for aging veterans in Massachusetts where nearly 80 residents sickened with the coronavirus have died packed dementia patients into a crowded unit as the virus spread.

The move was one of several ‘utterly baffling’ decisions that helped the disease run rampant, investigators said in a report released Wednesday.

The superintendent of the Holyoke Soldiers’ Home, Bennett Walsh, was not qualified to run a long-term care facility and ‘substantial errors and failures’ he and his team made likely contributed to the high death toll there, investigators found.

Among them was a decision prompted by staffing shortages to combine two locked dementia units, both of which already housed some residents with the virus.

‘Rather than isolating those with the disease from those who were asymptomatic – a basic tenet of infection control – the consolidation of these two units resulted in more than 40 veterans crowded into a space designed to hold 25,’ the report said.

‘This overcrowding was the opposite of infection control; instead, it put those who were asymptomatic at even greater risk of contracting COVID-19.’

The superintendent of the Holyoke Soldiers´ Home was not qualified to run a long-term care facility and ‘substantial errors and failures’ he and his team made likely contributed to the high death toll there, investigators found 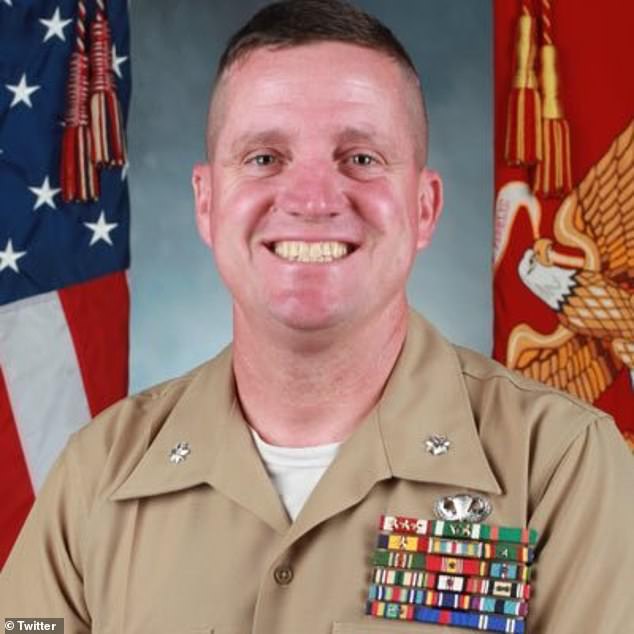 FIRED: Blame for the disaster at Holyoke has been placed mainly on the shoulders of Bennett Walsh (pictured), a well-connected former Marine who was appointed by Massachusetts Governor Charlie Baker in 2016

When a social worker raised concerns about the move, the chief nursing officer said ‘it didn’t matter because [the veterans] were all exposed anyway and there was not enough staff to cover both units,’ the report said.

One staffer who helped move the dementia patients told investigators she felt like she was ‘walking [the veterans] to their death.’ A nurse said the packed dementia unit looked ‘like a battlefield tent where the cots are all next to each other.’

The Failings of Holyoke Soldiers’ Home:

Others remembered the days in late March as ‘total pandemonium’ and a ‘nightmare’.

A social worker remarked how she felt ‘like it was moving the concentration camp, we were moving these unknowing veterans off to die.’

Another described sitting in a makeshift ward packed with sick and dying residents, some unclothed or without masks.

‘It was surreal,’ she said. ‘I don’t know how the staff over in that unit, how many of us will ever recover from those images.’

As the virus took hold, leadership shifted from trying to prevent its spread, ‘to preparing for the deaths of scores of residents,’ the report said.

On the day the veterans were moved, more than a dozen additional body bags were sent to the combined dementia unit, investigators said. The next day, a refrigerated truck to hold bodies that wouldn’t fit in the home’s morgue arrived.

Since March 1, 76 veterans who contracted COVID-19 at the home have died, officials said. Another 84 veterans and more than 80 staff have also tested positive.

The first veteran tested positive March 17. Even though he had been showing symptoms for weeks, staff ‘did nothing to isolate’ him until his test came back positive, allowing him to remain with three roommates, wander the unit and spend time in a common room, investigators said.

Supplies at a the veterans nursing home were also so depleted that staff were told to share intravenous morphine drips between the dying.

In at least one case as soon as a veteran died, his IV drip was unhooked and the half-full bag transferred to another resident.

And even after the first veteran at the Holyoke Soldiers Home in Massachusetts had tested positive, the management took away all protective masks from residents’ rooms to preserve them.

‘It’s been heartbreaking,’ certified nursing assistant Kwesi Ablordeppey, 49, told DailyMail.com in May. ‘When I try to sleep, I get nightmares. I see myself loading up a body bag and finding three more bodies in there.’ 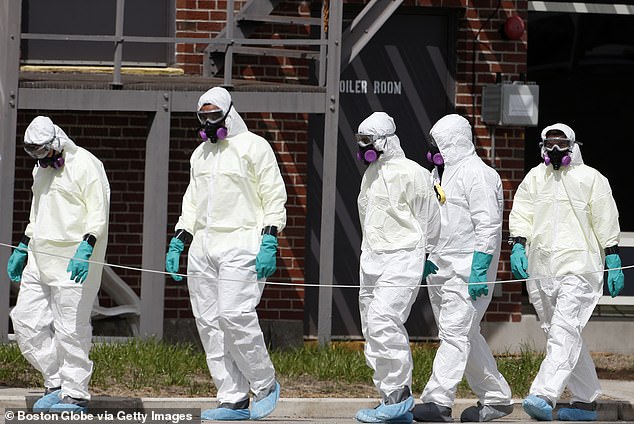 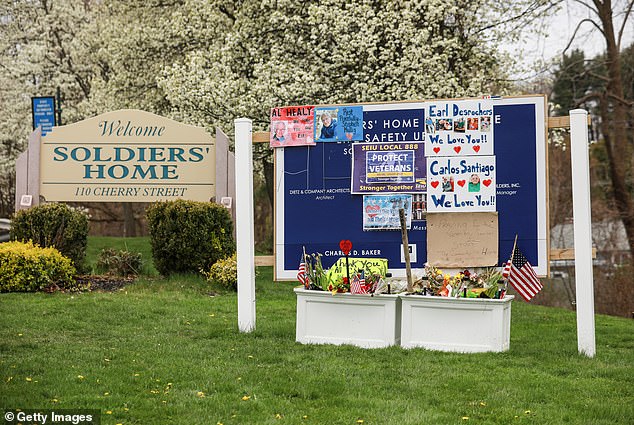 Even after the first veteran at the Holyoke Soldiers Home in Massachusetts had tested positive, the management took away all protective masks from residents’ rooms to preserve them 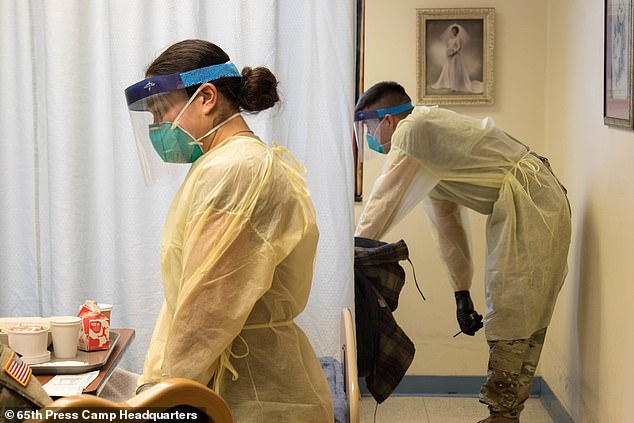 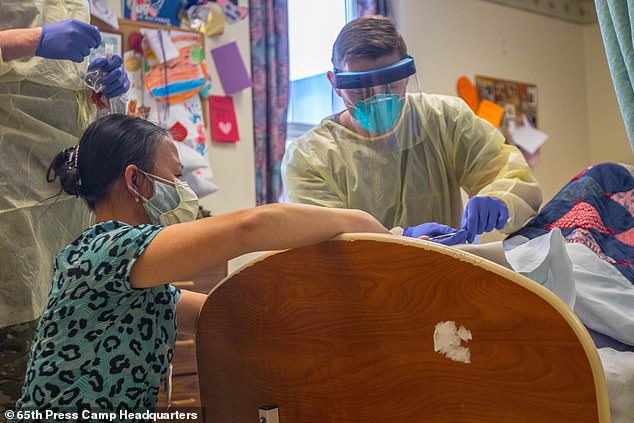 Army Spc. Chris DiCarlo, a medic with the Mass. National Guard Medical Command, and a staff member of the Holyoke Soldiers Home administer the COVID-19 test to a resident of the Soldiers Home

Among the other disturbing revelations in the report, was a claim that supervisors instructed social workers to call the families of sick veterans to persuade them to change their end-of-life health care preferences, so they wouldn’t be transferred to a hospital.

On social worker said she later refused to make anymore of the calls, saying ‘it felt wrong in the pit of my belly and heart’.

Staffers at the home also told investigators that they were initially discouraged from wearing protective equipment by their superiors in an effort to conserve their limited supply.

Staff said the instructions left them feeling ‘annoyed, paranoid and fearful for their lives because they could not find masks,’ according to the report.

‘In short, this was the opposite of infection control: Mr. Walsh and his team created close to an optimal environment for the spread of Covid-19,’ the report says.

The report also suggests that Mr. Walsh, who left the military after a distinguished 24-year career, was selected by the home’s Board of Trustees in part because his family is politically powerful in western Massachusetts.

An attorney for the superintendent, Bennett Walsh, said they dispute many of the investigation’s findings and are ‘disappointed that the report contains many baseless accusations that are immaterial to the issues under consideration.’

The lawyer said in an emailed statement that ‘Walsh reached out for help when the crisis erupted’ and sought National Guard assistance.

‘The failure of the Commonwealth to affirmatively respond to that request contributed to many of the problems outlined in the report,’ the attorney, William Bennett, said.

Walsh was placed on administrative leave March 30 and the CEO of Western Massachusetts Hospital, Val Liptak, took over operations.

Susan Kenney, whose 78-year-old father died in April after contracting the virus at the home, said she was horrified as she read details about veterans being denied basic care.

‘Action needs to be taken,’ said Kenney, the daughter of Air Force veteran Charlie Lowell. ‘We want this to never happen again.’

She later told CBS Boston: ‘Veterans that fought for our country just put together like cattle, it’s unacceptable, it’s horrible.’

Her father would  be turning 79 on Monday. She said her father’s death was ‘preventable for sure’.

The report said officials with the Department of Veterans Services were aware of Walsh’s ‘shortcomings,’ but failed to do enough about it. 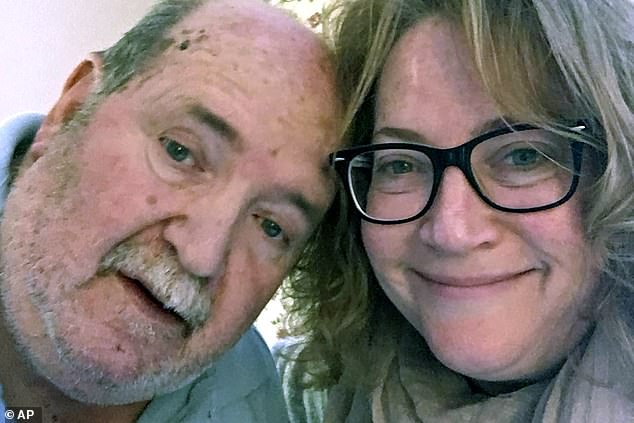 Susan Kenney made worldwide headlines when she scrawled ‘Is My Dad Alive?’ in blue grease crayon on the side window of her car when she drove to Holyoke to check on her father Charles Lowell (pictured together) 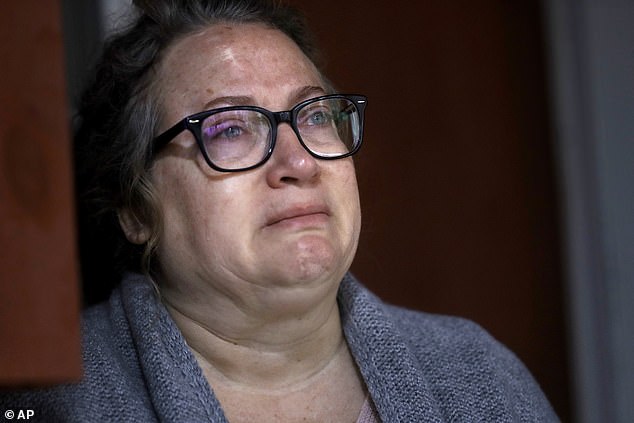 Kenney’s 78-year-old father died in April after contracting the virus at the home. She said she was horrified as she read details about veterans being denied basic care

The chief of staff for Secretary of Veterans´ Services Francisco Urena told investigators they thought Walsh was ‘in over his head’ and did not spend enough time at the home. But Urena allowed Walsh to remain in his job.

Urena told reporters late Tuesday he was asked to resign ahead of the release of the report.

Republican Gov. Charlie Baker, who hired former federal prosecutor Mark Pearlstein to conduct the investigation, called the details in the report ‘nothing short of gut-wrenching.’

Baker acknowledged that his administration did not properly oversee Holyoke or the home’s superintendent.

‘The loss of life is difficult to even think or speak about. The events that took place at the Holyoke Soldiers´ Home in March are truly horrific and tragic,’ Baker told reporters at a news conference.

And the U.S. attorney’s office in Massachusetts and Department of Justice’s Civil Rights Division are looking into whether the home violated residents´ rights by failing to provide them proper medical care. 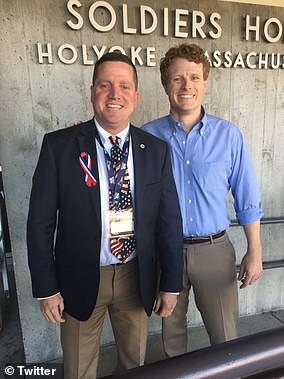 Attorney Bennett, who is Walsh’s uncle and a former Hampton County district attorney, told DailyMail.com his nephew has nothing new to add. His full statement is below:

Governor Baker has initiated a full review of my actions as Superintendent of the Holyoke Soldiers’ Home. I am cooperating with this investigation and thus far I have been interviewed on two occasions by investigators. I am committed to full participation in the process.

There have been widespread reports in the media that state officials were kept in the dark about what was happening at the Soldiers’ Home during the Covid-19 crisis. These reports are false.

We provided updates on a daily basis, sometimes multiple times a day. These updates were by phone, text, email, conference calls and official report forms. These updates were made at various times to the staffs of the Secretary of Veteran Services (DVS), the Executive office of Health and Human Services (EOHH) and the Department of Public Health (DPH).

Specifically, as of Friday afternoon March 27, we had notified state officials that:

: 28 veterans had exhibited symptoms of the coronavirus and samples had been collected and sent for testing

: these 28 veterans were living in different locations

: test results for 13 had been received

: 10 veterans were positive and 3 were negative

: test results for 15 veterans were pending

: 2 veterans had died; 1 with a positive test result and 1 with test results pending.

Events were happening rapidly and these statistics were again updated in the early evening when the test result for the second veteran who had died was determined to be positive. There were now 2 confirmed coronavirus related deaths.

The first veteran who showed symptoms resided in North 1. The first veteran who died with a confirmed positive resided in North 2. These veterans were on different floors and physically separated from each other. It was clear that the virus was not confined to one area but was infecting veterans throughout the facility and our medical resources were stretched to the limit.

At mid-day Friday March 27 I requested that National Guard medical personnel be sent to the Soldiers’ Home to assist our staff. That request was denied.

We also notified state officials that we were in a crisis mode regarding staff shortages. 25 % of the workforce was not reporting to work. These work shortages, and the knowledge that our veterans were extremely vulnerable to the virus, were taking a toll on the staff who had reported for duty. I requested trained grief support counselors to assist our staff who were dealing with the hardest hit units.

The staff shortage was so acute, and the number of Veterans with known or suspected Covid-19 so large, that the medical staff was forced to close some areas and place these men in the same unit. This action to ‘cohort’ the veterans was reviewed with the Department of Public Health on Wednesday March 25 and accomplished on Friday March 27.

Between Friday night and Sunday morning 6 more veterans died bringing the total number of deaths to eight. By Sunday afternoon we had determined that 4 deaths were positive for the coronavirus and 4 deaths had test results still pending. The delay in getting test results was frustrating to all. This information was reported to state officials on Sunday afternoon at about 4:30 pm.

It is very disappointing to me that during this time of unspeakable horror the staffs at EOHH, DVS and DPH have remained silent and have let the lie that they didn’t know what was going on persist.

State officials knew that Holyoke needed as much help as possible. No one was kept in the dark.

It is gut-wrenching to observe the devastation the virus has caused my fellow veterans. These are men I helped to care for with affection and respect. I again express my sincere sympathy to their families.