A family’s beloved pet labrador underwent emergency surgery amid fears he had a deadly tumour but doctors discovered something far less harmful in his stomach.

Monty, a seven-year-old black labrador from Orange in New South Wales, was taken to Canobolas Family Pet Hospital on Easter Monday after his owners noticed he was weak and uninterested in his food.

The veterinarians found that Monty was weak, pale in the gums, had an enlarged abdomen and was anaemic from his so-called mystery illness.

Monty, a seven-year-old black labrador, (pictured) was taken to Canobolas Family Pet Hospital on Easter Monday after his owners noticed he was weak and wasn’t interested in his food

After two rounds of x-rays to investigate potential ulcers and obstructions of the gut, the clinic feared Monty may have multiple tumours.

‘The contrast images showed his intestines were functioning normally, the stomach was emptying normally, but also there was something just not quite right going on in the stomach,’ the clinic wrote on Facebook.

Monty’s owners chose to progress with an endoscope procedure when the veterinarians found a foreign body in his stomach. 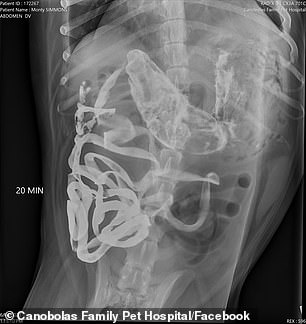 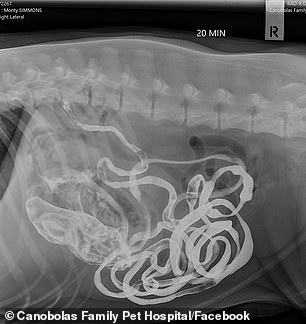 After two rounds of x-rays to investigate potential ulcers and obstructions of the gut, the clinic discovered foreign bodies inside his stomach (pictured)

The beloved pooch was rushed into surgery and underwent a life-saving blood transfusion from a donor greyhound for the procedure.

‘The next morning Monty went in for surgery where we found not one, not two, not three but four socks in his stomach,’ the clinic said.

The socks were the cause of chronic irritation and bleeding in the stomach which led to the anaemia.

Monty made a full recovery in 24 hours and was sent home to the relief of his owners. 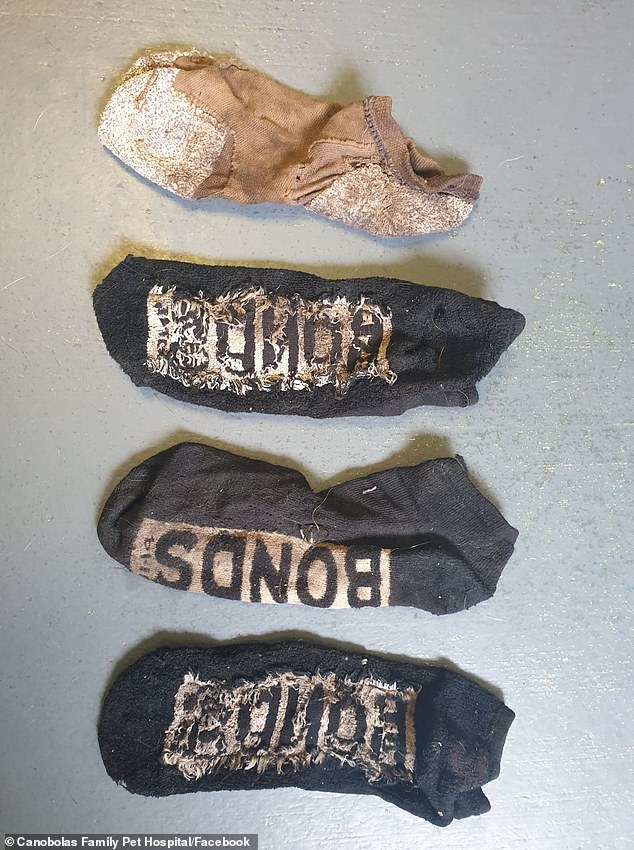